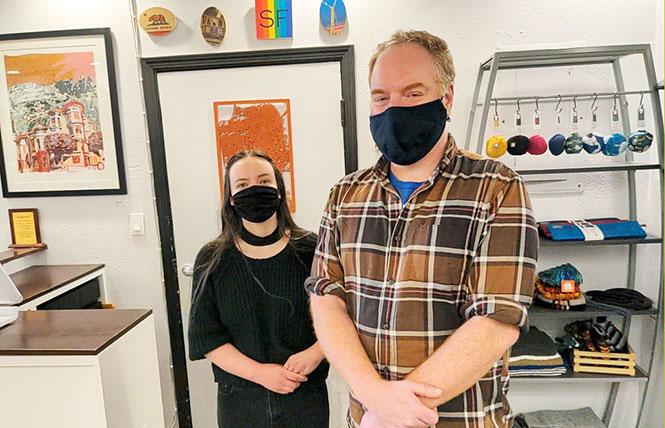 While few people will likely forget the silent pall that fell over San Francisco beginning two years ago March 17 with the COVID-19 lockdown, businesses in the LGBTQ Castro neighborhood are still struggling with the fallout from the impact of the pandemic.

"While demand has dried up due to the lack of tourists and shelter-in-place mandates, city mandates around capacity limits, opening dates, and a lack of transparent rollouts of programs have been devastating. Various sectors have been affected in disparate ways," the report states.

One can see that firsthand in the Castro.

Local Take, a shop specializing in San Francisco-made crafts at 3979-B 17th Street, fared reasonably well, said assistant manager Andy Eaglesham. While traffic fell notably in the early days of the pandemic, the shop's online business kept things going as did its pop-up at Green Apple Books in the Richmond (that effort closed last summer).

"People were happy to come back again," said Eaglesham, a straight ally, once things began opening up in earnest.

"We had a big uptick over the holidays," he said, but shipping delays due to supply chain issues have caused their own problems, too.

Around the corner and down the street at Fabulosa Books (489 Castro Street), formerly an outlet of Dog Eared Books in the Mission, the bookstore closed during the first few months of the pandemic but reopened in June 2020. Business dropped pretty dramatically, said Alvin Orloff, the shop's "extra gay" owner, and "stayed very, very quiet for the year after."

At its worst point, he said, business was down 40%. While some online sales helped, the shop was able to count on a "loyal fan base," who also made donations to then-owner Dog Eared Books to help cover that lost three months of rent. Orloff, the former manager, bought the Castro location last summer, as the Bay Area Reporter previously reported.

Orloff had no interest in ramping up online sales, though.

"We are very in-person," he said. "We didn't want to make an effort to compete with Amazon on sales."

Orloff said he's looking forward to the resumption of business at the Castro Theatre because the bookstore used to receive a lot of cross business from people attending shows at the movie palace. As a result of the theater's closure, the shop is still running on reduced hours because there's little point in being open without that evening foot traffic the theater brings. (Another Planet Entertainment has taken over programming of the theater and expects to open for some film festivals this year as it undergoes renovations.) 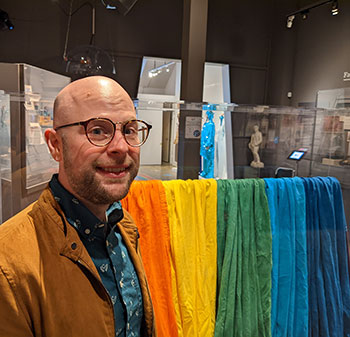 "We'll survive because people love bookstores and people are very kind," he told the B.A.R.
The pandemic presented the folks at the GLBT Historical Society Museum at 4127 18th Street with an opportunity to focus on its digital archives, said Andrew Shaffer, the gay interim co-executive director of the institution for the past six months. But it wasn't necessarily easy.

With the museum closed for much of the pandemic, "We pivoted to a lot of online programming," Shaffer said.

Even though most of the society's volunteers moved on, it was able to retain its paid staff, many of whom found themselves shifted to other responsibilities. The drop in museum foot traffic — and consequent gift shop sales — meant a $200,000 loss to the society's $1.3 million dollar budget. Bringing in new people, and new benefactors, was a challenge and the society saw a significant drop in donations.

"It was definitely hard for us," said Shaffer.

David Gray, the owner of Hortica, a plant and gardening store he's owned at 566 Castro for 17 years, almost seemed to shrug off the challenges of the pandemic. He did have to work to convince city officials his was an essential business, however, which enabled him to stay open even when so many other businesses were closing.

"I argued I was an essential business because I sold plants and seeds," he said in an interview at his shop. Things that could be used to produce food. Essential or not, he saw a dramatic drop in business early on. Otherwise, he said, he was masking up, putting out hand sanitizer, and wiping down everything repeatedly.

He quickly brought up what he regards as the real challenges he faces as a business owner on Castro: declining foot traffic due to so many empty storefronts and the increasing population of homeless and mentally ill folks on the street.

Across the street, at Aegean Delights (545 Castro Street), Dmitra Fanourgiakis, who owns the Turkish sweets shop and import store with her husband, also downplayed the impact of COVID on her business. That's not to say things are necessarily going well.

Things are "not good," she said inside her shop near the counter filled with colorful, imported Turkish sweets and pastries. "We are trying."

Unlike most of the other businesses on Castro which were already in place when COVID hit, Aegean Delights opened a year ago. Hardly an auspicious beginning but Fanourgiakis feels her greater struggles have been with a city that doesn't do much to help small businesses. She's frustrated with the thin foot traffic on her block of the street due to numerous empty storefronts, and frustrated, too, with the fact that, during street festivals and closures, her block isn't included. Typically, street closures have only involved the 400-block of Castro and the 18th Street intersection the year the shop has been open.

"We need more tourists," she said.

Fanourgiakis may get some help. San Francisco Mayor London Breed this week began a 10-day visit to four European cities to encourage tourism. The trip, arranged and paid for by San Francisco International Airport, which has a separate budget from the city, will include Breed meeting with airlines and other officials in London, Brussels, Frankfurt, and Paris.

"We have a lot of work to do to get our economy going again and we need to do everything we can to bring visitors back to this city," Breed stated in a news release. "Tourism is essential to providing jobs and support for our restaurants, hotels, small businesses, and the arts, as well as the revenue that allows us to deliver all the support and services for those in need."

As COVID pandemic eases, STD epidemic on the rise