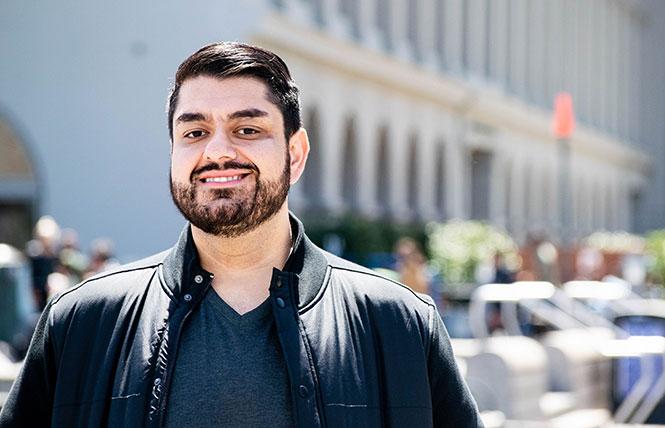 When a Chabot-Las Positas Community College District Board of Trustees member resigned due to relocating, the search was on to find an appointee to fill the vacancy through the end of 2022. The elected leaders of the Alameda County college district found that person in Harris Mojadedi.

The Union City resident took his oath of office for the district's Trustee Area 3 seat February 15 and will seek a full four-year term on the November ballot. Should he win, Mojadedi believes he would be the first gay Afghan American to be elected to public office in the U.S.

His serving on the college board marks the first time an LGBTQ Muslim has held public office in the Bay Area. Mojadedi's appointment comes four years after Hayward City Councilmember Aisha Wahab, who is straight and running for state Senate this year, made history as one of the first two Afghan Americans elected to public office anywhere in the country.

"I don't know many out Afghan or Muslim people in general, let alone serving in a public office," Mojadedi, 31, told the Bay Area Reporter during his first media interview since being named to the college board.

There are five out Middle Eastern/Arab Americans listed on the map of LGBTQ elected officials in the U.S. maintained by the LGBTQ Victory Fund. Two are from Southern California: lesbian West Hollywood City Councilmember Sepi Shyne, elected in 2020 as the first out LGBTQ Iranian to public office, and gay Fullerton City Councilmember Ahmad Zahra, who grew up in Syria and in 2018 became the first LGBTQ Muslim council member in the country.

Mojadedi plans to officially announce in April his candidacy on the fall ballot for a full term in his college board seat.

"I am in it to win it," said Mojadedi, who is on board of the California Democratic Party's Asian and Pacific Islander Caucus.

The seven-member college board oversees Chabot College in Hayward, where Mojadedi took classes while in high school, and Las Positas College in Livermore. Tim Sbranti, president of the college board, noted he and his colleagues had "carefully reviewed" a trio of "impressive applicants" who were all "uniquely qualified" to serve.

But they felt Mojadedi was best suited to represent the district's Trustee Area 3 that includes Union City and South Hayward.

"We are pleased with the selection of Harris Mojadedi and feel that his spirit of service and professional experience will be a great addition to our board and the district," stated Sbranti.

Mojadedi earned his master's degree in leadership studies from Saint Mary's College of California. He earned a B.A. in political science with a concentration in public policy from San Jose State University. He works as a policy analyst in the vice chancellor of student affairs office at UC Berkeley, focused on the university's diversity, equity, and inclusion work.

Mojadedi's parents emigrated from Afghanistan three decades ago. He was born in Fremont, the youngest of five siblings, and has lived in the East Bay's tri-cities area for most of his life.

He spent six years serving on the Union City Planning Commission and the Alameda County Human Relations Commission, chairing both, until stepping down from the oversight bodies in 2020. In 2018, still in the closet, Mojadedi lost his bid for a city council seat in Union City.

After the botched U.S. withdrawal from Afghanistan last summer, which ended America's 20-year war in that country, Mojadedi felt it important to again be involved in public service. He hadn't thought about running for a college board seat, but when the opportunity to apply for the vacancy came up, he decided to submit his name for consideration.

"I have had experience with higher education my whole professional life," said Mojadedi. "I have seen what community colleges can do. They help teach people English language courses and provide professional education."

He also wanted to ensure the LGBTQ community is reflected in local leadership. Mojadedi believes he is the first out person to serve on his community college board.

"We need queer presentation," said Mojadedi. "Me being Muslim, Afghan and openly gay, there is a certain lens I bring to that."

Raised in a Muslim household, Mojadedi is not a current member of a local mosque. Nonetheless, he identifies as Muslim and is "very spiritual," he told the B.A.R.

He came out to his family on National Coming Out Day, October 11, in 2020. To this day some relatives refuse to speak to him.

"It has been a very difficult adjustment, if I am being honest," said Mojadedi, who also identifies as queer.

Just as stressful have been the last seven months, as he has spoken out about the need to resettle people from Afghanistan fleeing the country now that it is under Taliban control. He helped host town halls with members of Congress and worked with city leaders across California on the adoption of local resolutions in support of helping Afghan refugees.

"It has been hard on a personal level," said Mojadedi, noting he has relatives still living in the country. "I would say we need to continue to admit refugees and help those who need to leave Afghanistan; there are many queer Afghans and still so many people at risk."

He demurred when asked about President Joe Biden's handling of the chaotic pullout of American troops last August. Instead, Mojadedi said his focus is on the current needs of Afghan refugees and those still trying to leave the country.

"What is done is done," he said. "We need to think about services for people who have been resettled."

Community colleges can play a part in that work, he noted, by offering English classes to immigrants from various countries as they reestablish their lives in the U.S. Being given a platform to advocate for such resources as an openly gay college board trustee is a position he does not take lightly, Mojadedi told the B.A.R.

"It is not lost on me I am Afghan, Muslim, and gay, and I get to be all three of those things and live my truth in service to my community. That is not possible in parts of our country right now, even in parts of our state," he said. "It is an honor, and I look forward to bringing all of my identities to the decision-making process. Our students deserve that."