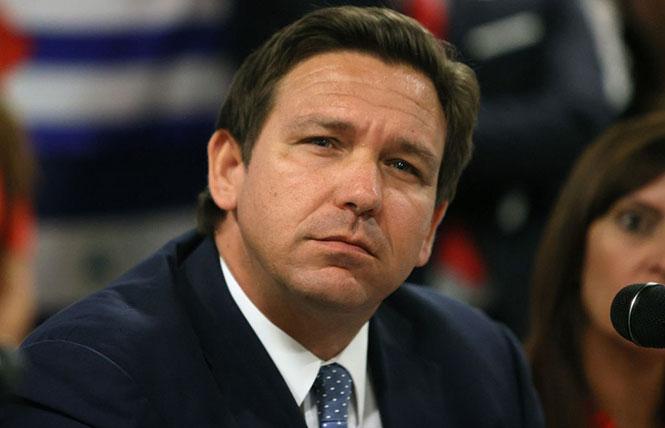 It's likely that Florida is about to become the first state in the U.S. to have a Russian-style anti-LGBTQ propaganda law. Republican Governor Ron DeSantis, who's up for reelection this year, has indicated he will sign the so-called "Don't Say Gay" bill, which passed in the Florida House and state Senate. While its Russian counterpart signed by President Vladimir Putin in 2013 is much broader and prohibits distribution of any information about LGBTQs to minors, Florida House Bill 1557, the Parental Rights in Education bill, would prevent teachers from talking about LGBTQ+ issues or people in kindergarten through third grade. It would undermine existing protections for LGBTQ+ students. Florida is dominated by Republican lawmakers and DeSantis is widely considered to be a 2024 presidential candidate. In a craven display to incite their conservative base, Florida Republicans are forcing teachers to pretend LGBTQ people don't exist or are expendable by passing a law that prohibits mentioning them in school classrooms.

The Human Rights Campaign, along with numerous other LGBTQ rights groups, has condemned the bill. "The Florida Legislature is playing a dangerous political game with the health and safety of LGBTQ+ kids," stated Cathryn M. Oakley, HRC's state legislative director and senior counsel. "Discriminatory pieces of legislation like the 'Don't Say Gay or Trans' bill don't solve any critical issues in Florida. Instead, these bills shamefully attack and endanger LGBTQ+ students who are just trying to get a quality education, whom the state has an obligation to treat fairly and protect."

Caught in the middle are teachers, many of whom just want to do their jobs and educate their students, including on LGBTQ issues when relevant. These days most students aren't afraid to come out and often they have supportive environments at school to be themselves. Many youth come out at an early age compared to even a few years ago. That is all threatened by the Florida bill.

Thankfully, the federal government is standing with LGBTQ+ students and their families. On Tuesday, the U.S. Secretary of Education Miguel Cardona issued a statement that read, "Leaders in Florida are prioritizing hateful bills that hurt some of the students most in need."

"The Department of Education has made clear that all schools receiving federal funding must follow federal civil rights law, including Title IX's protections against discrimination based on sexual orientation and gender identity," Cardona wrote. "We stand with our LGBTQ+ students in Florida and across the country, and urge Florida leaders to make sure all their students are protected and supported."

Florida politicians know that there are lots of LGBTQ+ families in the Sunshine State. Many of them probably know LGBTQ people themselves. HB 1557 is a cynical attempt to pander to religious conservatives, even as the Public Opinion Research Lab at the University of North Florida released a poll showing that 49% of Floridians oppose the legislation while only 40% approve. What's even more shameful is that many of these same leaders mourned the loss of life at the June 12, 2016 Pulse nightclub shooting in Orlando when 49 mostly gay Latinos died. In fact, last year, on the fifth anniversary of the tragedy, DeSantis tweeted that the state "honors the memories of those who were murdered on one of the darkest days in Florida's history." He even signed a resolution declaring "Pulse Remembrance Day." Of course, days before he signed the Pulse resolution, DeSantis kicked off Pride Month last year by signing an anti-trans bill. That resulted in Florida being added to California's banned taxpayer-funded travel list for state employees and college athletic teams. DeSantis signed into law legislation requiring transgender youth to play on sports teams based on their sex assigned at birth.

Five years ago, an ISIS-inspired terrorist took 49 innocent lives at Orlando's Pulse Nightclub. Florida honors the memories of those who were murdered on one of the darkest days in Florida's history. pic.twitter.com/p8tRFV8sJ9— Ron DeSantis (@GovRonDeSantis) June 12, 2021

Texas isn't any better. Governor Greg Abbott and Attorney General Ken Paxton, both Republicans up for reelection this year, are going after trans kids. Abbott issued a directive based on an opinion from Paxton, to have the state child welfare agency investigate trans health care as child abuse. Unlike the situation in Florida, however, Abbott's decree isn't a state law — yet, but it has resulted in uncertainty and confusion for trans kids and their families.

For more than a year, various conservative-led states have targeted LGBTQ people, mostly trans youth. It's part of a pattern to fear-monger and marginalize queer people. Right-wing groups like the Heritage Foundation, Alliance Defending Freedom, Eagle Forum, and others "are at the helm of this effort," Oakley stated, "seeking to use LGBTQ+ rights as a political wedge." Last year, lawmakers in 34 states introduced 147 anti-transgender bills. And just introducing these bills has had a chilling effect in those states.

Shortly before the 2020 presidential election, HRC and Hart Research Group conducted a poll of 10 swing states. It found that at least 60% of Donald Trump voters across each of the 10 swing states — Arizona, Florida, Michigan, Pennsylvania, Wisconsin, Georgia, Iowa, North Carolina, Ohio, and Texas — said that trans people should be able to live freely and openly. (The survey was based on interviews with 400 likely voters in each state.) And 87% of respondents across each of the states said transgender people should have equal access to medical care. Yet despite these encouraging numbers, many Republican politicians, hoping to curry favor with their base or the former president, keep ramping up these discriminatory policies and laws. It's past time to let students be students and to receive the support they need no matter how they identify.