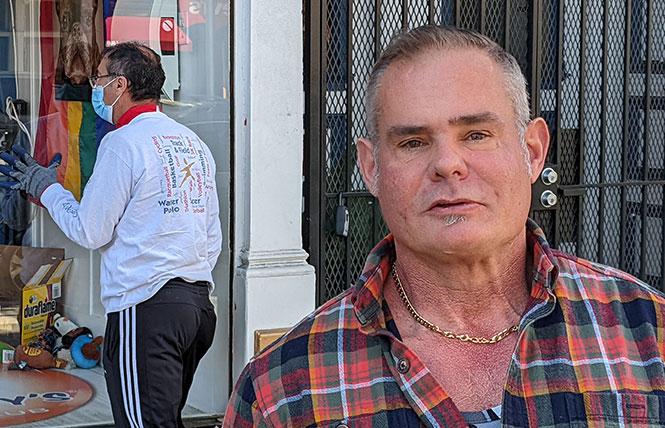 Todd Ahlberg stands in front of his dog-grooming business, Mudpuppy's, as a workman replaces the shop's windows following a vandalism incident the night before. Photo: Eric Burkett

After a chilly weekend, it was a beautiful, warm Monday morning in the Castro. A promising start to the week, unless you happen to own Mudpuppy's.

The night before, March 6, someone smashed the large plate glass windows of the 10-year-old dog grooming shop, which hung over the holding pens where their canine clients await their turn with their groomers. By Monday morning, two workmen were busy installing new windows. Inside, co-owner Todd Ahlberg was feeling frustrated with what was only the latest in an ongoing stream of vandalism on Castro Street that have become seemingly routine.

"If there had been a dog in the window, they'd have been killed," said Ahlberg, a gay San Francisco native.

He had heard the attack - and Ahlberg feels strongly it was an attack - from his apartment upstairs above the shop. Running downstairs, he saw who he said was a man he recognized throwing benches from a neighboring ice cream shop into his storefront.

The suspect, said Ahlberg, was a guy he'd seen around the neighborhood for the past two months, a guy he'd seen allegedly smoking meth, a guy who had been taken in by police recently after behaving erratically, naked and dragging a blanket at 18th and Castro, only to show up on the street again two days later.

City public safety officials said the problem is common not just in the LGBTQ San Francisco neighborhood but also up and down the state.

"What you're talking about is a larger social issue that is daunting to the state of California," said David Burke, a civilian with the San Francisco Police Department who serves as District 8 public safety liaison. "These people should be in mental institutions that we don't have. If we don't have that, what do you think is going to happen?

"The police are out there doing their job," said Burke, a straight ally. "We do everything that we can. What we're talking about is a much larger societal problem that we're not going to arrest our way out of."

Ahlberg's frustration is nothing new. Many of his neighbors feel much the same. Vandalism is a serious problem brought in, they say, by the large numbers of homeless and mentally ill folks who come to the Castro to hang out or to pitch their tents for shelter. At a meeting of the Castro Merchants Association only five days before Ahlberg's shop was vandalized, Paul Perretta, co-owner of Hot Cookie, complained of vandalism at his store. Someone had smashed a window then stolen his shop's delivery app tablets.

Gavin McEachern, captain of SFPD's Mission Station, suggested adding additional safety protective measures, such as roll-down gates, but acknowledged "they're unsightly and that may not be an option for you."

The captain offered to send a security expert to Perretta's store to discuss other options, as well. It was important, too, McEachern said, to report these sorts of incidents.

If it doesn't get reported, he said, "I don't know about it."

Gay Supervisor Rafael Mandelman, who represents District 8 that includes the LGBTQ Castro neighborhood, is frustrated, too, he said in a phone interview with the Bay Area Reporter.

"Vandalism is not new," he said. "The neighborhood has been struggling with this since, at least, I came to office."

Suspicions by some of the Castro's merchants that much of what they're seeing is a result of the recent emergency declaration in the Tenderloin put in place by Mayor London Breed and the Board of Supervisors last December don´t play out, said Mandelman. The perception is that potential troublemakers have been forced out of that troubled neighborhood and have moved to the Castro.

"I have not heard the police say that's the case," Mandelman said.

He instead points to a litany of issues that have, unfortunately, come together turning the Castro into what he described as "ground zero." While numerous neighborhoods in San Francisco are dealing with similar issues, and leaving merchants with the costs, "it's really at its absolute worst in the Castro. And that really has to do with the acuity of the folks there, the degree of their addictions and their mental health issues."

At the merchants meeting, Mandelman told attendees, "The experiment of not [prosecuting] property crime is not working for San Francisco. We need to come up with some kinds of accountability. Many folks are being sent out repeatedly with ankle monitors but it's not working. We'll be figuring this out for years to come. It's important to prosecute people when they're caught.?" 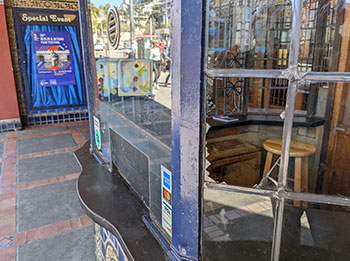 Broken windowpanes at the Castro Theatre's ticket booth like this one are a common occurrence, according to Another Planet Entertainment, which has taken over programming at the movie palace. Photo: Eric Burkett

Mandelman acknowledged that, over the past month, there does seem to have been more vandalism and troubles than usual. On the whole, rates of violent and property crimes are up all over California. The San Francisco Bay Area is seeing, for property crimes, the highest rates of all.

"In 2020, property crime in California reached the lowest level since 1960 (as far back as consistent crime statistics go), but in 2021 property crime in these four cities trended upward,¨ according to a report last December from the Public Policy Institute of California [https://www.ppic.org/blog/after-decreases-in-2020-both-property-and-violent-crimes-are-up-in-2021/]. Property crime rose nearly 7% (ranging from about 3% in Los Angeles to 13% in Oakland), when comparing the first 10 months of 2021 and 2020. After hovering around 20,000 reported property crimes per month in early 2021, the numbers have increased, reaching 25,000 in October, the highest monthly total since the beginning of the pandemic - and roughly the same number as before the pandemic.

COVID-19 lay behind many of those low 2020 figures; lockdowns and curfews kept potential criminals at home. But that was then.

Wander Castro Street now, and it's easy to find people who are increasingly alarmed by what they see as an increase in property crime. Just down the block from Mudpuppy's, at Harvey's on the corner of 18th and Castro streets, bartender Erik Leve has seen plenty of things that leave him, a 15-year Castro resident, feeling overwhelmed.

"The amount of craziness on this corner has really increased," he said from behind the bar, "it's wearing down on all of us."

Up at the Castro Theatre, the ornately tiled ticket booth has been vandalized, a fact noticed by Ahlberg on his way to the gym earlier that day. One of the panels in the leaded windows has been smashed. That's nothing new, said Margaret Casey, a straight ally who's project manager for Another Planet Entertainment, which has just taken over management of the historic movie palace.

She pointed to another missing panel at the back of the booth, next to the door and its lock. It's been broken numerous times over the years by people attempting to break into the enclosure hoping, perhaps, they´ll find something of value. They don´t, of course, and the cost of replacing the panel is too much, as it would mean replacing several more panels, all lined with lead, above it, she said.

There's a list of annoyances she and the theater staff face on a regular basis. About once a week, she can count on someone attempting to jimmy open a poster display, and three times a week, the theater pays to have the entryway and sidewalk power-washed, to clean away all the food, urine, and feces that are left there.

The GLBT Historical Society tweeted March 8 that last weekend someone attempted to break a large street-facing window at its museum on 18th Street in the Castro. The incident was reported to police. No staff or visitors were hurt, but a passerby who intervened was injured, society officials wrote. The society stated that the museum staff is reviewing safety protocols.

Frustrations grow
Next door, at Castro Coffee Company, owner Ken Khoury has become more frustrated with increasing rates of crime on the street. Standing behind the counter of his fragrant, tightly packed little shop, he offers a list of petty - and not so petty - incidents he's witnessed personally.

There´s the guy who attempted recently to steal the store's tip jar, he said, and the guy who tried reaching into the purse of a woman in his shop who was waiting for service. And then there's the time a few months ago one of his employees was attacked with a metal bar by a guy on a bike.

"There's a lot of mental illness," he said. "Sometimes it's violent."

Khoury has been running his store for 35 years. "This neighborhood means a lot to me," he said, but "people don't come here because it isn´t safe."

Outside Khoury´s shop, James King sits at one of a handful of tables as he frequently does, drinking coffee with friends. A native of the neighborhood, he's watched it evolve over the years from a vibrant district with full sidewalks to a place with increasing numbers of empty storefronts.

He, too, can reel off a list of things he's seen on the street, from the tent that's been in place at the corner of Market and Castro streets for the past month to the time he saw a man break into a rented scooter, remove the helmet, and then use it to smash storefront windows as he made his way down the street, all in broad daylight. Recently, he said, he suggested a number of neighborhood sites to visit to a family of tourists. Ten minutes after they left him, he saw them again, he said, hurriedly leaving after being traumatized by some of the street's unrulier denizens.

Of course, there are other problems, he pointed out. Even double-income couples can no longer afford to live in the neighborhood, and numerous empty storefronts only decrease foot traffic.

"The bottom line is, it's not inviting," he said.

Mandelman probably wouldn't disagree with some of King's takes on what's happening in the Castro.

The single biggest problem, he stated, is the lack of beds and facilities for homeless people. "We have a large number of people living unsheltered in the street, using substances and exhibiting behaviors that are bad for the community," Mandelman said.

"In San Francisco, these kinds of petty crimes don't get any jail time at all," Mandelman said. "We don't have a robust public health response ... so the front lines, the people who deal with this everyday, those are the merchants and they're being asked to do things they shouldn't have to."