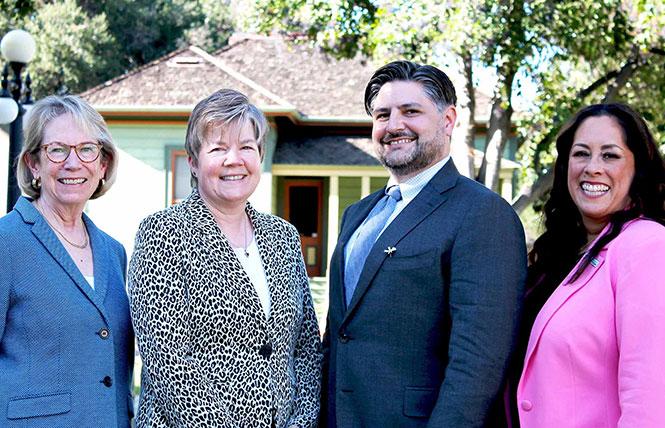 Becoming a judge in California is not easy, as most jurists are appointed by the governor after applying and waiting a year or more. The number of LGBTQ judges in the state increased in 2021, according to data released by Governor Gavin Newsom's office, and there are now at least 83 out members in the judicial branch, according to data from the state and the Bay Area Reporter.

Three of Santa Clara County's six out judges recently participated in a panel discussion and talked about their career paths and what it means to create welcoming courtrooms. Ken Yeager, a gay man and executive director of the Bay Area Municipal Elections Committee Foundation, which sponsored the event, invited the trio as part of the organization's focus on South Bay LGBTQ history.

"If I had to take a test on 'Jeopardy!' on how many we had and who they were, I would have probably failed it," said Yeager, a former county supervisor and San Jose City Councilmember.

In the process of reaching out to the jurists, he discovered how "remarkable" they all are, he said. Judges Julie Emede, Charles F. Adams, and Jessica Delgado took part in the February 12 panel at San Jose's History Park. The other three, Judges Jacqueline Arroyo, Beth McGowen, and Shawna Schwarz, who was the county's first out jurist, were unable to participate.

"It's very important for the LGBTQ community to really know who these community leaders are," Yeager said.

An estimated 30 people came out to the park to listen to the judges speak. The event took place outside of the "Coming Out: Queer Silicon Valley" exhibit that the B.A.R. previously reported on.

Speaking about their experiences and what they bring to the county's courts and the people who enter their courtrooms, the judges were humble and thoughtful. The judges spoke about their unusual journeys to the bench, being out in the courtroom, and creating welcoming courtrooms that are inclusive.

A Midwestern woman, Emede, 60, came to California to live her life freely. She started her career in the technology industry at Hewlett-Packard, managing products for Asia. While working there, she decided to go to law school and follow her teenage vision to be an attorney and a judge.

"In the back of my head, I thought, 'Well, if it doesn't work out, I'll just go back into business,'" she said about going to UC Hastings College of the Law in San Francisco. "Fortunately, it did work out and it's really what I wanted to do."

She came out in law school and didn't look back, finding herself appointed to the Santa Clara County Superior Court by Republican former Governor Arnold Schwarzenegger in 2009. She took her seat on the bench in 2010.

Adams, a 43-year-old gay man born and raised in the San Francisco Bay Area, practiced civil litigation and family law before becoming a research attorney for Santa Clara County Superior Court. He then became a staff member for U.S. District Judge Edward John Davila in the U.S. District Court for the Northern District of California. Assisting judges with legal research for cases, he realized that he wanted to become a judge himself.

The opportunity came when former Governor Jerry Brown (D) appointed him to the bench in 2018. Adams spoke about hesitating when faced with the question to list his last nine courtroom cases. He hadn't argued a case in court for about nine years at that point, he said. Fortunately, he had support from the very judges he worked under, especially Davila, who coached him through the vetting process, he said.

"I have a lot to thank from family court. My job. My partner," of 13 years, who also works in family court, Adams said.

He said that he wouldn't be on the bench without Davila, who told him, "You could do this actually. You could become a judge," Adams recalled.

The path to becoming a lawyer, much less a judge, wasn't something that seemed like it was on the horizon for Delgado, 53, when she was outed in high school and kicked out of her central Texas home at the age of 16. Homeless and searching for a place to be out and safe, she and her girlfriend at the time made their way to Santa Cruz.

A group of queer attorneys, including her future wife, a public defender, took her in and encouraged her to become a lawyer. She worked her way through Cabrillo College then attended UC Berkeley School of Law. She started her career working in the public defender's offices in Monterey and Santa Clara counties.

She said she is very proud Newsom (D) appointed her to the court in 2021. His decision to order city officials to issue marriage licenses to same-sex couples in 2004, when he was mayor of San Francisco, was a profound moment for her family, she said.

(While those marriages were vacated by the state Supreme Court, it ruled in May 2008 that same-sex couples could marry after it overturned Proposition 22. Later that year, voters passed state Proposition 8, which then put an end to the nuptials, though the ones that occurred during the brief window were legal. After a trial in 2010, federal Judge Vaughn Walker, who came out as gay afterward, ruled Prop 8 unconstitutional. His decision was upheld on appeal and, in 2013, the U.S. Supreme Court let the ruling stand, ushering in marriage equality in the state. Two years later, in Obergefell v. Hodges, the Supreme Court legalized same-sex marriage nationwide.)

The queer legal eye
The judges said that being LGBTQ lawyers and later judges gave them keen insight into how the law affects the community, especially when their partnerships and families were excluded from being protected under the law.

"While we couldn't get married and have the rights of marriage, at least we could help people get recognition for their children," said Emede about working with couples on family and relationship rights before the advent of same-sex marriage. "That was very important work."

However, she and her partner of 31 years, Marci Garcia, did not rush to San Francisco City Hall to get hitched during 2004's "Winter of Love." They waited, knowing the high chance the marriages would be invalidated. Emede also had to consider her future appointment to the court. Up to that moment, she was very involved in BAYMEC, but she had to not be as politically outspoken as a judge, she said.

"Judges are unable to take a stand on a political issue that might come before them," Emede said about having to remain silent publicly and patient privately.

Delgado and Diana, her partner of 24 years, took a different approach in 2004.

"We were so excited to be married just for the sake of being able to do it," she said, calling the monthlong frenzy "a big celebration of queerness up in San Francisco."

She said she will never forget the excitement and joy and "how much it meant to have a government official stand up for us in the way that Gavin Newsom did that day."

At the same time, the couple worried about the daily legal pitfalls that could affect their young family, Delgado said, referring to their adopting a son who is now 16.

"Every single day of life was plagued by this uncertainty that we had," she said. "We were really demoralized and nervous and scared."

Emede and Garcia got married in 2008 before the passage of Prop 8.

"I felt different in the world the day after the decision came down saying that we could get married," said Emede, stating for the first time she felt like she had the same rights as everyone else on the street she was walking on in downtown San Jose. "I know it's not for everybody, but for us, it mattered.

"Not everybody wants to get married and that's fine," she added. "The key is that we have the ability to do it."

Adams and his partner, whom he did not name, chose not to get married now that it is legal, he said, but that freedom to choose did change him.

"The day after that you could get married, you did feel different," he said.

Out on the bench
Delgado and Emede said they found power in being out during their careers. They are keenly aware of how being openly lesbian shaped their careers and their courtrooms.

During her career, Delgado found herself routinely assigned cases involving LGBTQ victims and Indigenous people. She also began to see small but significant changes — rainbow flags flying over government buildings and government officials standing up for LGBTQ rights — during the decades that allowed her to be bolder about authentically being herself as a lawyer and at court.

"There were little things that I think started to happen that, maybe, I felt made it more possible for me to be explicitly out," said Delgado, who describes herself as a Latinx femme with an "inner drag queen."

Delgado, who designated herself as the "junior judge," and the "senior queer" in the court said, "I'm pretty gay, gay, gay, queer, queer, queer everywhere I go."

Her biggest step coming out professionally was when she brought officials from the National Equity Project to the county's justice community to provide staff with LGBTQ and ethnic cultural sensitivity training.

"I trained law enforcement. I trained prosecutors. I trained defense attorneys," Delgado said. "That was probably, I think, the first time that I was really markedly out."

Emede had a similar experience during her career as a family attorney. Her law partners stood by her not taking clients if they had issues with her being openly lesbian. She was able to work on family and partnership cases strengthening same-sex couples' and family rights before marriage equality, she said.

Delgado said from day one in her courtroom, she announced her pronouns.

"I remember coming out and announcing my pronouns on the bench as part of my announcements along with, 'Wear your mask,'" she said.

Emede said she hadn't thought about stating her pronouns along with the other announcements she makes at the beginning of each session. "I think I'm going to [do that]," she said, looking at Delgado.

She explained her years of being closeted at Hewlett-Packard taught her how to use gender-neutral pronouns that she's carried with her to the bench. She added that people entering her courtroom can choose their preferred name and pronoun on a form outside her courtroom. People can hand the form to her deputy to give to her.

"What we want to do is be able to have people be addressed, however they want to be addressed when they come into our courtroom," Emede said. "I want all those humans in front of me to feel like they can say whatever it is they're there to say to me regardless of all of the things in their life."

Adams, on the other hand, has been more private about his sexuality throughout his career, he said, appearing to struggle with the issue as he spoke.

"It was never something I wanted to necessarily keep secret," he said about being out as a family law attorney and now as a judge in family court. "It was definitely something that I kept in the background just because I didn't want it to be an issue.

"I never wanted people to think that I was giving them advice that was something less than because I don't have my own children, or I wasn't a parent, or if I was a parent, [but] a different kind of parent," he said. "It did bother me a little bit."

Profiles of Emede, Delgado, Adams, and Schwarz are on the Queer Silicon Valley website, a project of the BAYMEC Foundation, Yeager said. Profiles about the other out judges will be posted soon.