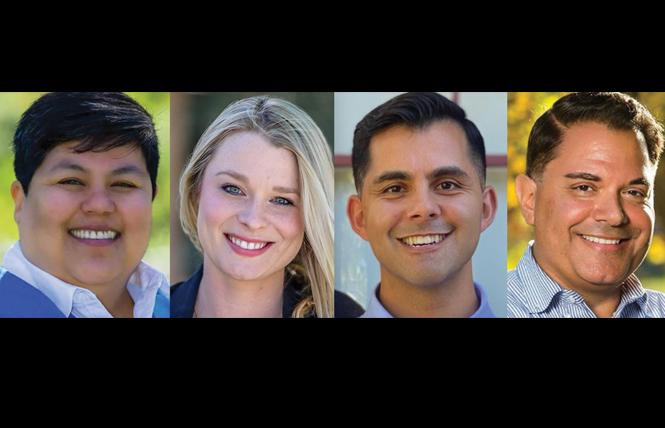 With at least 18 out candidates seeking California legislative seats in 2022, LGBTQ leaders are on the cusp of reaching their goal to have 10% of state lawmakers be from the community. In order to do so, the Legislative LGBTQ Caucus needs to grow from its current eight members to 12.

"I think there is a good chance of getting there," said gay state Senator John Laird (D-Santa Cruz), now in his second year of a four-year term.

All 80 Assembly seats are up for grabs as are the 20 even-numbered Senate seats. Ahead of Friday's filing deadline to appear on the June 7 primary ballot, no known transgender person had decided to mount a bid in one of the races.

Thus, it could be another two years before the first transgender legislator is elected in the Golden State. There is a good possibility of seeing the first queer person elected since the caucus added the Q to its name a few years back.

She endorsed Gómez to serve out the remainder of her term through December. With wide support from San Diego leaders, Gómez could conceivably win the seat outright next month if she gets more than 50% of the vote. Her main opponent is fellow former San Diego city councilmember David Alvarez.

Gómez also needs to run in June then on the November ballot for a full two-year term. Another queer candidate, Bulmaro "Boomer" Vicente, is running in the June primary for the 68th Assembly District seat covering his hometown of Santa Ana plus the cities of Anaheim and Orange.

He is challenging Assemblymember Tom Daly (D-Anaheim), a former Anaheim mayor and councilperson who currently represents the 69th Assembly District. (Due to redistricting its number was changed.)

Already backed by the California Democratic Party in the special election, Gómez secured its endorsement in the general election race over the weekend at the party's statewide convention. Daly also won the endorsement of the party.

There are three bisexual legislative candidates this year, with Assemblymember Alex Lee (D-San Jose) running for reelection in the newly drawn 24th Assembly District. It continues to straddle Alameda and Santa Clara counties like his current 25th Assembly District does.

Rounding out the trio is South San Francisco City Councilmember James Coleman, who is seeking the open 21st Assembly District seat on the Peninsula. Currently numbered AD 22, it is being vacated by Assemblymember Kevin Mullin (D-South San Francisco) due to his vying to succeed retiring Congressmember Jackie Speier (D-San Mateo/San Francisco).

A rising young progressive leader in the state, Coleman is in a tough campaign against San Mateo City Councilmember Diane Papan, whose late father, Lou, had held the seat in the 1970s and 1980s. Also in the race are fellow Democrats Giselle Hale, Redwood City's mayor, and county community college board member Maurice Goodman.

The state Dems endorsed Lee and Holstege but did not take a position in Coleman's race. In a news release issued Monday, Holstege thanked the party for its support and said she looks "forward to continuing to build our incredible grassroots coalition."

East Bay voters could elect their first out state legislator to the open 20th Assembly District seat. Gay nurse and union leader Jennifer Esteen, if elected, would also be the first out Black female to serve in the Legislature.

Also running is gay Dublin City Councilmember Shawn Kumagai, who would be the first LGBTQ legislator of Japanese descent in Sacramento. Also vying to succeed Assemblymember Bill Quirk (D-Hayward), who opted against seeking reelection, is labor leader Liz Ortega-Toro, who is straight. Quirk has endorsed her in the Alameda County contest.

Low and Smallwood-Cuevas were both endorsed by the state Dems. The party did not endorse in the AD 20 race.

Other races
Los Angeles County is assured of once again having LGBTQ representation in the state Senate due to the contest for the newly drawn 20th Senate District seat. Either lesbian social worker Caroline Menjivar or gay hotel manager Daniel Hertzberg is set to become the first out state legislator elected from the San Fernando Valley.

They are vying to succeed Hertzberg's father, state Senator Bob Hertzberg (D-Van Nuys), who is termed out this year from his 18th Senate District seat. The younger Hertzberg won the state Dems' endorsement over the weekend.

"It is incredibly humbling to have earned the support of the California Democratic Party," he stated in a Monday release. "The grassroots activists that supported me over the weekend are the foundation of the Democratic movement, and their support is a testament to the fact that we're running a policy focused campaign."

Expected to return leadership from Los Angeles to the Assembly is Rick Chavez Zbur, the gay former executive director of statewide LGBTQ advocacy organization Equality California. He is favored to win the open Assembly District 51 seat. It was newly drawn to run from Santa Monica east to Griffith Park and includes the LGBTQ enclave of West Hollywood.

Aiming to join him is gay veteran Joseph C. Rocha of Escondido. He is trying to oust state Senator Brian Jones (R-Santee) in the newly drawn 40th Senate District in San Diego County.

Rocha won the endorsement of the state Democratic Party, as did Zbur and Padilla. Also endorsed by the state party were Ward and Cervantes.

In a statement Rocha noted he "entered this race to fight for working families like mine and to make sure that all Californians have a path to the middle class and I'm grateful that the California Democratic Party endorsed my candidacy."

At least one gay Republican is on this year's ballot, Anthony Macias of San Jose. He is running in the new 25th Assembly District, where Assemblymember Ash Kalra (D-San Jose) is all but assured of winning reelection in the fall.

Campos faces headwinds
The other known out legislative candidate is gay California Democratic Party Vice Chair David Campos, who is in the April 19 runoff race for San Francisco's open 17th Assembly District seat. He is facing off against District 6 Supervisor Matt Haney, who was the top finisher in the February 15 special election.

They are running to succeed David Chiu, who in November resigned to become San Francisco's first Asian American city attorney. The state Dems are not taking a position in the race.

Campos, a former city supervisor and police commissioner, had lost to Chiu in 2014. And he is again facing headwinds in his bid to represent the LGBTQ neighborhoods of the Castro, Tenderloin, and South of Market.

Haney won his lawsuit last week to prevent Campos from calling himself a civil rights attorney on the ballot. Instead, he will be listed as a criminal justice administrator. Campos is currently on leave as chief of staff to embattled San Francisco District Attorney Chesa Boudin.

"I am confident that Matt will champion progress over stagnation and deliver on bold solutions to urgent challenges like our housing shortage and climate crisis," stated Mahmood.

The announcement followed a number of groups that had backed Mahmood switching their endorsements to Haney. Among those that have are several pro-housing groups plus a number of local Democratic clubs.

And after Haney refused to commit to a date for a candidate debate to be hosted by the Alice B. Toklas LGBTQ Democratic this month, the political group announced March 2 that it was scrapping the event. Alice did not endorse anyone on the February ballot, and it remains to be seen if it will revote on an endorsement in the runoff race.