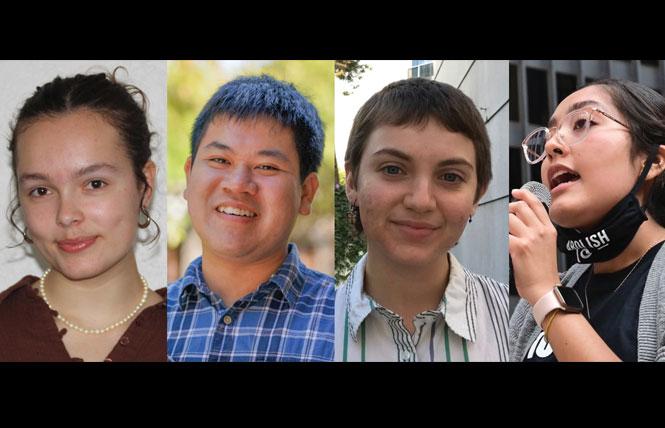 The $5,000 scholarships provide financial support for the academic aspirations of young activists working to advance health and social justice in their communities, according to a news release from the AIDS grove, which is located in San Francisco's Golden Gate Park.

The scholarship is named in the honor of Zamora, the late AIDS educator, activist, and reality television pioneer who died in 1994 from AIDS-related illness.

Two students are from UC Berkeley — Olivia Freidenreich and Peter Pham. Freidenreich is a first year student at Cal and is exploring the intersection between literature, art, and social justice in the College of Letters and Science, according to a news release. She's been a Planned Parenthood peer advocate and spoke to fellow high school students at state Senator Anthony Portantino's (D-Pasadena) annual HIV/AIDS summit.

She also worked as an intern for the law enforcement accountability unit at the Los Angeles County Public Defender's office tracking officer-involved shootings and in-custody deaths. Freudenreich plans to continue her work at the convergence of criminal justice, reproductive health, and art.

"As I bonded with fellow advocates and artists, I realized that my motivation to do this type of work was more than a hobby," she stated. "It is a fierce passion that I will take with me into the future."

Pham is a community college transfer student to Cal, where he studies public health and molecular environmental biology. His goal is to become a public health physician. His work has been rooted using community organizing and advocacy to address the discrimination and shame that LGBTQ+ and HIV-positive people face. He served as a COVID pediatric vaccine researcher for Pfizer.

"I hope to continue the fight against HIV/AIDS on the scientific front in addition to the legislative front," he stated.

Leo Parrott is a scholarship recipient who attends the University of San Francisco. They are a sophomore and enrolled in USF's nursing program. Parrott has worked in the health care field as a medical assistant providing services including sexually transmitted infection testing, PrEP management, and hormone replacement therapy. Outside of work, they have participated in peer support groups centering transgender and gender-nonconforming people at the Pacific Center for Human Growth in Berkeley and the Transgender District in San Francisco.

"As both a patient and a provider, my experiences within the health care system have affirmed the present need for LGBTQ+ competent care," they stated.

Jashui Zarate Torres is a freshman at Dominican University in San Rafael. She plans to become a psychiatrist focusing on research and advocacy for immigrant rights. She was an intern for the Southwest Suburban Immigrant Project and community health worker during the COVID-19 pandemic to help distribute quality resources and translation services for those in need.
"My involvement in activism comes from a place of passion ingrained within my heart and desire to see true liberation of all people," she stated.

The scholarships are provided through Gilead Sciences, Inc. and other partners, the AIDS grove stated. Since 2009 there has been more than $410,000 in scholarships awarded to 112 students.

High school seniors and college students can apply for the next Zamora scholarships here. The deadline is July 15.

In alignment with state guidance, indoor masking will no longer be required in City Hall and city facilities starting next Friday. Those include libraries, recreation centers, offices, and other service sites operated by the city, according to a news release from the city administrator's office. However, as the San Francisco Department of Public Health has indicated, it is strongly recommended that especially unvaccinated individuals continue to wear masks indoors.

Meanwhile, the San Francisco Superior Court announced that face coverings will remain mandatory in all courthouses.

"The health and safety of the public remains our top priority," stated Presiding Judge Samuel K. Feng. "We will continue to monitor health and safety guidelines, but at this point we will proceed with caution and continue our policy of requiring masks for everyone who comes into our courts."

The court will reschedule or postpone court dates, if necessary, to accommodate those who are ill due to COVID-19, the release stated.

SF launches 'Be the Jury' pilot program
San Francisco this week launched the "Be the Jury" pilot program in San Francisco Superior Court, which will compensate low-to-moderate-income jurors $100 a day for their jury service. The program was created with the goal of establishing juries that are more reflective of San Francisco's diverse communities, according to a joint news release from the public defender's office, district attorney's office, and the SF Financial Justice Project.

Prospective jurors will now receive information about the pilot program with their jury summons. Judges will also brief prospective jurors when they arrive for jury service, the release noted.
To learn more about the program, call 311 or go to the website (click on "jury reporting instructions").

Fluid to hold queer coffee confab
Fluid Cooperative Cafe, a trans-owned coffeehouse in the Tenderloin, will hold its Queer Coffee Conference March 25-27, at the shop at 332 Golden Gate Avenue in San Francisco.

The conference, which is free, will feature keynote remarks from coffee's biggest queer icons, according to an email announcement. A three-track workshop curriculum based on coffee, entrepreneurship and event management, and two "coffee throwdowns" curated in collaboration with Glitter Cat will also be offered.

In the announcement, organizers stated that "the conference was born after Fluid members noticed the lack of safe and inclusive coffee industry events for queer and trans individuals."
For more information and to sign up, click here.

The youth leaders will conduct a needs assessment, research guaranteed income programs, and develop a proposal that would help foster youth thrive.

Brown, who was appointed to the District 3 seat on the board following the death last year of former supervisor Wilma Chan, stated in an email announcement that he has long advocated for foster and transition age youth.

Interested people should complete a simple application by Tuesday, March 15.