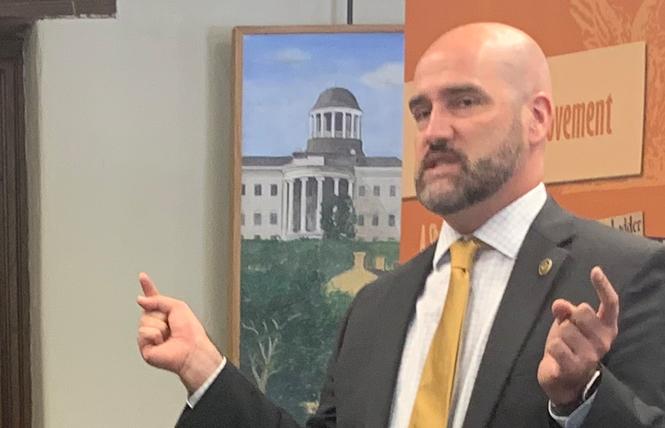 Missouri state Senator Greg Razer explains the history of the "Making History: Kansas City and the Rise of Gay Rights" exhibit to reporters after it was relocated to an annex across the street from the state Capitol. Photo: Courtesy Senator Razer's office

While often diminished and constantly overlooked, our LGBTQ history is rich with significant events, especially throughout the 20th century. The pickets of the 1950s in front of Independence Hall in Philadelphia; Marsha P. Johnson at Stonewall; anti-gay Anita Bryant drenched in orange juice; thousands marching the streets of San Francisco with candles; Pride flags flying outside the U.S. Supreme Court building for the Obergefell v. Hodges same-sex marriage decision. These events are often top-of-mind for those who know anything about our collective history.

One does not typically think of my home, Kansas City, Missouri, when discussing LGBTQ history. However, Kansas City played a significant role in the LGBTQ civil rights movement — one that should not be overlooked. Kansas City was host to the first national planning conference for homophile organizations in 1966. This conference was crucial for organizing the 15 separate organizations into a focused nationwide movement to fight against widespread discrimination. Our own organization founded in Kansas City, the Phoenix Society, was instrumental in printing material from their own printing press and distributing information from one group to the next, laying the groundwork for an organized national movement.

By the 1980s, like so many cities, Kansas City's LGBTQ citizens and our allies banded together to form AIDS service organizations, all of which still exist today. Kansas City elected Missouri's first openly LGBTQ member of our state legislature. We elected Missouri's first openly LGBTQ state senator. And today, I proudly represent my city in the Missouri Senate, as an openly gay man.

Thanks to history students at the University of Missouri-Kansas City, this part of our history will not be forgotten. Beginning in 2017, the award-winning history exhibit, "Making History: Kansas City and the Rise of Gay Rights," began traveling through the region with stops at libraries, community centers, and museums. The exhibit was not just an important narrative of LGBTQ history, it purposely highlighted ordinary people who accomplished extraordinary things through hard work and perseverance.

In late August of this year, the LGBTQ history exhibit arrived at the Missouri Capitol in Jefferson City, where it was scheduled to be on display for four months. However, shortly after the exhibit was installed in the Statehouse, several homophobic lawmakers complained the display was part of some far-left agenda and too controversial for the public to view. It's unclear if the lawmakers read any of the history exhibit or if the mere mention of LGBTQ history inside the Capitol triggered an overwhelming urge to cancel it.

Within hours of receiving complaints, Governor Mike Parson's (R) administration hastily caved to the bigots, pulling the exhibit from the Capitol building after only four short days on display. It goes without saying, there was nothing controversial about an exhibit that explained how members of the LGBTQ community fought to end persecution and demand rights as citizens. Today, the exhibit is housed in a small annex building typically used for storage across the street from the Capitol. Our history was put in the metaphorical closet.

I've been to New York City many times. I've given a speech at Stonewall, ordered a drink at Julius's, and sang along at Marie's Crisis Cafe. So much of our history is there. That history is amazing, it's tangible, and still feels recent. Yet there's something about San Francisco, something intangible that makes me think of it as our home — as our "somewhere over the rainbow." I suspect many of you know what I mean, because many of you probably came from places like Missouri. You were drawn to San Francisco because of its energy. It's a feeling of freedom, openness, and liberation. It drew you from places like Missouri, Mississippi, and Montana, where being openly gay can present daily challenges. In San Francisco, you can leave the baggage of your youth behind and start anew. A place where the battle was won.

However, we all know the fight continues.

Today, there are still too many young people who are grappling with the decision I felt I faced many years ago in my childhood home of 450 people: come out or commit suicide. Too many working aged adults still worry about losing their job if their employer finds out who they love. Too many of our seniors remain silent for fear of not finding a retirement community that will accept them. And too many conservative elected officials who, at best, turn a blind eye to these problems and, at worst, perpetuate the hatred toward our community.

This month we are celebrating LGBTQ history. We must celebrate our history because without those who fought before us, we wouldn't be who we are today. Without those who came before me, I would certainly not be a gay kid from Cooter, Missouri who is now the senator from Kansas City.

While our two cities are forever linked in the historical gay rights movement, we must never forget that tomorrow's history has yet to be written. We must never forget that there are those who still need our support. There are those who aren't in a position to fight for themselves; so, we must fight for them until they can stand alongside us. As the Phoenix Society proclaimed, "rising from the fiery hell of social injustice, the wings of freedom will never be stilled."

Missouri state Senator Greg Razer (D) is a gay man who was first elected to the state Senate in 2020. He previously served in the Missouri House of Representatives. For more on the removal of the exhibit from the Capitol, click here.