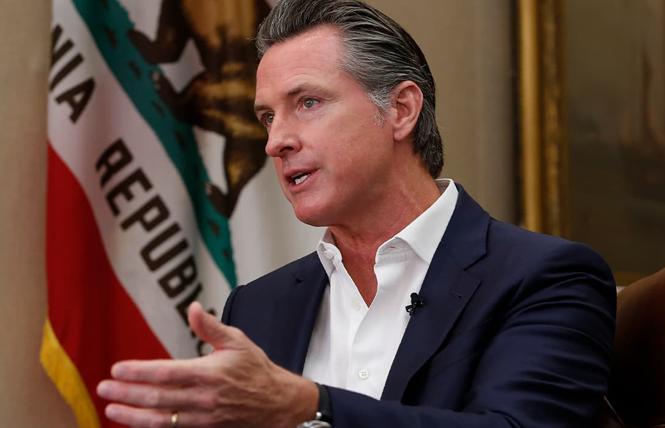 Overall, it was a good legislative year for LGBTQs in California. Governor Gavin Newsom finished taking action on hundreds of bills over the weekend. With one exception, which we'll get to, queers in the Golden State continue to enjoy robust protections and policies that will help them and their families. Among the legislation signed was Assembly Bill 1084 by gay Assemblyman Evan Low (D-Campbell). It will require big stores to have gender-neutral aisles for toys. Now, as some stores have already started doing, retailers will move away from gender-based signs so that kids can explore all play items. It's a good first step. Low and his co-author, Assemblywoman Cristina Garcia (D-Bell Gardens) agreed not to include children's clothing sections in their bill. That will be for another day.

Newsom also signed AB 218, which allows Californians to update their marriage certificates and their children's birth certificates to accurately reflect their legal name and gender in a manner that protects their privacy. A similar bill was vetoed last year because of concerns it would inadvertently out transgender and nonbinary people.

Another big bill will see public colleges and universities stop deadnaming trans and nonbinary students on their diplomas and academic records. Outgoing Assemblyman David Chiu (D-San Francisco), who will soon be San Francisco's new city attorney, was the author. It requires colleges and universities to use students' lived names, even if they haven't legally changed them. This is a big deal for students, who are often dismayed when they graduate with a diploma containing a name with which they no longer identify.

Newsom earlier this summer signed other legislation that will help the community. As we reported, AB 439 by Assemblywoman Rebecca Bauer-Kahan (D-Orinda) allows for deceased Californians who are nonbinary to be identified as such on their death certificates. The governor also signed into law two bills, one by Bauer-Kahan and another by gay state Senator John Laird (D-Santa Cruz), that replaces "archaic gender-specific pronouns" used to refer to the state's various elected leaders and appointed officials in state codes with gender neutral terms. Currently, most parts of the state code use "he" or "him" pronouns.

The one major disappointment was Newsom's veto of Senate Bill 110, the Recovery Incentives Act, which would have provided small financial rewards for people who return negative drug samples. Gay state Senator Scott Wiener (D-San Francisco) authored the bill, and writes more about it in a Guest Opinion piece in this issue. Suffice it to say, the bill was primarily aimed at helping people addicted to crystal meth, which is tough to kick. And there aren't medical interventions like those to treat people addicted to opioids. Newsom wrote in a veto message that the state is readying a pilot program, but Wiener's right — help is needed now. That Wiener, a liberal from San Francisco, was able to gather bipartisan support for the bill speaks to how substance use is a problem throughout the state, in rural and urban areas alike. Newsom's action also reminds us of the legislators who punted on Wiener's bill for safe consumption site pilot programs in San Francisco, Oakland, and Los Angeles earlier this year. Drug use is a crisis, leading to overdose deaths and other problems. We need creative ideas to help people because there is not one solution that can address the complexities of addiction and politicians need to realize that.

There will be a delay in another law, as Newsom didn't sign it this time but is expected to in January. Senate Bill 357, the Safer Streets for All Act, co-authored by Wiener and Assemblyman Ash Kalra (D-San Jose), would repeal California Penal Code Section 653.22, the law that criminalizes loitering for the intent to engage in sex work. It also allows those convicted of loitering with the intent to commit prostitution, particularly the Black women and transgender individuals often targeted under the law, to seal their records.

Wiener told us the bill will go to Newsom in January and it does not need any more votes in the Legislature. We gather that the governor needs more time and that Wiener will be discussing the importance of this bill with his staff. So count this one delayed but not held, like the safe consumption site legislation, which will need votes next year.

Newsom helps the press
Newsom deserves praise for signing Senate Bill 98. As we wrote last week, the bill, authored by state Senator Mike McGuire (D-Healdsburg) and co-authored by Wiener, among others, clarifies the rights of journalists at protest scenes. According to a summary of the bill, it would prohibit officers from assaulting, interfering with, or obstructing a journalist from covering a protest or demonstration. It also allows a journalist who has been detained to speak to the supervisory officer to immediately challenge their detention. There have been far too many instances in which law enforcement officers have injured or sought to prevent journalists from covering protests. That hurts democracy. Police officers probably won't be thrilled with Newsom's action, but if they conducted themselves in a lawful manner we wouldn't need SB 98. There is no reason journalists need to be detained or otherwise mistreated at protest sites, and now we have a law to bolster our right to access. SB 98 is yet another safeguard against police misconduct and we're grateful that Newsom agreed and signed the bill.