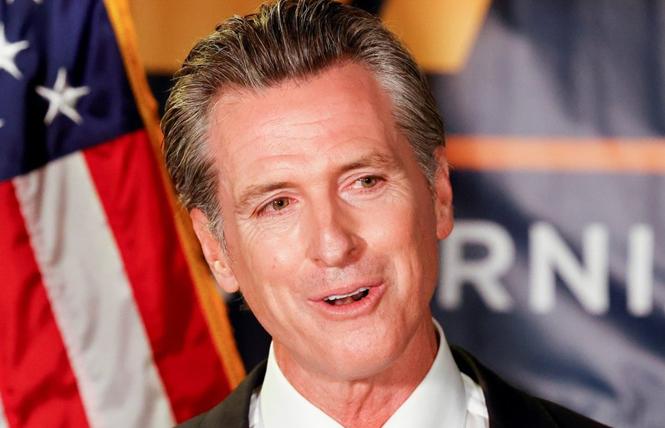 Of the many pieces of legislation awaiting action by Governor Gavin Newsom, Senate Bill 98 should be signed without hesitation. Authored by state Senator Mike McGuire (D-Healdsburg) and co-authored by gay state Senator Scott Wiener (D-San Francisco), among others, the bill clarifies the rights of journalists at protest scenes. That we even need to have legislation addressing this issue speaks to how law enforcement agencies around the state have run roughshod over reporters, photographers, and other news gatherers covering protests, often violating their rights in the process. According to a summary of the bill, it would prohibit officers from assaulting, interfering with, or obstructing a journalist from covering a protest or demonstration. It also allows a journalist who has been detained to speak to the supervisory officer to immediately challenge their detention. A letter supporting SB 98 was sent by a coalition of media and free speech organizations, including the California News Publishers Association, the American Civil Liberties Union, the First Amendment Coalition, the California Broadcasters Association, La Opinión, California Black Media, and Ethnic Media Services. (The Bay Area Reporter is a member of CNPA.)

In their letter, the organizations cited several examples of inappropriate behavior by law enforcement officers toward journalists at demonstrations: Barbara Davidson, a Pulitzer Prize-winning photojournalist, was covering a protest in Los Angeles when a police officer told her to move. After she showed him her credentials, he responded that he did not care. She again identified herself as press, and, as she began to walk away, the officer shoved her, causing her to trip and hit her head on a fire hydrant. San Diego Union-Tribune reporter Andrew Dyer was shot with pepper bullets while he was documenting protests in La Mesa, California on May 31, 2020. Closer to home, the letter also includes incidents reported by Bay Area news organizations: Katie Nielsen, a reporter with KPIX 5 News, was detained by officers in Oakland while reportedly identifying herself as press with visible credentials. The detention was brief but it interrupted her reporting on a peaceful protest by Oakland Tech High School students. And Leonardo Castañeda, a reporter with the San Jose Mercury News, was zip-tied and detained by San Francisco police officers.

Those are just a few of the reported incidents. "In California and across the country, police have arrested, detained, and have physically assaulted journalists with rubber bullets, pepper spray, tear gas, batons, and fists," the letter states. "In many cases there are strong indications that the officers injuring journalists knew their targets were members of the press."

That's not surprising. Police have a vested self-interest in preventing journalists from reporting on their actions during protests. We've all seen the images of officers using excessive force on protesters, bystanders, and members of the media. Here in San Francisco, the issue becomes even murkier because it's the police department that issues press passes, which are supposed to allow the media into areas normally inaccessible to the general public. In theory — and in practice — SFPD has even used that power to keep reporters out of meetings. As we wrote in this space in 2017, a reporter for 48 Hills was kicked out of a police news conference because she did not have a press pass. We've long called on the police department to revamp its outdated policy, and have serious concerns about whether SFPD should even be in control of press passes in the first place due to potential abuse and conflicts of interest.

Newsom should sign AB 98 because it's one more safeguard against police misconduct, in this case, against working members of the press. Members of the public should support this bill because it's only by journalists actively covering protests and demonstrations that they can see for themselves the actions of law enforcement.