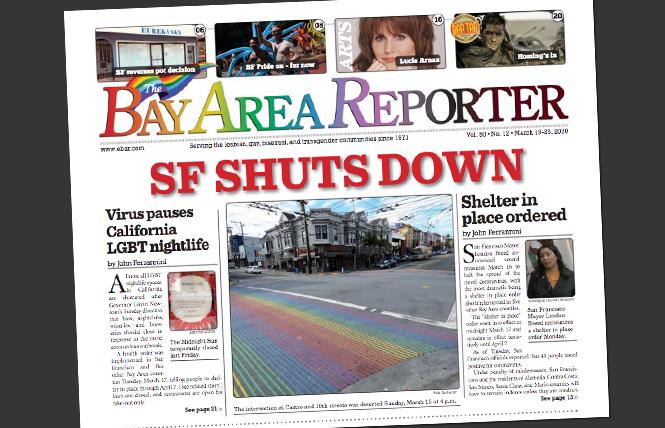 The Bay Area Reporter's cover from March 19, 2020, after a lockdown was ordered due to the COVID-19 pandemic. Photo: Courtesy B.A.R.

The paper's cover for March 19, 2020 — its first issue after the COVID-19 lockdown went into effect, was cited. The headline read "SF SHUTS DOWN" and featured a photo of the empty intersection at Castro and 18th streets. Publisher Michael Yamashita, news editor Cynthia Laird, arts and nightlife editor Jim Provenzano, and assistant editors Matthew S. Bajko and John Ferrannini were cited.

"I'm immensely proud of the B.A.R. team and gratified by the San Francisco Press Club's recognition of our work," Yamashita stated.

In the newspapers non-daily news story category, Bajko received second place for his article detailing how a trove of naval records he obtained showed that a document housed at the San Francisco Public Library claiming slain gay San Francisco supervisor Harvey Milk had received an honorable discharge from the Navy was faked (February 12, 2020 ).

The disclosure led author and historian Lillian Faderman to tell the B.A.R. that she would update her 2018 biography "Harvey Milk: His Lives and Death" to say that he had been given an "other than honorable" discharge. She had cited the library's document for the book.

Yamashita praised the recognition for the story and for Bajko's weekly political columns, which he has penned since September of 2006. In the 1970s Milk had written the B.A.R.'s first political column in the paper.

"The club's awards for Matthew Bajko are well deserved for his superb reporting on LGBTQ issues and politics in California," he stated.

The awards, announced October 1 in an online program, highlighted a year of recognition for the B.A.R., which started publishing April 1, 1971 and has become the leading LGBTQ newspaper in the state, and is the oldest continuously publishing queer paper in the country.

In May, the National Center for Lesbian Rights honored the paper for its work over the past half-century and, in September, statewide LGBTQ rights organization Equality California also recognized the B.A.R.