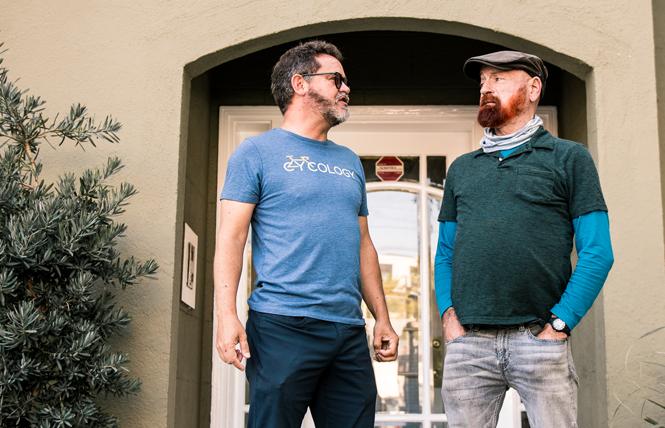 Castro residents Tito Vandermeyden, left, and his ex-partner, Demian Quesnel, stand in front of the 225 Sanchez Street apartment they once shared. Both were evicted in 2004. Photo: Christopher Robledo

The following year they attempted to land a below-market-rate apartment via the Mayor's Office of Housing and Community Development's affordable housing program but weren't selected. After they split up in 2009, Vandermeyden began trying to buy an affordable unit on his own.

Over the past 12 years he has applied for at least 15 one-bedroom below-market-rate housing units in the city but has had no luck via the lottery system used to select the applicants who will become homeowners. The process has been "very discouraging," Vandermeyden, 60, told the Bay Area Reporter.

"At one point I just gave up because I thought it was never going to happen," said Vandermeyden, who moved to San Francisco in 1995 from Amsterdam and has called the Castro home ever since. "I have never won. I have enough money saved up so that has been really horrible to me."

Quesnel, 70, told the B.A.R. he is now considering applying for one of the BMR units reserved for senior housing in the city. He first moved to San Francisco in 1970 and six years later had landed the Sanchez Street apartment he would later share with Vandermeyden.

"At one point the property owners tried to sell it to us. I couldn't get enough down payment money to put down," recalled Quesnel, a long-term AIDS survivor who was on disability. "They sold it to a friend of their son's, and he came in assuring us he bought it for his retirement and we would be there for a long time. We proceeded to put money into the place to fix it up and do stuff. We thought we'd be there for the long haul."

Yet, within three years, they were given an Ellis Act eviction notice, meaning the owner intended to remove the unit from the rental property market.

"We were pretty pissed off. We felt pretty betrayed," said Quesnel, who due to living with HIV was given a year to move out and received roughly $30,000 in a buyout payment.

Frustration with preferences
Today, their frustrations lie with the special preferences the city grants to certain people entering the lotteries held for the affordable housing units. When it comes to selecting people for BMR units, first preference is given to people who have a Certificate of Preference from San Francisco's former Redevelopment Agency.

Those residents found themselves displaced by government action in the 1960s, 1970s, and some in the 1980s, largely because of city-sponsored redevelopment. Just this week Governor Gavin Newsom signed legislation authored by Assemblyman David Chiu (D-San Francisco) that expands the preference as of January 1 to cover the children, grandchildren, or other lineal descendants of those displaced by redevelopment.

"As residents displaced by redevelopment have gotten older, it makes sense to extend this program to their children and grandchildren so a new generation has the opportunity to afford to live in San Francisco," stated Chiu.

Second highest preference is given to people who have a Displaced Tenant Housing Preference certificate from the mayor's housing office. It applies to applicants who were displaced either by an owner move-in or Ellis Act eviction since 2010.

Historically LGBTQ neighborhoods like the Castro and Tenderloin saw significantly higher evictions in that time span. And, as the ordinance pointed out, the Castro saw rents rise 145% over those years compared to the citywide average of 54%.

"The Board of Supervisors set the Ellis Eviction Eligibility at 2010 as that was the year when Ellis Evictions began to see a sharp increase in many lower income/middle income neighborhoods," explained Barnes.

Vandermeyden and Quesnel contend the preference should apply to tenants like themselves who were evicted prior to 2010. Capping the eligibility for that certificate to that year and beyond disadvantages longtime residents of the city like themselves, the men argue.

"I think it is totally unfair a person who got evicted after 2010 gets priority over me, who got evicted in 2004," said Vandermeyden, who used his skills as a data engineer to map Ellis Act evictions in the city, particularly those impacting Castro residents living with HIV and AIDS, in the early 2000s. "They should give people who are evicted before 2010 the same rights; that would solve everything for me."

Quesnel said it doesn't make sense to him why someone displaced by urban renewal in the 1960s and 1970s gets special treatment but not someone like himself who has lived in the city for five decades but now fears they will be priced out of San Francisco in their old age. He questions why someone who has moved to the city since 2010 and is evicted gets a higher preference in the housing lottery than a decades-long resident like himself.

"This preference increases the odds to find adequate housing to grow old in and live in in San Francisco," said Quesnel. "I am sure I am not the only person who has been Ellis Acted and is now looking at senior housing."

For Quesnel the issue is particularly personal, as at the time when he was best positioned to buy his first home he didn't because he was struggling with a disease that he expected would kill him long before he saw his retirement years. Having survived the AIDS epidemic, he isn't interested in moving to Palm Springs like other gay retirees have done.

"I don't know how many other people there are in my situation, but a lot of people who survived the AIDS epidemic are now in a situation where they are looking at senior housing and permanent long-term senior housing to stay in the city," said Quesnel, who continues to rent an apartment in the Castro. "Because my experience with AIDS happened in the time of my life when I might have been in a position to buy a house, I didn't buy a house because I thought I was dying soon. I don't have a house to sell to move to Palm Springs; plus I have zero desire to live in Palm Springs."

Want to remain in SF
Vandermeyden also doesn't want to leave the city in order to buy a home.

"For people like me, who really want to buy here and see San Francisco as a home, the only way we can do that is through the BMR program. It is why I think this rule should change," said Vandermeyden.

They have raised their complaint about the lottery preferences to gay District 8 Supervisor Rafael Mandelman, who represents the Castro, and his staff. In an interview with the B.A.R. Mandelman was noncommittal about opening up the Displaced Tenant Housing Preference to people evicted prior to 2010.

"Now, we could just say anyone who has been Ellis Acted will have a preference, but that brings a whole lot more people into the category. The larger you grow that group, the less likely any of those preferences has any particular meaning," he said. "It does make sense if you were Ellis Acted in the last few years and may still have an immediate housing need. It's not sure to me someone Ellis Acted 20 years ago should automatically jump ahead of the line."

Even if the 2010 starting point were to be removed, that lottery preference is also limited to within six years of when the Ellis Act eviction was initially filed with the Rent Board. Thus, because their eviction occurred 17 years ago, Vandermeyden and Quesnel would still not qualify for a Displaced Tenant Housing Preference certificate, according to Mandelman's office.

What the two men have experienced "is a case study," said Mandelman, for why he has fought to see more affordable housing be built in his district. He was a vocal proponent for the passage in 2019 of Proposition A, a local ballot measure that directed $600 million for affordable housing to supervisorial districts like his that have seen high numbers of evictions but few new BMR units be built.

It also included $150 million specifically for senior housing, with LGBTQ-welcoming developments getting priority. As the B.A.R. has previously reported, it helped the city purchase a $12 million triangular lot on upper Market Street that is being redeveloped into as much as 130 housing units for seniors, with a majority expected to be LGBTQ people.

In District 8 "we don't have nowhere near enough BMR units," said Mandelman, who issued a report this summer about the need for more housing of all kinds to be built in the Castro and other neighborhoods he represents.

Several years ago the city created a housing preference for BMR units in a newly built building with more than five units so that people who live in the supervisorial district where it is located or within half a mile of the property would receive the third highest preference in the lottery for them. The fourth preference for all lotteries is given to people who live or work in the city.

But Vandermeyden and Quesnel told the B.A.R. those preferences do them little good if there aren't that many BMR units being built in District 8 or near the Castro where they would like to remain living.

"It feels to me he has no interest in helping," Vandermeyden said of Mandelman's response to their entreaties.