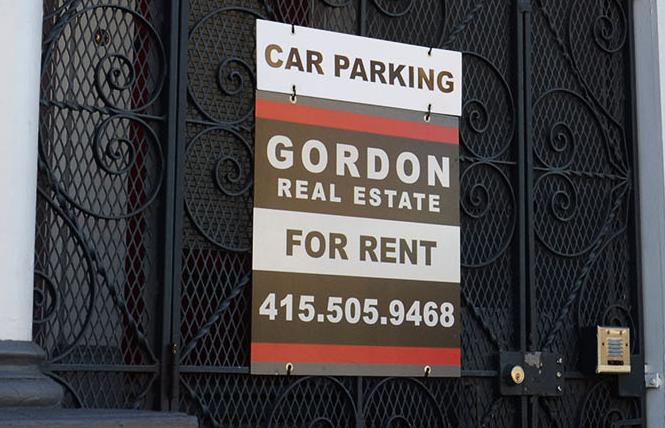 Tenant groups are preparing for what they describe could be an "eviction cliff" when the state's moratorium ends September 30. Photo: Rick Gerharter

Elected officials and tenants advocates are sounding the alarm about the impending end of COVID-19 eviction protections in the Bay Area.

Twenty-eight Bay Area legal, housing, tenant, and other community groups published "Eight Essential Actions For The Bay Area: Preparing for the COVID-19 Eviction and Foreclosure Cliff," listing what community members at all levels can do to prepare for September 30, when the moratorium ends.

"We need a plan and we have recommendations for what cities and counties can do to protect their residents when eviction protections expire on September 30," said Lupe Arreola, the executive director of Tenants Together, during a recent press briefing.

Under AB 832, tenants must provide landlords a signed declaration in response to a 15-day notice to pay rent, and pay at least 25% of the rent owed between September 2020 and September 2021 no later than September 30. This can be paid by monthly increments or in one lump sum.

However, it'd be a mistake to assume the unpaid rent is forgiven: landlords can take tenants to small claims court starting November 1 for any unpaid rent.

The San Francisco Chronicle recently reported that the state law upends the city's eviction moratorium ending December 31 for tenants that have paid a quarter of their rent. That was unanimously approved by the Board of Supervisors in June. The state's law supersedes the local one, the paper reported.

District 5 Supervisor Dean Preston, a longtime tenants rights advocate who represents the Western Addition, Haight Ashbury, and surrounding neighborhoods on the board, said during a Board of Supervisors meeting that his office tried to create a legal workaround to the state law but was unsuccessful in doing so. His office did not respond to a request for comment.

Across the Bay Bridge in Alameda County, the moratorium lasts as long as local emergency orders remain in place, according to the ordinance passed by the Board of Supervisors. Because of the indefinite nature of the moratorium, it may not be preempted by the state law that affected San Francisco County's moratorium. Bay Area Legal Aid and East Bay Community Law Center, which assist tenants in Alameda County, did not respond to requests for comment.

In San Francisco, Bill Hirsh, a gay man who is the executive director of the AIDS Legal Referral Panel, told the B.A.R. that "I don't think we've seen a dramatic jump just yet" in requests for services.

Nonetheless, "we are concerned, as all legal service providers are, that the civil legal system is about to be overwhelmed" with eviction cases.

National measure struck down
President Joe Biden's federal eviction moratorium was struck down by the United States Supreme Court in August in a 6-3 decision, which stated the executive branch didn't have the constitutional authority to halt evictions unilaterally.

"It strains credulity to believe that ... the CDC [has] the sweeping authority that it asserts," the unsigned opinion states, referring to the Centers for Disease Control and Prevention. "If a federally imposed eviction moratorium is to continue, Congress must specifically authorize it."

"Things are not going to end on September 30. In fact, they could get a lot worse," said Assemblyman David Chiu (D-San Francisco), who was on the press briefing.

"I want to communicate how important it is for local governments to do everything they can do to prevent evictions and stabilize renters who have fallen behind on payments," Chiu said, adding that tenants in the crosshairs still have hope.

Chiu said that AB 832 does provide some assistance through March.

"While we are all rightfully focused on the fact that the state's main eviction protections end on September 30, AB 832 does provide protections that extend for an additional six months," Chiu said. "If you apply for funding before it runs out, that could be a shield to pause eviction proceedings. That's a very important thing for folks to know. What you need to know is you'd need to find an attorney immediately, understand your rights, and exercise them."

"The California Legislature should extend the statewide moratorium, allow cities and counties to pass the strongest possible local eviction moratoria, and permanently require landlords to give tenants 15 days to pay their rent rather than a mere three days," the document states. "The California Judicial Council should deprioritize the resumption of eviction and rent collection cases to the extent legally possible and mandate consistency in court forms and the administration of state law."

"If you're behind in your rent or mortgage payment due to the pandemic, apply now and don't wait. There is still money available," Ferrand said. "In San Jose we're reaching out to residents using radio, email, social media, pop-up events and we've opened up an eviction protection support center."