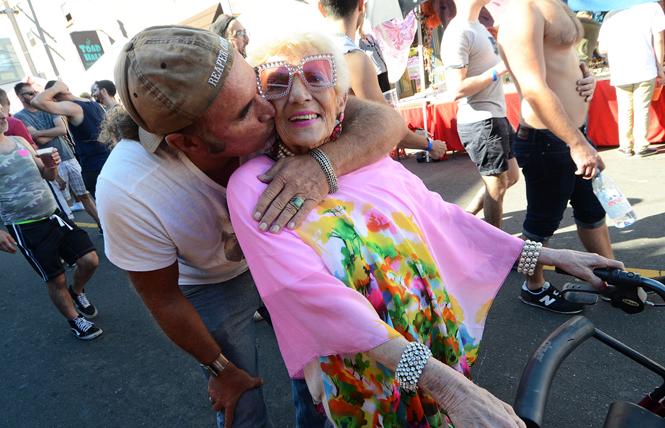 Jim Koran gave his 86-year-old mother, Christina Fast, visiting from Scottsdale, Arizona, a hug and a kiss as they made their way through the crowd at the 2018 Castro Street Fair. Photo: Rick Gerharter

After a hiatus due to the COVID-19 pandemic, the Castro Street Fair is set to return Sunday, October 3, in San Francisco's internationally-known LGBTQ mecca.

The fair will run from 11 a.m. to 6 p.m., according to Jenn Meyer, a straight ally who is the president of the fair's board of directors and owner of Local Take, a boutique shop on 17th Street. A donation of $5-$10 is requested, organizers said.

"We are just glad to have the opportunity to welcome our friends and neighbors back into the streets with us," Meyer stated to the Bay Area Reporter September 27. "It has been a hard year and we could all use some celebration."

Meyer and Fred Lopez, a gay man who is the vice president of the fair's board of directors, declined a phone interview with the B.A.R., opting instead to answer questions via email. During a Zoom meeting with the Castro Merchants Association earlier this month, Lopez said that "a small but mighty group of volunteers" were doing their best to help make the fair happen.

However, the fair will not have alcohol beverage booths as Lopez initially reported. Nor does it seem it will extend along 18th Street from Castro to Noe streets, or on Castro Street to 19th Street.

The footprint will thus be slightly different from past fairs. Meyer stated it will cover the area between Noe and Market streets on the north end, to 18th and Castro streets on the south end.

"In order to best support the merchants of the Castro, the fair will not be selling alcoholic beverages this year," Meyer said. "We encourage all of our attendees to patronize the restaurants and bars in the neighborhood."

Megahood2021, which replaced the Folsom Street Fair last weekend in the South of Market neighborhood, also did not have beverage booths.

"Dance Alley, which is usually in the parking lot behind Walgreens [at Castro and 18th streets], will be front and center this year — in the intersection of Market and Castro [streets]," Meyer stated. "We are happy to welcome back our friends with Cheer SF, as well. We are also encouraging the businesses with parklets (or just sidewalk space) to create entertainment in front of their businesses and we will be promoting on our social media."

Lopez had previously stated that "we are not doing a number of stages like in the past, taking cue from what the folks over at Folsom Street [Events] are doing," though Megahood2021 had five stages.

"We have T-shirts and hoodies available online and will be selling branded face masks at the fair," Meyer stated. "Our fair map will be online this year with QR codes to scan at the gates. Our website is also the place to find out more about the beneficiary organizations for 2021, as the fair is a fundraiser for these groups."

The beneficiary organizations were not listed on the website as of press time Wednesday morning.

The fair booklet is not yet on the website, which states that "more info about our amazing talent" will soon be announced.

"As with every year, we aim to raise funds for our beneficiary organizations as well as cover production costs of putting on the fair. Donations are always welcome at our website," Meyer continued.

There'd been a hiccup in that the Castro fair had "no sponsors" as of the September 2 Castro Merchants meeting, Lopez had told the business leaders.

"We're open to low-level sponsorships from merchants such as yourselves," Lopez told the group.

Meyer stated that since then "we have secured a number of partnerships, most notably with the Castro LGBTQ Cultural District, [which] is partnering with the fair to present the COVID-19 testing and vaccination area, on Market near Noe [street]."

As the B.A.R. first reported online last week, the Castro LGBTQ Cultural District recently reopened its Saturday vaccination clinic in the parking lot at 18th and Collingwood streets, nestled by Toad Hall and Walgreens. There will be no clinic on Saturday, October 2, however, since it will be offered at the street fair the following day.

"We will be stationed near the Noe Street entrance," Stephen Torres, secretary of the cultural district's board, stated. The district will be providing "both testing and vaccinations."

Tina Aguirre, a genderqueer person who is the manager of the Castro LGBTQ Cultural District, stated to the B.A.R. that "we are providing a $5,000 paid sponsorship to the Castro Street Fair because it's an important cultural event for LGBTQ people and we want to ensure its sustainability."

The late supervisor Harvey Milk, a gay man who owned a camera shop on Castro Street, organized the first Castro Street Fair to drum up some excitement in the business district catering to the city's Eureka Valley area. In 1977 Milk later went on to become the first out person elected to public office in San Francisco and California, only to be assassinated 11 months into his term in November 1978.