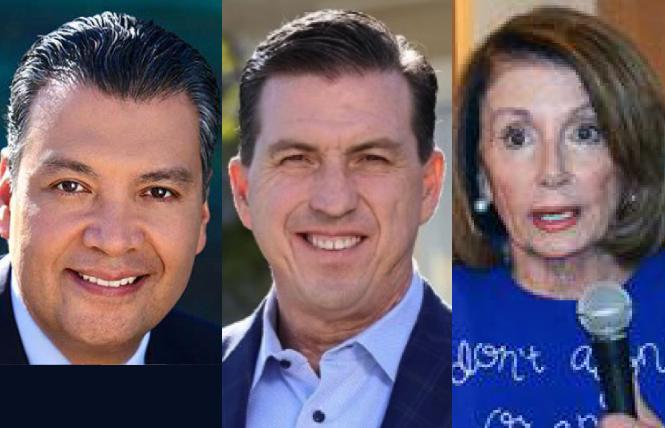 We are fortunate in the Bay Area to have a solid Democratic congressional delegation. That trend looks to continue even as the 15th Congressional District will select a new representative to succeed the retiring Jackie Speier, who ably represented parts of San Mateo County and San Francisco during her nearly 15 years in office. This primary election will also give voters the first opportunity to weigh in on California's new junior senator, Alex Padilla, the former secretary of state whom Governor Gavin Newsom appointed last year after Kamala Harris became vice president.

Below are our recommendations for Congress in the June 7 primary.

U.S. Senate: Alex Padilla
Alex Padilla is running for a full six-year term. He has been a strong ally to the LGBTQ community. In his Bay Area Reporter endorsement questionnaire, Padilla wrote that he is a strong supporter of the LGBTQ community. "I will continue fighting for a future in which the full civil and human rights of LGBTQ+ individuals are recognized," he stated. "The assaults on the LGBTQ+ community that we see happening across the country underscore the urgency of passing legislation at the federal level that protects the rights of all LGBTQ+ Americans. I pledge to champion federal legislation, like the Equality Act, that guarantees equal protection for all."

Padilla is a strong advocate for affordable housing and addressing the homelessness crisis that is gripping the state. He has proposed a Housing for All Act that would invest billions of dollars in programs that have proved able to tackle the affordable housing shortage, including the National Housing Trust Fund, and supportive housing for people with disabilities. "Many of the programs in the [Housing for All] bill were inspired by efforts that were pioneered right here in California," he wrote, "like creating a safe parking program to create parking sites that offer places for those who live out of their vehicles to park overnight." Funding would also go toward converting spaces like hotels, motels, and shopping malls into housing for homeless and vulnerable individuals, he noted.

Padilla stated that he was able to successfully push the Biden administration to extend the eviction moratorium last year, and said the government needs to reallocate federal rent relief funding to communities most in need.

Padilla is not widely known among Californians, which is why this election is important. One of his Democratic challengers is Santa Barbara tech billionaire Dan O'Dowd, who's running a vanity campaign to criticize the safety of self-driving cars. Additionally, the California Democratic Party messed up when it accidentally left Padilla's name off its list of endorsed candidates in the state voter guide; the party endorsed him back in March, as the San Francisco Chronicle reported.

15th Congressional District:
Kevin Mullin
This race, as mentioned above, is the only one in which the incumbent is not seeking reelection. The district includes parts of San Mateo County and San Francisco. Current Assemblymember Kevin Mullin (D-San Mateo) gets our nod because of his passion and commitment to ensure that our democracy works for everyone. During a Zoom editorial board meeting, Mullin was animated about the recent leaked U.S. Supreme Court draft opinion that would overturn Roe v. Wade, which has provided the right to abortion for 50 years. "The Roe news is an abomination," he said. "It undermines the will of the people." While careful to reiterate that it was a draft opinion that was leaked — the final opinion, expected in late June or early July could be different — Mullin nonetheless was emphatic that, if elected to Congress, he would work to protect other rights granted by the court, such as same-sex marriage, that could also be up for reversal. "A whole range of rights are under attack," Mullin said.

He said that there is a desperate need for a "strongly Democratic Senate" and for Democrats to retain control of the House of Representatives. The national outcry over the possible end of Roe could motivate Democratic and liberal-leaning independents to show up not only for the primaries, but the midterm elections in November.

Mullin, the Assembly speaker pro tem, has been a strong ally in the Legislature and has received a 100% score from Equality California from 2013 to 2020. He has also supported numerous LGBTQ-related bills authored by members of the Legislative LGBTQ Caucus and he authored an Assembly resolution in 2015 condemning the "Sodomite Suppression Act" ballot measure, which a judge declared unconstitutional so it did not face voters.

Mullin also discussed what he considers the biggest issue in his district, the affordability crisis, which includes affordable housing, climate change, and building an economy that works for everybody. Mullin is a progressive legislator who will ably fill Speier's shoes — she has endorsed him, and he worked for her years ago — and be a good addition to the Bay Area's congressional delegation.

We recommend Mullin for the 15th Congressional District.

Other congressional races
House Speaker Nancy Pelosi (D-San Francisco) is running for another term in the 11th Congressional District. Pelosi, who spearheaded the House floor vote on the Equality Act in 2021, is a pivotal ally to the LGBTQ community. That piece of legislation, introduced by gay Congressmember David Cicilline (D-Rhode Island) continues to languish in the Senate and likely will need to be reintroduced next year. Pelosi has done a remarkable job leading a sometimes-fractured Democratic caucus. She almost certainly will be reelected. 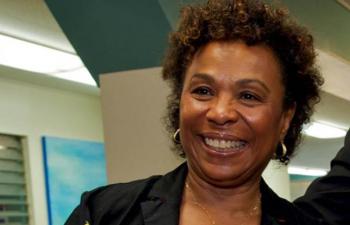 Over in the East Bay, Congressmember Barbara Lee (D-Oakland) is also likely to be reelected. A staunch ally, Lee, along with Pelosi, was instrumental in helping bring the AIDS Memorial Quilt back home to the Bay Area in 2019. Lee has been a longtime supporter of the HIV/AIDS community as well as the LGBTQ community. We happily support her reelection in the 12th Congressional District.

Eric Swalwell (D-Dublin) is running for another term. He is an ally to the community and is best known for taking on the Republicans, including former President Donald Trump. East Bay voters should return him to office in the 14th Congressional District.

In the South Bay, 17th Congressional District incumbent Ro Khanna (D-San Jose) is a progressive ally who in 2020 introduced the gender-neutral passport bill. (The U.S. State Department last month formally changed its policy to now allow such passports.) He will continue to advocate for climate change policies and Medicare for All.

Another South Bay Congressmember is Anna Eshoo (D-Palo Alto), who represents the 16th District. She has worked to protect the integrity of elections and expand voting rights access. She is a longtime ally.

Congressmember Zoe Lofgren (D-San Jose) rounds out the South Bay delegation and represents the 18th District. She is a strong defender of reproductive freedom and a steadfast ally.

In the East Bay, Congressmember John Garamendi (D) is running in the new 8th District after his old seat was divided up. He does not live in the district (members of Congress don't have to), and while it's a very diverse district, the power of incumbency makes it likely he will be elected. He has been a good ally to the LGBTQ community and said he would reach out to the community he now represents. This isn't the first time Garamendi has been affected by redistricting.

In the new 9th Congressional District, incumbent Josh Harder has worked to combat homelessness while in the House. This seat was previously represented by Jerry McNerney, who retired, and includes the East Bay cities of Tracy and Manteca in San Joaquin County.

In the 10th District in Contra Costa County, Mark Desaulnier is seeking reelection. He has been a strong ally over the years.

In the North Bay, we recommend reelection of Democratic incumbents Jared Huffman in the 2nd District and Mike Thompson in the 4th District. Both have served their constituents well over the years and are allies.