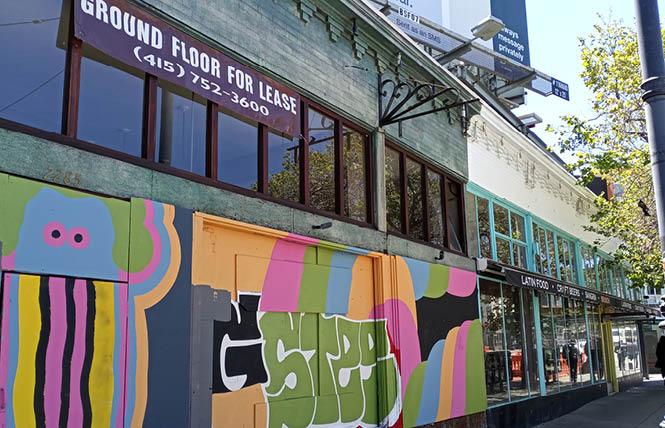 The Castro Merchants Association is working on a program to convert vacant storefronts, like the Harvest Market's former Castro location, into temporary pop-ups. Photo: Scott Wazlowski

Castro merchants, long frustrated by the presence of so many empty storefronts throughout the LGBTQ neighborhood but particularly on Castro Street itself, may find themselves with new neighbors, temporarily at least.

An ambitious plan announced at the May 5 meeting of the Castro Merchants Association would, with the cooperation of Castro/Upper Market Community Benefit District, neighborhood landlords, and grants from the Mayor's Office of Economic and Workforce Development, bring short term pop-ups to the district's long-empty storefronts.

"This is the number one problem in the Castro right now," CMA Co-President Dave Karraker told meeting attendees.

Empty storefronts have plagued the neighborhood for years now, as the Bay Area Reporter detailed more than four years ago. The rise of COVID, the homelessness crisis, and a street population severely affected by mental illness have only compounded the problem. At the end of April, the beleaguered neighborhood's commercial vacancy rate stood at 21.78% said Andrea Aiello, a lesbian who's the CBD executive director. Those figures don't include recently burned out businesses, storefronts that are vacant but under lease, or businesses outside the CBD footprint, which begins at Collingwood Street and, largely hugging Market Street, extends to Octavia Boulevard.

"The idea is exactly what you think," Karraker, a gay man, told the B.A.R. in a telephone interview. "To find landlords willing to put in pop-ups, like art, crafts, or entertainment in their vacant storefronts."

The pop-ups would only run for about six months, but Karraker hopes the presence of newly occupied shops will bring more people to the Castro, thereby bolstering already existing businesses, as well.

To accomplish the plan, CMA has applied for three grants from the mayor's economic office, totaling $250,000. Those funds, if approved, would be used for everything from paying for rent to sprucing the stores up, and for publicity and events to draw people to the newly filled shops. There would, however, be quite a bit of work to do beforehand.

Terry Beswick, a gay man who's executive director of the Golden Gate Business Association, the first LGBTQ chamber of commerce and a new member of the merchants group, is working alongside Karraker to get the plan going.

"I'm seeing it as a place for us to develop a pilot program," said Beswick, who formerly served in leadership roles at two of the neighborhoods' institutions, the Castro Country Club and the GLBT Historical Society, which operates a museum on 18th Street.

The funding the merchants group has applied for is not nearly enough resources for it to address all of the problems it's trying to tackle, Beswick said, but pop-ups themselves are a great way to test business models, giving new business owners a chance to better develop their ideas.

Many of the properties aren't necessarily ready to host such a venture, Karraker noted, and may need a lot of physical work. Finding the landlords willing to participate is another matter, too, but Karraker is optimistic.

"We're going to go after every storefront in the Castro and we'll find out who wants to work with us and who doesn't want to work with us," he said. Those who don't can expect a negative reaction from the community, he added.

The funds will also allow CMA to hire experts in real estate and economic recovery to organize the effort, Karraker said.

"One of the challenges we face is that none of us are experts in this," he said. " I run a gym. [CMA co-president Terrance Alan] runs a cannabis dispensary."

Back in 2014, the CBD commissioned a Castro retail strategy report. At that time the district had a retail vacancy rate five times higher than comparable neighborhoods, according to Danny Yadegar, a real estate agent who was a consultant on the report. Four years ago, gay District 8 Supervisor Rafael Mandelman convened a meeting to discuss commercial vacancies along the Church Street corridor when he was running for office.

In 2016, the CBD received a $25,000 grant from the mayor's economic office to begin implementing its retail strategy, as the B.A.R. previously reported. That funding was to focus on commercial vacancies near the intersection of Church and Market streets.

The division of labor for this latest project hasn't been agreed upon yet, Aiello said in a phone interview. Nonetheless, "I think it's a great idea," she added.

That said, Karraker knows when to ask for help. Filled storefronts are more likely to attract potential long-term renters, he said, and with the implementation of a business vacancy tax January 1 this year (it was approved by voters in 2020), and the reimposition of penalties for allowing graffiti to remain on buildings, there's plenty of motivation for landlords to try and refill empty shops. Unfortunately, the plan won't be in place in time for Pride Month in June, he said, but will be — hopefully — shortly afterward.

Karraker said he's also optimistic that these efforts will help turn out those people he calls "the caring class," those folks who are actively engaged in their neighborhoods, who have some expertise that they could bring to the table to the benefit of their community. Small businesses, he said, are "the lifeblood of the neighborhood" and they draw in the crowds to the district's restaurants, shops, and social hangouts.

"We know there's a wealth of expertise in the Castro, and if those people would step out, we'd be eternally grateful," Karraker said. "We need hands on the wheel."