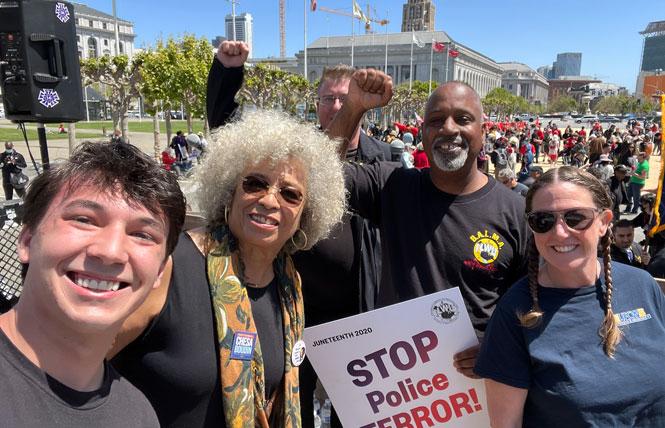 Thompson, 19, is one of three Democrats running for the open seat in addition to one Republican candidate. The leading contender who has racked up the broadest support among Democratic officials and liberal groups is former Santa Cruz County clerk Gail Pellerin, who retired in 2020.

It is expected that Pellerin will be one of the top two vote-getters next month and advance to the general election in November. She would be the first woman elected to represent Santa Cruz in the Legislature.

It remains to be seen if Thompson or fellow Democrat Rob Rennie, the mayor of Los Gatos, can grab the second spot. There is also the possibility of them splitting the rest of the Democratic vote enough to allow GOPer Liz Lawler, a Monte Sereno city councilmember, to survive the primary contest.

Having raised little money for their campaign so far and lacking the name recognition of their opponents, Thompson is banking on their work to unionize the staff at the Starbucks where they work as a shift supervisor to provide a bump of media attention and public awareness about their candidacy just as ballots begin to drop next week in voters' mailboxes. Wednesday, May 11, Thompson and their co-workers are expected to vote to form a union.

"When you look at the numbers and look at the map, because no one knows who these people are when it comes down to it, I have a better shot than Rob and Liz because of Starbucks," Thompson, who also identifies as gay, told the Bay Area Reporter in a recent phone interview.

The Assembly district, reconfigured due to the decennial redrawing of California's legislative seats, no longer includes Monterey or Prunedale. It runs from the Santa Cruz coastline and Big Basin State Park over the Santa Cruz Mountains into the Bay Area to cover Los Gatos, parts of southwestern San Jose, and Morgan Hill.

The district is taking the number of the Silicon Valley-based Assembly District currently represented by gay Assemblymember Evan Low (D-Campbell). He is moving to run for reelection this year in the new Assembly District 26 seat and has yet to endorse in the AD 28 race.

Pellerin gets backing
A number of South Bay and Central Coast LGBTQ leaders are backing Pellerin in the race, including gay state Senator John Laird (D-Santa Cruz) and Adam Spickler, a transgender man who serves on the Cabrillo College Board of Trustees in Santa Cruz. Wednesday the Bay Area Municipal Elections Committee, or BAYMEC, an LGBTQ political group that focuses on the South Bay and Central Coast, also endorsed Pellerin.

Many LGBTQ leaders have known Pellerin due to her nearly three decades serving as county clerk and having been a strong backer of marriage rights for same-sex couples.

"I have a 30-year relationship with Gail and have worked with her on voting rights issues. We were county employees together," said Laird, who also has a photo of himself and his husband with Pellerin after she signed their marriage license in 2008. "For 15 years she was out there on marriage equality as county clerk."

Spickler recounted how he and his husband, who is also trans, had a photo taken in Pellerin's office when she helped them re-register to vote with their updated genders on their forms. He had worked with her to put on workshops to walk trans and nonbinary individuals through the process to file for name and gender changes on their government-issued IDs and other forms.

Laird and Spickler both told the B.A.R. they were unaware that Thompson identified as nonbinary and didn't know them very well. Thompson doesn't talk about being nonbinary on their campaign website, but their bio does use gender-neutral pronouns.

Thompson also doesn't address LGBTQ rights on the issues page of their website. One needs to scroll all the way near the end of the page under the heading of "Reproductive Rights" to find a reference of Thompson being "a low-income LGBTQ+ person."

"I don't want to make it the forefront of my campaign," explained Thompson. "It is something I want to talk about."

Coincidentally, the day that the B.A.R. interviewed Thompson, their campaign had sent out an email to supporters with the subject line reading, "I'm a non-binary, plant lover, policy geek, Starbucks barista, and union organizer." Within it the environmental policy major wrote about the difficulty they had when they came out of the closet as gay during their freshman year of high school.

"Growing up in a household where my parents didn't immediately accept me for being gay, I learned early on the importance of taking a stand for my liberal beliefs no matter the cost," wrote Thompson, who came out as nonbinary after enrolling in college.

Thompson told the B.A.R. they understand why LGBTQ electeds like Laird and Spickler have endorsed Pellerin, since they are closely acquainted. They were less forgiving of Equality California, the statewide LGBTQ advocacy organization, for solely endorsing her in the race.

"They could have chosen to do no endorsement or a dual endorsement," said Thompson, who met with EQCA's political action committee. "Just deciding to endorse Gail, I wouldn't say it is a stab in the back, but it is not what LGBTQ organizations should be doing anytime when trans rights are persistently and relentlessly under attack."

Samuel Garrett-Pate, EQCA's managing director of external affairs, did not respond to the B.A.R.'s request for comment by deadline Wednesday. The organization often takes into account how much money a candidate has raised when assessing their viability.

"I was told funding is an issue," said Thompson, who hopes to parley the successful unionization drive next week into an appeal for campaign donations.

Pellerin returned the B.A.R.'s request for comment past the paper's press deadline Wednesday. She said she is "extremely proud and honored and humbled" to have received such broad support from LGBTQ leaders and pledged to be a strong advocate for LGBTQ rights in Sacramento.

"It is difficult times with everything happening right now. There's never been a time in our history where our rights are being challenged at the degree that they are," said Pellerin. "It is so important we work in solidarity and unity to combat the folks that are trying to limit our rights. Especially, when you look at the hate crimes happening to the LGBTQ community and legislation being proposed in other states, it is horrendous, and we need to take swift action."

Asked about being considered the frontrunner in the race, Pellerin told the B.A.R. she is not taking anything for granted.

"I am just trying to stay focused on my campaign and what we are doing," she said. "I am taking it one step at a time and keeping myself balanced."

Thompson grew up in the small city of Lincoln, north of Sacramento. Their parents divorced when they were in high school and decided it would be better for them to move to Argyle, Texas to live with their aunt and uncle.

Within five days of graduating Thompson drove to Colorado to visit their sister then headed to Santa Cruz for college. They got a job as a barista at Starbucks and soon were organizing efforts to unionize the staff at the coffee chain's locations across California.

"We have the votes; we know we will win," Thompson said of next week's election at their store.

The lack of support they have received from elected leaders for the union effort partly prompted Thompson to seek the Assembly seat.

"Only a handful of elected officials, I would say, are true labor allies. I definitely think that needs to change," said Thompson. "As someone who is nonbinary, gay, and young, we need someone who is going to shake up the political landscape."

When Assemblymember Mark Stone (D-Santa Cruz) decided not to seek reelection to the AD 28 seat, he gave a heads up to Pellerin, who was planning to run in 2024 when Stone would have termed out. His decision pushed back the filing deadline, leading Thompson to scramble to qualify for the race. Their mother and sister each gave $600 toward the $1,300 filing fee, with Thompson making up the rest.

"It was one of my most expensive purchases this year," Thompson noted.

If they can survive the primary then Thompson plans to particularly target voters aged 18 to 36 years old and low-income residents of the district in the general election. They also plan to roll out a vigorous get-out-the-vote effort over the summer while on college break.

Web Extra: For more queer political news, be sure to check http://www.ebar.com Monday mornings for Political Notes, the notebook's online companion. This week's column looked at the fundraising reports for a quartet of out West Coast congressional candidates.