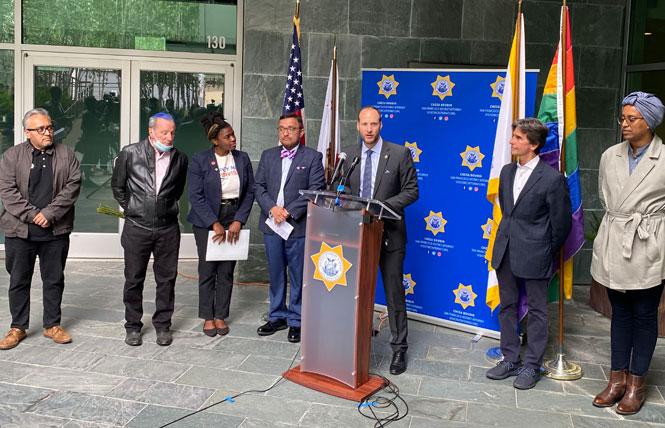 San Francisco voters will be asked June 7 to decide whether to recall District Attorney Chesa Boudin, who was narrowly elected in 2019 and took office in January 2020, just a couple of months before the COVID pandemic upended everything, including the criminal justice system. While we fully understand and empathize with residents and small business owners who are affected and angered by the perceived uptick in petty crime — smash-and-grab car break-ins, smashed storefront windows, and burglaries — it's unlikely that recalling Boudin will solve those problems. We recommend a no vote on the recall measure, Proposition H. San Francisco police data indicate that burglaries and larceny theft were down in 2021 compared to 2019 (the pandemic resulted in a decrease in 2020), but people, especially victims, don't see it that way. Throw in high-profile cases like the hit-and-run that killed two women on New Year's Eve 2020, by a man allegedly driving under the influence who has a lengthy criminal record and who was on parole after a plea deal that involved the DA's office, and the seeds of the recall were planted.

In an online editorial board meeting with the Bay Area Reporter April 1, Boudin made the case for himself. Despite the pandemic that closed courtrooms and despite having to run his office almost entirely via Zoom, Boudin said that he has adopted initiatives to help crime victims as well as defendants. These include a neighborhood liaison program. As we reported last fall, the District 8 liaison is Assistant District Attorney Samantha Adhikari, a straight ally who works to address concerns in the neighborhood that includes the Castro. Boudin announced a policy last June whereby prosecutors will be required to ask every defendant their preferred pronouns and if they use a different first name than the one listed in the charging document. The policy also has provisions to try to ensure correct pronoun and name usage for crime victims, survivors, and witnesses.

It's important to understand that the DA's office works in conjunction with the San Francisco Police Department. "We can't prosecute cases if the police don't bring them to us," Boudin said. "We can't prosecute people for being homeless, that's illegal and unconstitutional." To this end, we would like to see a better working relationship between SFPD and the DA's office. Yes, Boudin's office is prosecuting several police officers for various charges, which is hardly going to endear him to the powerful Police Officers Association, but such accountability is needed for a more just society. Every law enforcement agency has its so-called bad apples; smart, hard-working, law-abiding officers should welcome intervention by the DA's office when it's needed. And there are instances when that is so. Just recently, SFPD made arrests of two officers and a retired officer, the former two on suspicion of destroying evidence and the latter on suspicion of possessing a machine gun in a separate incident.

Prosecutions
According to the DA's 2021 annual report, the office filed over 4,500 new criminal cases last year. The DA's office filed cases in 57% of arrests presented by police in 2021, "the highest filing rate in 10 years the DA's office has been tracking this data," the report states. While the COVID pandemic resulted in fewer criminal courtrooms available, the DA's office brought over 50 cases to trial, including six homicide trials, four sexual assault trials, and eight domestic violence trials, according to the report.

Victim services
The recall proponents, Safer SF Without Boudin, have argued that Boudin falls short in victim services, however, that doesn't appear to be the case. Boudin said that he has expanded victim services and victim advocates, including a nearly 500% increase in the number of Chinese-speaking victim advocates, "and the creation, for the first time ever in San Francisco history, of two full-time advocates focused on supporting victims of property crime."

"Nothing is more important than expanding victim services," he said. He talked about the pilot program his office started in District 5 that reimburses business owners for smashed windows. Gay Supervisor Rafael Mandelman has talked about starting a similar program in his District 8.

Hate crimes
Boudin said his office has been "really proactive around the issue of hate crimes. We've prosecuted hate crime charges in anti-transgender attacks, and dedicated a full-time experienced prosecutor to handle hate crimes," he said. The DA's office has done training sessions with the SFPD to "expand their ability to gather evidence and document and investigate" possible hate crime cases. This is especially critical given the increase in reports of hate crimes by the Asian American and Pacific Islander community, which is due in large part to the manifestation of former President Donald Trump's racist statements on China when COVID erupted.

Diversion programs
One major issue in the recall is diversion programs. That's when a defendant is offered the opportunity to complete a program and if successful, their criminal charges can be reduced or dismissed. The recall proponents claim that Boudin no longer offers that "carrot-and-stick" approach, and said the diversion program now lacks accountability. Boudin told us that's not true. "The judges accept requests for diversion; the charges are still there," Boudin said, adding that if the defendant fails to comply with all the requirements of the program or gets arrested, the case is kicked back to criminal court. He said that diversion programs are successful and cited a California Policy Lab study that showed that those who successfully complete diversion are 20% less likely to reoffend. "If they don't complete the program they go to the traditional prosecution of the criminal complaint," he said.

Office management
Another criticism of Boudin is that his office has had high staff turnover. Let's just be clear — San Francisco DA's going back to Terence Hallinan, and probably before, have all come in and shaken the office up, including firing people, as Boudin did when he assumed office. "There's been high turnover well before I was DA," Boudin told us.

Beyond that, his critics say that many others have left, and one of them, former homicide prosecutor Brooke Jenkins, is now a chief spokesperson for the Safer SF campaign, which also says that Boudin has filled those vacancies with inexperienced assistant district attorneys. The downside to this, of course, is that cases are reassigned and the new prosecutor must get up to speed.

Boudin acknowledged this has been the case at times but that the pandemic has made some people reevaluate their life choices, including jobs. "It has its downsides," he said of turnover, "and cases can fall through the cracks. We're living through a two-year period where people are rethinking their life choices and leaving their jobs. The New York Times called it the 'great resignation.' The recall is trying to blame it on me." He said his office has recruited experienced prosecutors, including nearly a dozen former assistant district attorneys, and said that brings with it "new energy and new ideas."

"We can all agree that the status quo in San Francisco was not working," he told us. "Voters wanted and deserved a change." In fact, turnover at most DA offices is constant.

Criticism, praise in court
During an April 14 online interview with San Francisco Standard editor-in-chief Jonathan Weber, Boudin was asked about criticism his office received from the bench by Superior Court Judge Bruce Chan in September 2021, which was reported by multiple outlets. According to a transcript included in a packet from the Safer SF campaign, Chan said, "I have seen several other instances where the fundamentals of competent, professional prosecution have not occurred ..., I cannot express in any more certain terms my disapproval of the manner in which the Office of the District Attorney is being managed. We simply cannot have the current levels of inadvertence, disorganization, and expect there to be any public confidence in what we do here collectively."

The point is that recall proponents are highlighting a negative anecdote while omitting a positive one, which is not surprising, but not helpful to voters.

Doing what he said he'd do
In his conversation with us, Boudin was firm that he's done what he campaigned on: prioritize serious crime and hold law enforcement accountable. He has filed criminal charges against several San Francisco police officers. The first case to go to trial resulted in an acquittal. Boudin said that the jury's decision won't deter him. "Every case is different; every jury is different," he said.

Boudin told us that when he took office he inherited 5,000 open cases. He's working to resolve those cases; most of the non-serious ones likely will result in plea-bargains. At the time of our interview, there were four old homicide cases in trial.

Recent exoneration by his innocence panel
Boudin established an Innocence Commission in his office and recently a man was exonerated and freed after spending 32 years in prison for a murder he did not commit. According to an article in the San Francisco Chronicle, a panel of experts reviewed the case of Joaquin Ciria after a referral from the Northern California Innocence Project, which represented Ciria. The commission recommended Boudin join a motion to overturn the conviction, which he did. This is also what a DA's office should be doing; not just prosecuting defendants but fighting for justice for those cases in which people are wrongfully convicted of a crime.

Conclusion
Recalling an elected official requires serious consideration, and should, in our opinion, meet a high threshold of negligence, incompetence, or evidence of wrongdoing — which is why we supported the recall of the three Board of Education members earlier this year. In other words, officeholders shouldn't be recalled just because people don't like their policies or changed their minds. That's what elections are for. Boudin has not met the minimum offenses to be subjected to a recall. Can he improve upon some of his decisions? Certainly. But the recall proponents use sweeping generalizations and some cherry-picked data to paint a picture of a DA's office that is out of control. We don't see it that way.

We reported on the poll released in March by the Safer SF Without Boudin campaign that showed more than a majority of likely voters would recall him. However, Boudin has cited another poll done in conjunction with the Assembly District 17 race that showed tighter numbers, albeit focused on the eastern half of the city. As he said, the only poll that matters is the one on election day. On balance, Boudin has done what he said he would do as the city's top law enforcement official. We urge readers not to be swept up in the highly charged rhetoric coming from recall proponents. It's no secret that some Republican donors have contributed big bucks to Safer SF, though that campaign insists that 80% of its donors have given $250 or less, and 79% are from San Francisco. The influx of GOP money does raise questions, however, about the influence these donors want to have on a local election in a progressive city.

We did not endorse Boudin in 2019. However, we do not see a reason to recall him from office now.