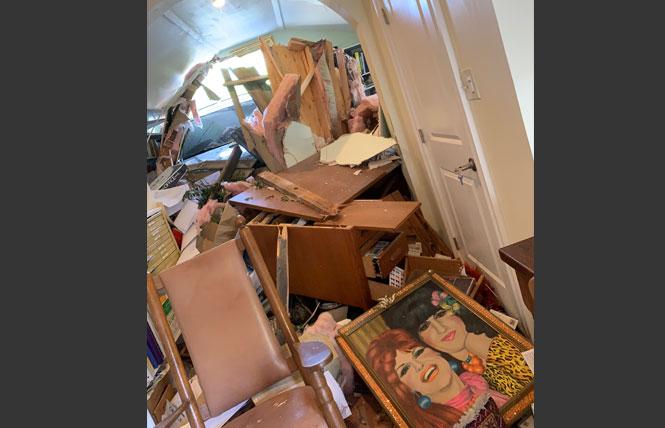 The Louise Lawrence Transgender Archive in Vallejo was damaged last month after a driver plowed into the converted garage that houses it and reportedly fled, while the founder is expressing support as she works to have the building repaired.

Ms. Bob Davis, a trans woman who founded the archive in 2017 — it opened in September 2018 — told the Bay Area Reporter in a phone interview that no one was injured during the incident, which occurred on March 31, Transgender Day of Visibility.

"I was rushing to events in San Francisco and ran into the archive to get some brochures," Davis wrote in an email to supporters. "Imagine my surprise when I was greeted by an SUV parked in the middle of the office. How did that get here??!"

Neighbors said the driver lost control, smashed through the rear wall of the archive, and ran. He hasn't been seen since, Davis added. "The damage was largely confined to the office, which is one of two rooms that houses the small archive. It obliterated the whole office," she said.

The archive is named in honor of the late northern California transgender pioneer Louise Lawrence (1912-1976), who began living full-time as a woman in 1942, first in Berkeley then San Francisco, as the B.A.R. noted in a 2017 article. She, along with Virginia Prince and others, published the first incarnation of Transvestia in 1952. Lawrence's address book was the initial subscription list, and she was instrumental in developing the trans community's connection to pioneering sex researchers such as Alfred Kinsey and Harry Benjamin, according to Davis.

Davis told the B.A.R. that Robert Oakley, the man who built out the archive — it used to be a termite-infested garage, she explained — came over the next day with plywood and 2x4s to cover up the gaping hole left by the vehicle.

"The police showed up at 1 a.m. and impounded the SUV so from 3 a.m. until he showed up I had this big hole," Davis said.

Oakley said in a phone interview that he's known Davis for about 20 years and remodeled the building for her a few years ago.

"It was quite an impact," he said of the collision. He said some of the electrical was torn out and the crash pushed the right side of the wall out. Fortunately, the circuit breaker popped so it didn't start a fire, he explained.

Davis said she's met with an insurance adjuster and is awaiting an estimate. But the repair work will be pretty significant, she said. The foundation is cracked, she noted, and there may be foundation damage in the other room of the archive. "They've got to take out two walls," she said.

Some musical instruments were also damaged, said Davis, a retired music instructor from City College of San Francisco. The next step, she said, will be getting people from the GLBT Historical Society to help her go through and pack up items to place into storage prior to construction.

Isaac Fellman, research archivist at the society, is organizing a team of archivists to come to LLTA for a cleanup and remediation day, Davis wrote in the email. The San Francisco-based historical society is the fiscal sponsor of the archive.

Davis thanked the organizations and people who have helped publicize the incident. While she has insurance, there is a high deductible and other expenses.

The Solano County Pride Center included the incident in its recent newsletter with a donation link. The Solano Stonewall Democratic Club and Vallejo Gay Network have also posted about it, Davis said.

"I'm so gratified by the response and support," Davis said, adding that Robyn Adams, who does web design and oversees social media for the archive, has been "pitching in and helping out."

In a phone interview, Adams, a trans woman, said that she has been sharing the news on social media helping to raise money.

"I'm quite delighted," Adams said of the community response. "It takes a difficult situation and makes it better."

Gwen Smith, a trans woman who writes the B.A.R.'s Transmissions column, is on the speakers' bureau for the archive and was saddened by the turn of events.

"One of the things that has long given me a sense of both purpose and pride over my years has been knowing that I am part of a much larger trans history," Smith wrote in an email. "As a result, I've been honored to be a small part of the Louise Lawrence Transgender Archive.

"Likewise, the damage it suffered feels all the more painful. With so much of our history being unknown, every archive is precious, and needs love, protection, and care," Smith added.

The archive is now closed and will remain so probably until this summer, Davis said.

To help rebuild the space and continue the archive's programs, Davis has announced the Louise Lawrence second annual birthday fundraiser. Lawrence's 110th birthday would have been April 28. To donate, click here.

For more information about the archive, check out its website.

According to a news release, the inaugural event aims to bring together the Bay Area leather/kink community to celebrate the leather flag and its creator, Tony DeBlase. It's also a fundraiser for the upkeep of the giant leather pride flag at the plaza and a festive send off for the local International Mr. Leather contestants, the email stated.

DeBlase, who died in 2000, founded DungeonMaster magazine in 1979, according to Leatherpedia. He purchased Drummer magazine in 1986 and sold it in 1991. He first presented the leather pride flag at IML in May 1989. He was posthumously inducted into the Leather Hall of Fame in 2010.

There will be two speakers at the upcoming flag day who will provide a historical perspective on the creation of the flag and share stories about DeBlase. It will be streamed during the virtual International Ms Leather/International Ms Bootblack contest that takes place this weekend.

SF gay choral group raises $750K
The San Francisco Gay Men's Chorus announced that it has raised $600,000 at its recent Crescendo benefit and silent auction. Combined with a $150,000 donation from Amazon, the event brought in $750,000, officials stated in an email to supporters.

The April 8 event, held at the Four Seasons Hotel, was also a farewell to artistic director and conductor Timothy Seelig, who was presented with a Lifetime Achievement Award. Seelig had announced in 2021 that he would be retiring at the end of the chorus' season this July.

This week, the chorus announced that Jacob Stensberg, a gay man, will be the next artistic director and conductor, as the B.A.R.'s Arts section reports.