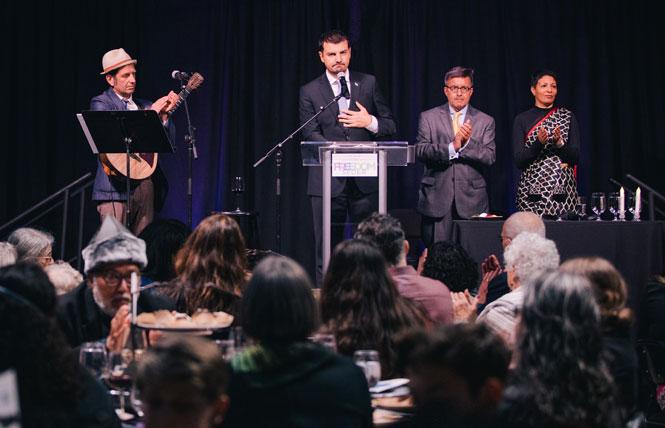 San Francisco's LGBTQ Jewish community spoke out against Russia's invasion of Ukraine and denounced the rash of anti-transgender legislation sweeping the United States at the recent Freedom Seder.

More than 200 people attended the in-person sold-out event to support the Consul General of Ukraine in San Francisco Dmytro Kushneruk at Grace Cathedral in Nob Hill. Kushneruk was a guest at the Seder and was seated next to gay state Senator Scott Wiener (D-San Francisco), who is Jewish and of Eastern European descent, including Ukrainian. An additional 30 people attended the event virtually.

LGBTQ Jewish speakers also spoke out against anti-trans legislation in Alabama and Arkansas and in support of activists fighting against similar bills across the nation.

Odesa, a port city and one of the hubs for Ukrainians fleeing to Europe, suffered two Russian missile attacks launched from the Black Sea targeting critical infrastructure April 3. No one was killed.

"Jews were killed by the Nazis ... for one reason: because they were Jews," he said. "Ukrainians are murdered by Russians just for the one reason — because they are Ukrainians."

Kushneruk noted the effect of the indifference shown by nations in the face of World War II in the 1940s.

"During the Second World War, many countries [and] nations — they show[ed] their indifference and wasted time to save the Jewish people," he said, noting Russians destroyed Uman, a holy place of pilgrimage for Hasidim, Orthodox Jews, in Ukraine. "Where they have to act and react faster, maybe the consequences would be not as for Jewish people.

"That's what we need from the world right now" — not apathy, he said. "I wish all of you not to stay aside. Not to get tired of this war. Not to be indifferent. Not to take a position of neutrality."

He told the audience that with support, "Ukrainian people will do the rest."

"We will protect Europe, protect freedom in the whole world," Kushneruk said, thanking the Bay Area's Jewish community. "Because what we Ukrainians need the most is peace. And we pray for peace to come to Ukraine as soon as possible."

Ukrainian President Volodymyr Zelenskyy has continued requesting help from NATO. By the end of last week, there were reports of dire situations for Ukrainians fleeing the war; more Russian airstrikes, killing dozens of the country's people at a train station; and the atrocities inflicted by Russian soldiers. United Nations Secretary-General Antonio Guterres made another appeal for the war to end.

Standing up to bullies
JCRC's executive director Tyler "Tye" Gregory, a gay man, opened this Seder, which was an intercultural, multifaith celebration ahead of Passover, by stating, "One thing that I love about the Seder is that it's all about standing up to bullies."

Passover is the Jewish holiday that celebrates the exodus of the Israelites from slavery in Egypt.

Gregory noted that this year Christianity, Judaism, and Islam, all three Abrahamic traditions, were celebrating their most important holidays of Easter, Passover, and Ramadan at the same time — a rare occurrence — and acknowledged the leaders from multiple faiths participating in the evening's ceremony.

"We say Dayenu," which means "enough" in Hebrew, Gregory explained, "and it's a perfect Jewish word."

Matan Zamir, a gay man who is the deputy consul general of the Consulate General of Israel to the Pacific Northwest in San Francisco, echoed local LGBTQ Jewish community leaders' calls.

"This is our job to stand out and call out loud," he stated to the Bay Area Reporter after the Seder.

Wiener held a candle for the candle-lighting at the start of the Seder, stating it kept "the flame of justice alive to sustain our communities," and that it symbolized "hope and the coming of redemption for oppressed people everywhere."

"We pray that they will guide us in taking action to ensure freedom for everyone," he said.

Speaking with the B.A.R. afterward, Wiener further made the correlation between the story of Passover and how it was apt to Russia's invasion of Ukraine, and LGBTQ American activists' current battle against state-sanctioned anti-transgender bills.

The story is about "a tyrant trying to destroy entire people," Wiener said. He called the situation in Ukraine "another version" of the story that is currently playing out, pointing to the indiscriminate bombing and mass murders of people as an "effort to effectively erase Ukraine."

"Tonight, we bring committed fighting for justice here and around the world," Wiener said. Of Russia's anti-LGBTQ record, which condones violence against LGBTQ people and where people disappear, he said, "We don't need that spreading anywhere else."

Martin Rawlings-Fein, a Jewish bisexual transgender man and community leader who read the "Identity" passage for the second cup of wine at the Seder, reminded the audience about the importance of allyship working across communities.

Yearning to breathe free
"This is something we cannot lose sight of. We can't lose sight of the people and the human collateral," Rawlings-Fein told the B.A.R. after the event, pointing to Ukraine and Afghanistan, especially for LGBTQ people. He noted that bisexuals are everywhere and fight for everyone; "We have a duty to really bring it up in all the uncomfortable places."

Agreeing with Gregory, Rawlings-Fein said that the Bay Area must do everything it can to support Ukrainians — straight and LGBTQ — by welcoming those fleeing the war into the community.

Ukrainians fleeing the Eastern part of the country swelled to more than 4.5 million as of April 10, the Washington Post reported.

"San Francisco needs to be a place where we welcome a stranger," Rawlings-Fein said, echoing Gregory. "Welcoming is a huge part of why San Francisco is such a place that it is."

"If there's a war somewhere and you're running from it, you should have a place in the United States," he said.

Gregory said the Jewish community is "deeply concerned about both LGBTQ and Jewish communities" fleeing Ukraine and seeking refuge, "we need to be able to have more refugees here.

"The Bay Area continues to be a refuge for LGBTQ people around the world," Gregory continued. "We're committed to bringing the Jewish community into that fight and to making sure that we can bring in more people."

In this case, it's queer Afghans and Ukrainians who are "the strangers."

"They don't have a voice. We have to be their voice," he said.

Gregory hopes that by "lifting up" Ukrainian Consul General Kushneruk at the Freedom Seder, "it inspires more of our community to get involved," calling it "essential."

He added from "day one" Bay Area's Jewish community has provided humanitarian aid to Ukrainians.