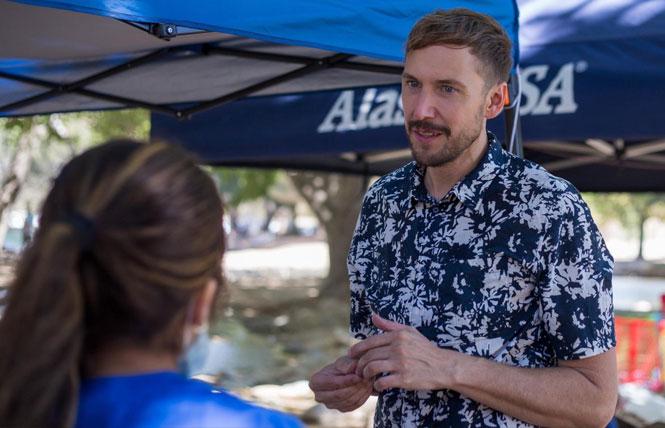 In the very first line of his campaign bio, Derek Marshall comes out as "an openly gay progressive Democrat and political organizer running to represent the people of the High Desert, the valley, and the mountains." It is indicative of how the formerly conservative area east of Los Angeles has changed politically over the past decade.

More young professionals and families pushed out of coastal Southern California cities due to high housing costs have migrated over the Cajon Pass to Victorville, where Marshall lives, in San Bernardino County. Marshall, 39, first discovered the area in 2009 and is now aiming to represent it in the U.S. House of Representatives from the state's 23rd Congressional District.

"I think there is a lot of misunderstanding about communities like mine from folks that live in the cities and sort of have this assumption about folks out here that we are somehow less intelligent and somehow more conservative. There are just a lot of biases and misinformation about our communities," said Marshall during a recent phone interview with the Bay Area Reporter.

He doesn't believe his sexual orientation will hinder his ability to attract support from residents of the district, which Marshall said has a median age of 32. Someone being LGBTQ isn't an issue, he added, for most people he's met as he campaigns.

"The younger a voter is, it makes less of a difference," Marshall noted.

Rather, it is just one factor that is helping him to attract attention to his candidacy. And, Marshall said, he felt it was important for him to serve as an out role model at a time when the rights of LGBTQ people, especially youth, are under attack in states across the country and parts of California.

"I think visibility is important," said Marshall as for why he decided to be so upfront about being an out candidate. "It is really important for folks like us to provide that visibility because there are a lot of kids who are still out here in high school still being victimized by some form of homophobia."

According to state voter registration data released this month, Democrats account for 33.57% of voters in the House district and Republicans number 36.51%, with independents making up 20.51%. The seat now includes the Big Bear Lake recreation area and stretches east to the border with Nevada.

"Probably, by the election in November, Democrats will close that gap," Marshall predicted of the registration breakdown. "Redistricting added into the district Lake Los Angeles and Loma Linda, which are heavily Democratic."

Yet, national Democrats have not targeted the race as one they think will flip red to blue. Analysts of House races also have not deemed the contest for CA-23 as being competitive or the incumbent, Congressmember Jay Obernolte (R-Hesperia), as being in trouble. The LGBTQ Victory Fund, which works to elect LGBTQ candidates across the country, has yet to endorse Marshall ahead of the June 7 primary.

But Marshall has been winning over California Democrats and LGBTQ leaders, securing the endorsement of the statewide party and Marge Doyle, a lesbian who lost her 2018 bid for a Yucca Valley House seat that has been incorporated into the sprawling new CA-23 district. LGBTQ political groups, the Stonewall Democratic Club of Los Angeles and the Desert Stonewall Democrats of Palm Springs, have also endorsed Marshall, as has statewide LGBTQ advocacy organization Equality California.

"My big thing is organizing. When we organize, we win," said Marshall, who worked to elect Katie Hill in 2018 as the state's first bisexual congressmember in a northeast Los Angeles County district. (She resigned in 2019 and now runs her own political action committee to help elect other people to office.)

Also in the primary race is Democrat Blanca A. Gómez, who serves on the Victorville City Council. She has been fighting misdemeanor charges related to two altercations she had last year.

Long Beach Mayor Robert Garcia is seeking the open, new 42nd Congressional District along the coast of Los Angeles County. Former federal prosecutor Will Rollins is aiming to oust from office conservative Congressmember Ken Calvert (R-Corona) in the race this year for the new 41st Congressional District that includes a large part of the Palm Springs area.

Takano and the Victory Fund have both endorsed Garcia and Rollins. Marshall has not spoken directly to Takano about also backing his campaign but is seeking the Victory Fund's endorsement. A spokesperson for the organization did not respond to the B.A.R.'s request for comment on whether it will do so.

"I like to say we are the strongest suited to be able to defeat Obernolte," said Marshall.

After graduating from American University in 2006, Marshall moved to Germany. He co-founded a global research initiative for the United Nations then helped open the Berlin office for online travel agency KAYAK as its director of internationalization. He also hosted arts events and parties for the local LGBTQ community at his queer bar CLUB.

He first learned of Victorville after a younger brother moved to Southern California from Massachusetts, where they grew up, and went camping with him in the area 13 years ago. In 2012, Marshall decided to live there full time after having split his time between Europe and California for several years.

A renter, Marshall drove for Uber while working on various political campaigns. He served as a staffer in Nevada on the 2020 presidential bid of U.S. Senator Bernie Sanders (I-Vermont). Now he is largely focused full time on his own campaign but does continue to do some political consulting.

"There have been times of my life where I lived paycheck to paycheck. I am running because it just makes me angry to think we are the richest country in the history of the world, yet we can't effectively invest in our people," said Marshall. "I really want to help be a part of changing that."

To learn more about Marshall and his candidacy, click here.