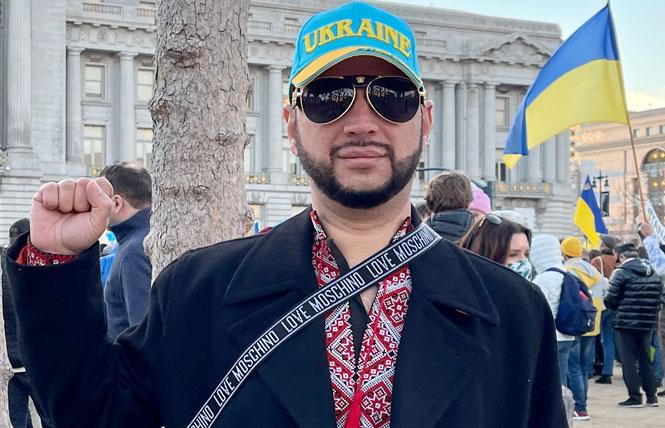 "It was a nightmare since the day started," said Volobrynskyy about Russia's invasion of Ukraine that began February 23.

Volobrynskyy, 40, was born and raised in a Jewish-Russian-Ukrainian home in Odesa, the country's third largest city, until he was 20 years old, he told the Bay Area Reporter. That was when he and his father joined his mother in the United States as a part of a reunification program in 2002. His mother obtained political asylum in the U.S. in 2000.

"You can close your eyes and picture where you're from," he said, seeing where he grew up being bombed, "the uncertainty of it, the horror of what may happen, and the horror of what's actually happening is devastating."

Ukraine, a former Soviet bloc country, broke away from the old Soviet Union in 1991 nearly 70 years after it became one of the founding Soviet states in 1922. More than 30 years later, Russian President Vladimir Putin wants the Eastern European country back under Moscow's control, but Ukraine is looking to Europe for its future.

Eugene Bilotskiy, 22, a gay man from Kyiv, spoke to the B.A.R. on WhatsApp March 21 from the western Ukrainian city Lviv, where he evacuated with his mother and sister the first day Russia invaded the country. Lviv is one of Ukraine's pivotal cities, serving as a stop on the route to Poland's border. Russian missiles hit the city March 27, but since then the city has been calm.

Bilotskiy, the manager of the paralegal network division of Kyiv's HIV/AIDS organization Alliance.Global, said he has felt a mixture of emotions from sadness to anger toward Russians.

On March 19 and 20 he saw pictures and videos of Kyiv, "I start crying," he said about seeing his city decimated by Russian bombs.

More than 4 million Ukrainians have so far streamed out of the country across the border into Poland and other surrounding countries. Others have stopped short of leaving the country, staying in Ukraine's western cities near the Polish, Moldavian, and Belarusian borders.

Ukraine is also bordered by Hungary, Romania, Slovakia, and Russia, not the friendliest countries for LGBTQ people.

Those who have not left their homes or Ukraine are joining the fight against Russia, including LGBTQ soldiers, and helping fellow Ukrainians struggling to survive, people the Bay Area Reporter spoke with said.

Ukrainian men ages 18 to 60 are not allowed to leave the country. They are being called to fight against Russia.

Ukrainians' efforts have been successful within the last week. Ukrainian soldiers have pushed Russian soldiers back away from Kyiv, the capital city where Ukrainian President Volodymyr Zelenskyy is urging for support from the world while continuing to negotiate with Russian diplomats.

Zelenskyy has called to close Ukraine's airspace and he wants to fast track making Ukraine a member state of the European Union. Since 2017, the Eastern European country has had close economic and deepening diplomatic ties with the E.U. through an association agreement.

Currently, Albania, Montenegro, North Macedonia, Serbia, and Turkey are in the process of joining the E.U. Kosovo and Bosnia and Herzegovina are classified as "potential candidates," but haven't met the E.U.'s criteria to become candidates as member states.

NATO responded swiftly to Zelenskyy's calls for help with humanitarian aid and military training and weapons without stepping completely into the war. Despite its desire to join the military alliance, Ukraine was never granted membership and Zelenskyy has offered the country's neutrality as a bargaining chip in his negotiations with Moscow.

Jessica Stern, U.S. special envoy to advance the human rights of LGBTQI persons at the State Department's Bureau of Democracy, Human Rights, and Labor, told the Washington Blade that she is monitoring the situation closely. Since the invasion, she and her team have worked with LGBTQ activists within Ukraine and in bordering countries to provide them with humanitarian and financial support and track human rights abuses.

Last month, U.S. intelligence discovered Russian authorities planned to round up and detain or kill journalists, activists, minorities, dissidents, and LGBTQ Ukrainians. Crocker's letter to the council described the hit list as an effort by Putin to eliminate resistance after the invasion.

"I know that this is fiction, there is no such list," Peskov said.

Russia isn't known to be an LGBTQ-friendly country or welcoming of ideas and thoughts that are not from Putin or the Kremlin. In 2013, Putin signed the Anti-Homosexuality Propaganda Law limiting LGBTQ organizations from speaking about sexual orientation and gender identity with anyone under the age of 18. Since the law went into effect, Russia's LGBTQ community has suffered an onslaught of violent attacks. Government officials detain and put LGBTQ activists on trial. On Russia's streets, LGBTQ people report an increase in assaults and killings. Many of these cases go unsolved.

Putin hasn't stopped pushing his anti-gay, pro-traditionalist agenda. In 2021, he signed a law banning same-sex marriage and stood by Chechen strongman President Ramzan Kadyrov's government-sponsored crackdown on the Northern Caucasus' LGBTQ community since 2017. (Kadyrov, a Putin supporter, is reportedly fighting in Ukraine. His right-hand man, General Magomed Tushayev, who was a key figure in Chechnya's anti-gay crackdown, was killed in battle in Kyiv March 1.)

Russia annexed Crimea from Ukraine in 2014 after it invaded and occupied the peninsula.

LGBTQ Ukrainians fear the same will happen to them if Russia wins.

The war has already claimed the life of a queer Ukrainian activist, not related to anti-gay violence. Elvira Schemur, also known as Elya Schemur, 21, was killed March 1 when a Russian missile struck a regional administration building in the city where she was volunteering, reported the Blade.

The same day Schemur died an unknown group of people broke into the Kyiv office of Nash Svit and attacked four activists sheltering there before ransacking the office.

LGBTQ activists, such as Olena Shevchenko, chair of LGBTQ organization Insight, held out in Kyiv until March 10 when, like other LGBTQ leaders in the city, she and her team evacuated to Lviv, reported the Blade. 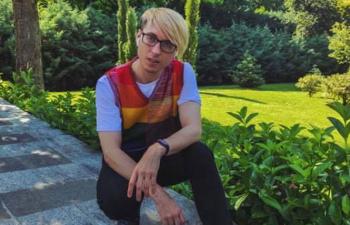 "They know that Russian victory equals death for the LGBTQ community," Ivan Tereshchuk, head of the Odesa arm of LGBT Association Liga, a national LGBTQ organization, said, stating that in Russian-occupied territories of Ukraine they are starting to see activists, journalists, and other people disappearing. He believes the LGBTQ community is next, "because they hate LGBTQ people."

"The best way to help is to help the army because if Ukraine wins, everybody wins," said Tereshchuk, a 27-year-old gay man.

Taking up arms
"Ukraine is tiny and it's putting up a hell of a fight," said Volobrynskyy.

Gay Ukrainian soldier and activist Viktor Pylypenko, 35, came out of retirement to fight the Russians.

"I am an LGBT activist in the military," the leader of a group for Ukraine's gay military men told San Francisco-based Treasure Island Media [LINK: www.treasureislandmedia.com] in a recent interview. "If they capture me, I will be tortured and killed in a very brutal manner, especially if I am captured by Chechens. There will be no mercy. I think I would rather kill myself than give myself into captivity."

Kyiv Pride is organizing to support Ukraine's military by training its members in first aid and donating blood and funds to the army, Edward Reese, project assistant for Kyiv Pride, told CBS News.

If Russians take over Kyiv, Reese vowed to fight back.

"We actually don't believe that it will happen, but if it happens, I'm sure that many of the LGBTQ people and myself, we won't flee the country and we will fight and destroy it," the New York Times quoted him as saying.

Queer Ukrainians help other LGBTQs
LGBTQ Ukrainian activists in Lviv and Odesa, two pivotal cities near the Polish and Moldovan borders, respectively, are helping queer Ukrainians seeking shelter in the cities or passing through to get to Europe.

Bilotskiy and Tereshchuk continue to work for their respective organizations through the war.

For those escaping to western Ukraine or Europe, "These shelters really help people escape. They can spend the night, relax, and get ready for [the] last leg of their trip," he said.

Liga is also paying for rent, food, and other basic necessities for LGBTQ people, especially young queer people, who have been kicked out of or left their families due to homophobia and are struggling. The need is so great that the organization received 273 applications for financial aid. The organization was only able to award 46 grants, he said.

Both organizations are providing legal assistance helping people, especially transgender people, to "find a way for them to leave the country if that's what they want to do," Tereshchuk said.

Many transgender people are trapped in Ukraine due to not having documentation that matches their gender identity or haven't had gender-affirming surgery.

Tereshchuk would like to see global pressure placed on Ukraine to advance LGBTQ rights in the country. For the moment, he called for pressure to help transgender people, especially transgender women, get out of the country to safety in Europe.

"It's next to impossible because according to their documents they are male and they're not being allowed to leave," he said.

Ukrainian transgender man, Andriy, who used a pseudonym, and his mother, for whom he is her caregiver, are lucky. They got out of the country with the help of American transgender model and LGBTQ activist Rain Dove Dubilewski. Dubilewski launched Safebow, a group of 50 volunteers who are working to get LGBTQ and other vulnerable people out of Ukraine to safety.

It was traumatizing for Andriy to escape. He transformed himself briefly back into being a "girl." He put his mother's shirt on and painted his nails violet. He whispered when he spoke to keep from being detected and his mother told officials at checkpoints they lost their documents, he told Business Insider.

"When we arrived at Przemysl, we had to pass through customs control. It didn't take even three minutes," Andriy said. "I've never been so happy and exhausted."

#StandwithUkraine
Many LGBTQ people around the world have expressed concern about what might happen to Ukraine's LGBTQ community if Russia is successful with its invasion.

LGBTQ activists and organizations in Europe, especially Ukraine's neighboring countries, and North America have mobilized to support queer Ukrainians fighting the war, protecting communities, and those who have fled the country to safety.

LGBTQ Polish organizations work to locate and identify LGBTQ Ukrainian refugees by handing out fliers at bus and train stations. Their goal is to provide assistance providing shelter, food, legal services, employment, and obtaining documentation to allow them to live and work in Poland.

LGBTQ organizations such as Prague Pride in the Czech Republic, are also offering help to LGBTQ Ukrainians who arrive in the country's capital city.

In San Francisco, Volobrynskyy, a labor organizer and LGBTQ activist, is raising awareness and fundraising to help Ukraine's LGBTQ community. Patrons of Oasis nightclub have donated more than $4,000 that Volobrynskyy has given directly to Ukraine's queer organizations in an ongoing campaign with the help of his friend and nightclub owner D'Arcy Drollinger.

Volobrynskyy has also set up a donation account through PayPal (see where to donate below).

Bilotskiy is afraid the world will forget about Ukraine like it forgot Afghanistan, he said.

"I don't want people to forget about Ukraine because, at a minimum, it's also Europe," Bilotskiy said.

Where to donate
Volobrynskyy's campaigns via PayPal or Venmo.

Direct help for the Ukrainian army.

'Compartment No. 6' - a train journey worth boarding