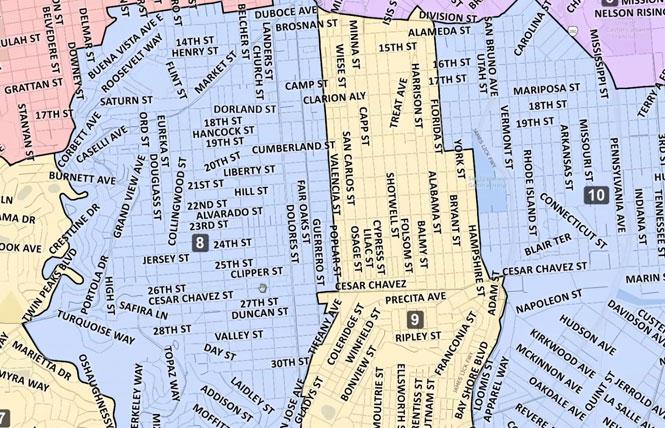 The current map of Districts 8 and 9 was shown during a meeting of the San Francisco Redistricting Task Force. Photo: Screengrab

The task force convened a meeting March 18 specifically to take public comment on Districts 8 and 9, which includes the Mission, Bernal Heights, and Portola. More than 100 people addressed the body, with most critical of the proposed boundaries for the two supervisor districts.

Chair the Reverend Arnold Townsend noted that the draft map was developed by a consultant after the task force asked for a deviation of the current boundary lines to start doing its work. San Francisco's 11 supervisorial districts are redrawn every 10 years based on census data so that they each have roughly similar populations.

Things the task force considers include boundaries, neighborhoods, and communities of interest. The task force is to submit a map to the Board of Supervisors by April 15.

"The map that came out was produced to have a map to work from," Townsend said. "We have 10 straight mapping meetings. We asked for a 1% deviation for that map. The task force will not have a map until a final map."

Task force member Jose Maria (Chema) Hernández Gil noted at the outset of the meeting that "District 8 needs to lose a few folks and District 9 needs to gain a few folks."

District 8 currently has about 82,000 people while District 9 has about 75,000, according to figures presented at the meeting.

Under the draft map District 8 would gain the area west of Twin Peaks and remove the northern part of the Castro, which includes Duboce Triangle, Corona Heights, and the area around Buena Vista Park — all have significant LGBTQ populations and would shift to District 5. Its eastern boundary along Valencia Street would also be changed under the current map.

It would result in gay Supervisor Rafael Mandelman, who currently represents District 8 and is the lone LGBTQ member on the board, being drawn out of the district, as he lives on a block of Valencia that would move to District 9. If approved, it would mean he wouldn't be able to run for reelection this year unless he moves.

"This map is ridiculous and offensive," Mandelman tweeted earlier this month.

Gay state Senator Scott Wiener (D-San Francisco) was also upset with the preliminary map, tweeting that "it completely screws over the LGBTQ community by chopping in half the precincts with the heaviest LGBTQ populations — both progressive and moderate precincts."

Wiener, too, would be drawn out of District 8, his electoral hub from his days on the Board of Supervisors, and end up in District 5 under the proposed map.

"It's horrifying," he wrote.

For District 9, the preliminary map would add parts of South of Market and lose the western half of the Portola.

Concerns
Residents of Forest Knolls told the task force that they did not want to become part of District 8 — right now they are in District 7.

"We're on the back of Twin Peaks, a natural boundary," said Walter Kaplan.

Many of the speakers commented about the preliminary map for District 8. Right now, one side of Valencia Street is in District 8 and the other side is in District 9. Some people wanted it to remain that way while others advocated for the street to be in one district.

Jonah Buffa, president of the Valencia Corridor Merchants Association, said the task force "should unify the street with the district that includes the Castro."

His comment was echoed by other speakers such as Manny Yekutiel, a gay man who's owner of the eponymous cafe and event space at Valencia and 16th streets in the Mission district. Yekutiel is also on the board of the San Francisco Municipal Transportation Agency, though he stressed he was speaking as an individual. On communities of interest and economics, he said, Valencia Street more closely aligns with the Castro.

Alex Randolph, a gay man and former trustee for City College of San Francisco, lives in District 8 and serves on the board of Equality California, the statewide LGBTQ rights organization.

"The neighborhoods in District 8 cannot be divided," he said, adding that the Board of Supervisors has had only one out member since 2017, down from three in the years before that. "We're lucky that District 8 has consistently elected LGBTs."

But Randolph said that the number of LGBTQ residents would be diluted under the preliminary map if neighborhoods like Corona Heights are removed from the district.

Alex Lemberg, president of the Eureka Valley Neighborhood Association, is a nonbinary queer person who said that they "work very frequently with leaders of Duboce Triangle and Corona Heights."
"The LGBTQ community and economic survival of the Castro is linked to Duboce Triangle, Corona Heights, and Twin Peaks," Lemberg said, adding that the LGBTQ vote should not be diluted.

Dave Karraker, a gay man who is on the Castro Merchants Association's board, said that Duboce Triangle "effectively is a Castro neighborhood. I don't think District 5 matches District 8. The north side of Market Street would be a tiny sliver of District 5."

Frank Tizedes, president of the Duboce Triangle Neighborhood Association, said that any move out of District 8 "would impact our community voice."

Erick Arguello, a gay man who is president of the council for the Calle 24 Latino Cultural District along 24th Street in the Mission, suggested the boundary line be extended to Guerrero Street for District 9 so that Latinx businesses and the Women's Building would be communities of interest with that district.