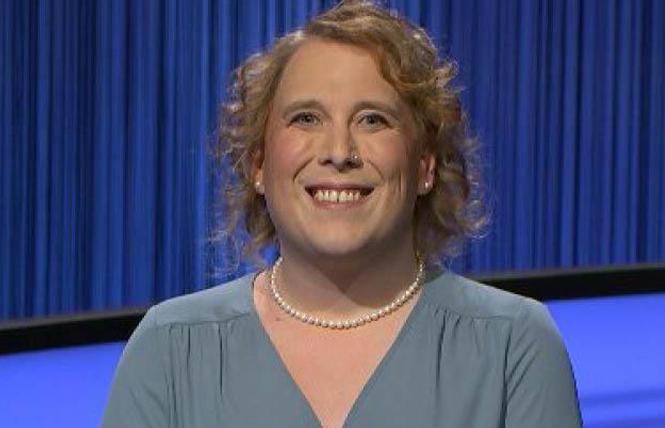 She may have had her "Jeopardy!" winning streak snapped, but champion Amy Schneider will be at the Commonwealth Club in San Francisco next week for a virtual and in-person event to talk about her history-making run on the TV quiz show.

Schneider, of course, fell from the top ranks of the popular game show January 26, after 40 consecutive wins and earnings of nearly $1.4 million. Schneider was bested by Rhone Talsma, a librarian from Chicago, during a Final Jeopardy response that involved this clue: "The only nation in the world whose name in English ends in an H, it's also one of the 10 most populous."

Schneider came up with a blank response. Talsma wrote down, "What is Bangladesh?" This earned him $29,600. Thus, Talsma became the new "Jeopardy!" champion, but he lost the next day. Schneider will return for the show's "Tournament of Champions" later this year.

Schneider, 42, had made a memorable run on the show. Not only was she the first transgender woman to qualify for the Tournament of Champions but she also became the first woman on the quiz show to win more than $1 million. She had the second-longest winning streak in the show's history, behind only Ken Jennings, and is ranked fourth to win more than $1 million. Her cash winnings put her behind Jennings ($2,520,700 after 74 games), James Holzhauer, ($2,462,216 after 32 games), and Matt Amodio ($1,518,601 after 38 games). Jennings is currently hosting the show following the 2020 death of longtime host Alex Trebek.

Schneider could not be reached for comment. She told NBC News that she regrets nothing.

"I got about $1.2 million more than my best case scenario in my imagination," she told the outlet.

Schneider, a software engineer manager who lives in Oakland, had been watching the show since she was in kindergarten. In eighth grade, she was voted "most likely to appear on 'Jeopardy!'" In an interview with Emily St. James, Schneider mentioned that she got into trivia thanks to her family upbringing.

"As far as trivia, part of it is just the luck of genetics. That's how my brain works. Things stick in it. I definitely think a lot of it goes to my mother. She was a college professor and a math teacher. She was definitely about what you'd call the life of the mind and intellectual achievement and stimulation as its own reward."

Schneider auditioned to be on the show back in 2020. Due to delays because of the COVID-19 pandemic, she began taping the shows last September and on November 17 made her TV debut.

In an Instagram Live chat last week, Schneider told Anthony Allen Ramos, GLAAD's head of talent, that she had her qualms about being on TV.

"I definitely was concerned about being trans in public, that can go bad for people sometimes. But once my episodes started airing, I was really surprised by how overwhelmingly positive it was," she said. "There were definitely negative comments out there, and I definitely read a few more of them than I should have. But there weren't that many, and almost everybody was just happy for me and excited for me."

Schneider also mentioned to Ramos that her presence has been positive for parents of trans children.

"[I've been] hearing from a lot of parents and grandparents of trans people," she said. "What they've told me, and this is what I wasn't expecting, is that [watching me] made them feel better about their trans loved ones, that they could be out there successful. And I was like 'Wow yes, they can, and I agree.'"

And she said that being trans had made her a stronger opponent.

"There's some overlap between being trans and being nerdy, you kind of see that out there. I think that may be because, being trans as a child, I was always trying to put myself in the place of women and watch them, and see what they're doing, and try to imagine what their life is like," she said. "And I think that sort of projecting yourself out, you become interested in learning. Whether it's just facts in general, or maybe getting into a certain fandom really hard, or whatever it may be, I think maybe there's some connection right there."

GLAAD did not respond to a request for comment. As the B.A.R. previously reported, Nick Adams, director of transgender representation at the organization, commended Schneider's impact on the show in a statement.

"Amy Schneider's incredible run on 'Jeopardy!' allows families all over the country to get to know her as someone who is great at word puzzles, has in-depth knowledge on a range of topics, and who also happens to be a transgender woman. Amy is using her history-making appearances and new platform to raise awareness of transgender issues and share a bit of her personal story too."

Schneider told Ramos that her coming out wasn't so bad.

"I'd say that one thing that was true for me, at least, was that I feared so many things that didn't end up happening," she said. "And what I thought it was going to be like, for the most part, didn't occur, didn't materialize, those things I was afraid of. There's a good chance that if you're in that position, that you're like I am, and that you're thinking of everything that might go wrong, that might be hard. I would say that's not realistic, that's not the right way to think about it, and that also there's going to be so many unexpected things that you might get out of it that you're not anticipating."

GLAAD announced that Schneider would receive a special recognition honor at its 33rd annual GLAAD Media Awards April 8, which honors media for outstanding representation of LGBTQ people and issues.

Schneider's Commonwealth Club appearance is set for Thursday, February 10, at 12:30 p.m. The program is free for members. Others can purchase tickets for either in-person or online.