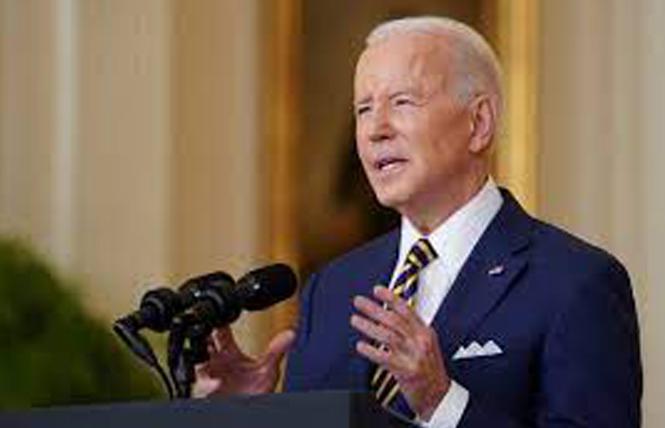 President Joe Biden marked his first year in office last week and while he, Vice President Kamala Harris, and the administration have made progress on some LGBTQ-related issues, there is still much to do. Unfortunately, the continued polarization in Washington, D.C., especially in Congress, likely means that significant achievements for equality look uncertain. Biden only has until the November midterm elections to work with a Democratic-controlled Congress, and even that is largely in name only. The Democratic majority is slim in the House of Representatives and non-existent in the Senate, where bisexual Senator Kyrsten Sinema (D-Arizona) and Senator Joe Manchin (D-West Virginia) are determined to thwart Biden's domestic agenda at every turn.

Upon taking office last January, Biden quickly reversed the military's ban on trans service members. In coordination with Defense Secretary Lloyd Austin, Biden issued an executive order to rescind former President Donald Trump's ban, ending the yearslong nightmare for transgender troops who were already serving our country or who wished to serve. In terms of health care, Biden appointed Dr. Rachel Levine, the highest-ranking and first Senate-confirmed openly transgender government official in U.S. history. Biden also appointed out federal judges (although so far only one has been confirmed by the Senate) and other high-ranking officials, such as former OutRight Action International Executive Director Jessica Stern as the U.S. special envoy for LGBTQ rights.

With the news Wednesday that U.S. Supreme Court Justice Stephen Breyer will retire this summer, the conservative-dominated court will lose one of its staunchest allies for advancing LGBTQ equality. Biden needs to nominate a jurist who will also defend the equality of LGBTQ Americans, and the Senate Democrats need to unite to ensure the person is confirmed.

The administration has a mixed record addressing the COVID-19 pandemic. It did succeed at its promise of rolling out vaccines efficiently, and today 210 million people — 63.7% of Americans — are fully vaccinated. Among elderly Americans, a group at higher risk of dying from COVID-19, over 85% have been fully vaccinated. On the other hand, the administration has had problems adjusting to the changing realities of the pandemic. It was too slow to respond to both the Delta variant and the highly transmissible Omicron variant with adequate supplies of test kits. The ones being mailed out now should have been sent in late November when the variant was first discovered. Vaccine shortages marred the rollout last year, though that has significantly improved; now unvaccinated people just need to get the shot and get over all the bogus claims made by supposed "experts" like Green Bay Packers quarterback Aaron Rodgers and conspiracist Robert F. Kennedy Jr. The administration has been especially slow collecting sexual orientation and gender identity data (SOGI), not only for COVID, but for myriad matters. Lambda Legal Defense and Education Fund issued an LGBTQ+ progress report on Biden's first year. It lists data collection on LGBTQ+ people and people living with HIV as a major goal for Biden's second year. "The administration must collect additional data, provide analysis, and release to the public findings on HIV-related disparities in stigma, discrimination, new infections, knowledge of status, and more among marginalized segments of our society," Lambda Legal's report states. The administration should initiate new rulemaking to reinstate the national collection of data on tribal and LGBTQ+ foster youth and reinstate the collection of information about trans older adults in the National Survey of Older Americans, the legal group noted. Health and policy inequities can only be corrected and improved based on comprehensive data collection of the population.

Protecting voting rights is at the top of Lambda's list, and ours too. Last week, Senate Democrats failed to pass voting rights legislation — thanks to Sinema and Manchin, who voted against a filibuster rule change requested by Senate Majority Leader Chuck Schumer (D-New York). Voter suppression tactics primarily used in red states work to silence LGBTQ+ community members, especially those who are people of color. Biden waited too long to make a major speech on the issue and he didn't employ Harris, whom he tasked with protecting voting rights, in an effective way. Though to be fair, Harris is often stuck in Washington in case she's needed to break a 50-50 tie in the Senate.

Looking ahead, we hope Biden ramps it up — in words and action — especially in key areas like protecting trans and gender-nonconforming youth. According to Lambda Legal, the Department of Education is expected to issue proposed non-discrimination Title IX rulemaking in the spring. This should revoke the final regulations made during the Trump administration and clarify Title IX's prohibition on sex discrimination that protects trans students in educational programs and activities.

The administration must issue new regulations to improve the ability of refugees, including LGBTQ+ and those living with HIV, to seek asylum in the U.S. This is a major problem right now, especially in Afghanistan and at a large refugee camp in Kenya. Lambda Legal stated that the administration must end the "Remain in Mexico" policy and stop deporting immigrants who are otherwise legally entitled to asylum or other forms of relief.

Overall, Biden is an improvement over the last president, but his achievements so far are not being effectively communicated to the public and he doesn't speak forcefully enough to our nation's problems. Conservatives will never like him, but Democratic voters, which include most LGBTQ+ people, need results from this White House. The time for half-hearted responses is over. As long as the Senate remains a huge barrier against action, the Biden administration must deploy the power of executive orders and other mechanisms to rescind the remainder of Trump's hideous policies in education, health care, and immigration.