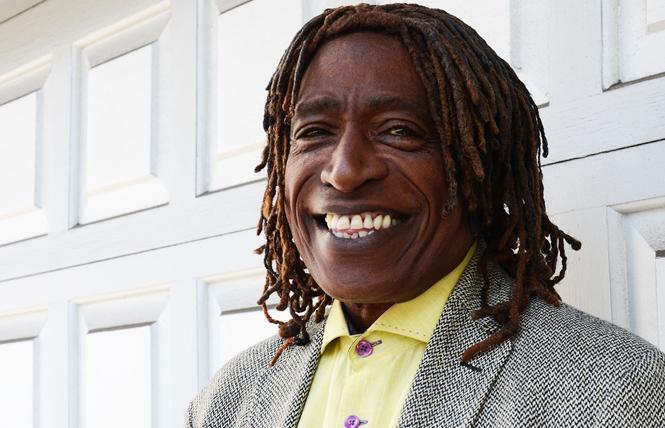 A caregiver for the late gay activist Ken Jones is raising $15,000 via an online fundraiser to have a bench installed and dedicated to him at the National AIDS Memorial Grove in San Francisco's Golden Gate Park.

The fundraiser has raised $3,710 toward its goal as of the afternoon of January 25.

As the Bay Area Reporter reported last January, Jones was a Black man who was key to the desegregation of LGBTQ activism.

Jones was a core volunteer at the Kaposi's Sarcoma Research and Education Foundation, which became the San Francisco AIDS Foundation; created and managed the first hundred-mile AIDS Bike-a-Thon from San Francisco to the Russian River; was the first Black chair of the San Francisco LGBT Pride Celebration Committee; brought visibility to disenfranchised groups as part of Pride's outreach; and served on the citizen review board of the BART Police Department following the BART police killing of Oscar Grant.

At the time of Jones' death from cancer, Sanjai Moses — who Jones helped to raise — was taking care of him.

Moses, who is queer, told the B.A.R. last week that the inspiration for a bench came from advice Jones' friend and fellow gay activist Cleve Jones (no relation) told her during Ken Jones' illness.

"When Ken was really sick, Cleve was encouraging me to take a moment to catch my breath and take a moment of solitude and he said the grove was a great place to do that," Moses said. "So it made sense to have a remembrance to Ken and his dedication to HIV activism there."

Cleve Jones told the B.A.R. that the bench would be a great way "to honor the dedication of service [Ken Jones] gave in the fight against HIV and AIDS."

Cleve Jones said that it has been a difficult year for him, having lost Ken Jones and gay singer-songwriter Blackberri: both longtime friends. Blackberry died December 13.

"Ken and I worked together a lot. He was one of the first people at the San Francisco AIDS Foundation. He also worked at the quilt, and we spent a lot of time together," Cleve Jones said, referring to the AIDS Memorial Quilt that he co-founded. "Ken ended every conversation, every call, and every conversation with 'peace and love.' That's what he was about."

The AIDS grove was first established in 1991. It became a national memorial by federal law in 1996. In 2019, the grove took over stewardship of the AIDS quilt, and the panels are stored in a specially-designed warehouse in San Leandro.

John Cunningham, a gay man who is CEO of the grove, said that there are two other ways besides a bench to honor an individual person at the site.

"There's a Circle of Friends engraving and individuals or organizations can do boulders, or in this case, a bench," Cunningham said.

Moses said that Cunningham got her fundraiser set up with the grove's website.

"I think that Ken of all individuals, who'd been in the fight as long as he was, regarding not just HIV and AIDS but social justice, is so deserving of a dedicated space where those who loved Ken can visit and people can learn more about Ken," Cunningham said.

Moses said another reason for the bench is because Jones was unable to get a proper memorial celebration due to the COVID-19 pandemic.

"I know many people want to pay tribute to him and I was thinking of a big blowout party with disco music, but that's not happening, it's not possible, so what better way than this great public space," Moses said.

Moses' goal is to have the bench in place by Pride this June.

"The money is trickling in in small amounts and that's what it means for a community to come together," Moses said. "When the bench is installed, we wanted to invite people for that installation. We'd like to have some type of celebration to invite people to come to the installation. I actually asked SF Pride if they'd like to be involved in the fundraiser ... but they didn't respond."

After the initial publication of this story on the afternoon of January 25, Moses stated to the B.A.R. that SF Pride did respond and is helping to promote the fundraiser. As of the next morning, SF Pride had not responded to the B.A.R.

Updated, 1/26/22: This article has been updated to indicate SF Pride is helping to promote the fundraiser.

Pride 2018: After TV spotlight, Ken Jones reflects on his activism
Sign up!