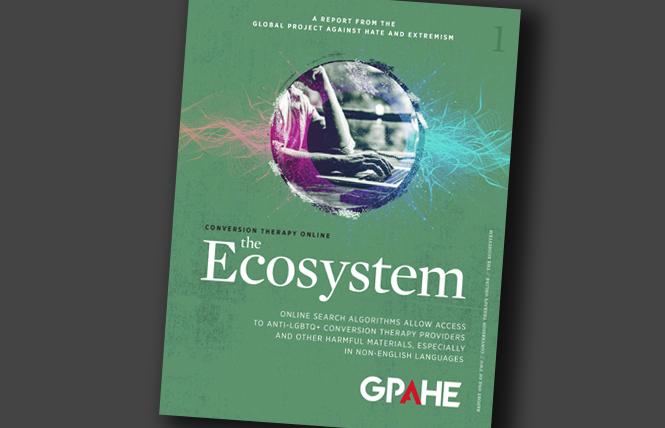 The Global Project Against Hate and Extremism has released reports on disinformation available online about conversion therapy. Photo: Courtesy GPAHE

As we reported January 13 online, the Ecosystem report found the internet is filled with disinformation, especially in languages other than English. It looked at Alphabet Inc.'s Google and YouTube; Meta's Facebook and Instagram; Twitter; Microsoft's Bing; and Amazon's Silk and Alexa.

The Players report profiles 25 conversion therapy providers around the world that the researchers identified as the most prominent, but it is far from exhaustive, Heidi Beirich, Ph.D., and Wendy Via cautioned. They identified three interconnected groups operating around the world within the network. The Alliance for Therapeutic Choice, Scientific Integrity is largely made up of American practitioners, but they practice their "therapy" in other countries and collaborate abroad. Northern Ireland-based organization Core Issues Trust has several partners in the United Kingdom and throughout Europe.

Wayne Besen, founder of Truth Wins Out, which fights anti-LGBTQ religious extremism, also wrote about the GPAHE reports. In a January 18 Substack piece, he praised the reports but doubted that the tech companies examined would do much beyond the bare minimum. "Sure, these corporations have taken baby steps to scrub their sites of conversion pseudoscience. But Silicon Valley is going about protecting LGBTQ people in the same way they are promising to safeguard democracy: Half-hearted and half-assed," he wrote.

In fact, Google was the only company that responded to our request for comment and even then the unnamed spokesperson didn't talk about specifics. "We design our search ranking systems to prioritize high-quality information, especially for important topics like health," a company spokesperson wrote, "which have 'shown that our approach is effective.'"

Unfortunately, Google's approach is not good enough. Besen is right when he wrote that the tech companies could eliminate the vast majority of conversion therapy material online very quickly. The problem in their eyes likely is the fact that they have created business models "based on keeping people engaged by keeping them enraged," Besen wrote.

All of these companies must do more to eliminate the disinformation. Conversion therapy is bunk (one cannot engineer another person's sexual orientation or gender identity). Even a number of so-called ex-gay people have come out and said they don't believe it works; many practitioners are LGBTQ themselves, as is shown in the Netflix documentary "Pray Away." The companies should redouble their efforts to refine their search algorithms in order to root out disinformation. As the Ecosystem report noted, "recommendation algorithms on Facebook and Twitter continue to lead users down a dangerous conversion therapy rabbit hole once they land on a provider. However, the initial search mechanisms generally don't show a user to providers."

Twenty U.S. states (including California) and the District of Columbia have banned conversion therapy for minors. France and Canada have banned the practice too — in Canada's case it is also prohibited for adults. But disinformation remains rampant, especially in non-English countries and languages like Swahili in Kenya, the reports stated. African countries have also welcomed U.S. conversion therapy peddlers over the years. One of the problems now is that since the term "conversion therapy" is often flagged, other terms have cropped up online and continue to push people toward the disinformation, especially in non-English languages.

The tech giants have been criticized for fostering disinformation about a lot of things — the 2020 election conspiracies, COVID-19 and vaccine disinformation, and much more. Like misinformation about conversion therapy, these rabbit holes can be dangerous — even deadly. For conversion therapy, it's often young people who are preyed upon. It's time for the GPAHE reports to get a wider audience, particularly with the leaders of tech and social media companies, and for these executives to do more than pay lip service to rooting out the bogus, harmful claims that proliferate online.