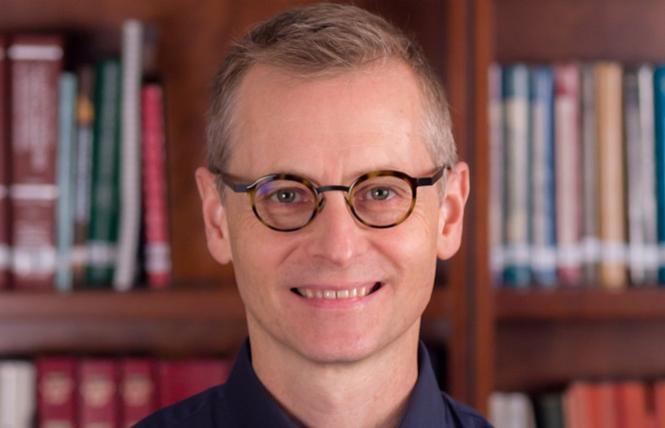 Brian Custer, Ph.D., of Vitalant hopes to enroll more gay and bi men from the Bay Area in a blood study his company is conducting. Photo: Courtesy Vitalant

A pilot study that could lead to changes in federal rules prohibiting sexually active men who have sex with men from donating blood is seeking 200 more participants in the Bay Area before July. The study is called the ADVANCE Study, which stands for Assessing Donor Variability And New Concepts in Eligibility.

The study comes as the American Red Cross declared a blood supply shortage January 11 and as 22 U.S. senators sent a letter to Xavier Becerra, the secretary of the Department of Health and Human Services, and Dr. Janet Woodcock, the acting commissioner of the Food and Drug Administration, asking them to scrap decades of restrictions on gay and bisexual men donating blood.

As the Bay Area Reporter has reported, in 1983 due to the AIDS epidemic, the FDA imposed a lifetime ban on blood donations by men who'd had sex with men since 1977. Under the Obama administration this was changed to a ban on men who'd had sex with a man in the past 12 months; and under the Trump administration amid a blood shortage caused by the COVID-19 pandemic, this period was reduced to three months.

Brian Custer, Ph.D., a gay man who is a vice president of research and scientific programs at Vitalant, said that the blood donation nonprofit is conducting a study in eight cities that will be presented to the FDA in early 2023. Custer said he hopes the study's results will guide the federal agency to consider changing questions about men who have sex with men specifically to questions about sexual health and safety across all orientations.

Custer said that the study is going to look into whether questions about the number of one's sexual partners, for example, might be a good replacement.

"Questions like that would create an individual risk data set in the future," he said. "The thing is one or two questions might differentiate gay and bisexual men at risk of getting HIV and those who aren't, and if we can do that, we may be able to achieve changes in the future."

There are two places in the Bay Area where people who want to give a blood sample for the study can go: the Vitalant Blood Center at Turk and Masonic streets in San Francisco, and American Red Cross Blood Services at 6230 Claremont Avenue in Oakland.

"We ask people to schedule an appointment online," Custer said.

Enrollment will continue until July. Only HIV-negative men who have sex with men should sign up for the study, which is limited to people ages 18-39.

"Enrollment has been slower than we'd hoped it'd be," Custer said. "The COVID pandemic has made people less likely to be part of research studies, for obvious reasons."

Custer said that "people are compensated for their time and reimbursed for being part of the project." A person can earn $10 from a screening interview, up to $25 if they are enrolled, and up to $50 if they get their results. Payment will be made via gift card or Zell.

"We urge the Food and Drug Administration (FDA) to quickly act on the best available science and update its outdated and discriminatory blood donor deferral policies for men who have sex with men (MSM), a long overdue step that would dramatically increase the eligible donor base," the letter states. "Any policy that continues to categorically single out the LGBTQ+ community is discriminatory and wrong. Given advances in blood screening and safety technology, a time-based policy for gay and bisexual men is not scientifically sound, continues to effectively exclude an entire group of people, and does not meet the urgent demands of the moment."

The letter notes that other countries such as Israel and Canada have changed their screening questions regarding sexual orientation.

"In light of the nation's urgent blood supply crisis and to ensure that Americans have access to life-saving blood transfusions during the pandemic, we urge you to swiftly update your current blood donor deferral policies in favor of ones that are grounded in science, based on individualized risk factors, and allow all potentially eligible donors to do so free of stigma," the letter states. "We also request a briefing in the next 30 days on the agency's plan to update its MSM blood donation policies."

Bisexual Senator Kyrsten Sinema (D-Arizona), the only other LGBTQ member of the upper congressional chamber, is not listed among the signatories.

The Human Rights Campaign stated its support for the letter and policy changes.

"Every two seconds, someone in the U.S. needs a blood transfusion to survive. But right now, the FDA continues to use archaic, discriminatory criteria to determine an individual's eligibility to donate blood based solely on their sexual orientation — not their individual risk factors — which is not rooted in science, limits access to crucial blood products, and stigmatizes one segment of society," David Stacy, the government affairs director of the HRC, stated in a news release.

"The FDA instead should focus its considerations for blood donor deferrals based on risky behavior by any potential donor, regardless of one's sexual orientation. This would both best ensure a safe blood supply and maximize the pool of blood donors. We thank Senator Baldwin and her colleagues for their leadership on this issue," Stacy added.

To set up an appointment for the Vitalant blood study, click here.