Guest Opinion: 'Know Our Place:' The wrong subtext for the Transgender District 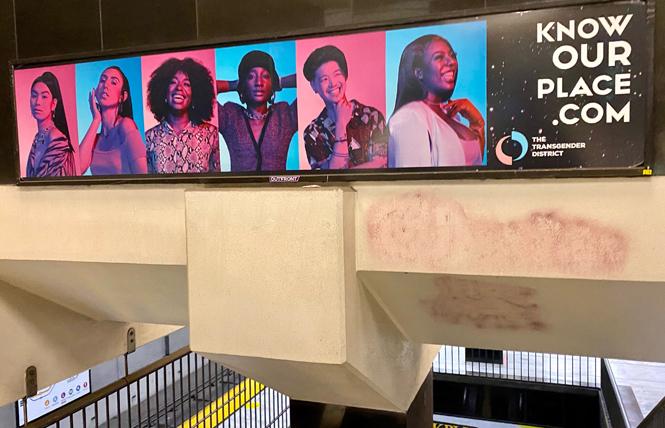 One of the "Know Our Place" billboards is visible at the Civic Center BART Station. Photo: Adriana Roberts

As a 30-year resident of San Francisco — who is also a transgender woman — I was elated when I first saw, in 2017, that the city had designated an official and legally-recognized Transgender District, centered at Turk and Taylor streets. That's the site of the landmark 1966 Compton's Cafeteria riot, which predated the Stonewall riots by three years, and is slowly being recognized as the first documented uprising of transgender and queer people in United States history.

This newly-christened district stretches along a six-block sliver of the Tenderloin, and includes two blighted blocks of Sixth Street as well. As most everyone knows, it's not exactly the best neighborhood, plagued with poverty, drugs, and crime. But this is where an important piece of queer history took place, and it deserves to be recognized. It's also one of the last places in San Francisco that seems to have avoided gentrification. For me, it's home.

About a year ago, I started seeing sharp-looking pink, pale blue, and black banners around the neighborhood, featuring young, attractive transgender models. In the Civic Center BART Station, there are billboards proclaiming this area as the Transgender District, and prominently featuring the headline, "Know Our Place." At first I was excited, thinking "Yay! Recognition! Validation! Represent!" After all, not only was this a public awareness advertising campaign celebrating my own neighborhood, but there was also a sense of pride and recognition in seeing my fellow trans sisters and siblings featured on big public displays.

Despite the obvious good intentions of the ads though, I have to admit that something about them bugged me; however, I couldn't quite articulate what it was. In fact, it took me months to process why this campaign ultimately bothered me, and it was only after the repetition of multiple impressions in the BART station that I slowly realized the flaws in its messaging, which now seem misguided, or, dare I say: "problematic?"

Let's start with the questionable tagline: "Know Our Place," a play on the derogatory put-down, "know your place." As in, "be aware of your class status, and don't even bother trying to rise above your station." Even though the slogan is meant to encourage people to explore the Transgender District, the implied subtext of the wordplay sadly has the unintended consequence of reinforcing the stereotype that transgender people are of a lower social class and only belong in economically-depressed neighborhoods such as the Tenderloin. While I'm sure this wasn't the intent of the copywriter, it is the unfortunate result.

Secondly, seeing as that the formation of the Transgender District was spearheaded by three Black trans women, the inclusion of POC, API, and Latinx models is not only laudable, but to be expected. However, the notable exclusion of any Caucasian trans person sadly has yet another unintended side effect: it subconsciously implies — especially to a white, cis-het audience — that this neighborhood is only a ghetto for young, non-white trans women (with almost no trans men, at that), perpetuating and reinforcing mainstream society's perception of trans people's "otherness," rather than encouraging integration.

As a white trans woman, I understand the privilege I have that was probably not afforded to the models in the ad but worry that by only featuring young, beautiful, non-white models, an opportunity for diverse intersectionality was lost. (Also, if we're going to feature transgender tropes, where's the coder with colored hair, cat ears, glasses, and piercings? According to all the trans memes, that's literally the "trans girl starter pack." But that's a topic for another article.)

Overall, the "Know Our Place" campaign obviously wants to build awareness for the Transgender District, but sadly misses the mark in conveying an overtly positive message to its intended audience. At first, this seems to be the result of a campaign like this being developed by an outside marketing team, without deep-rooted ties to the neighborhood. But in fact, this is not the case. The Transgender District campaign was entirely conceptualized by an all-transgender and gender-nonconforming team. It is interesting to note, however, that most, if not all, of the models are not even residents of the district itself, lending a disconnect to the following hyperbole on its website, which states: "so we invite you to our place, to see us grow beyond the ideas of what we are outlined to be." Which is a strange thing to say when the model bios state that they're from Oakland, or the Mission, or "the Bay Area." Do any of these people actually even live in the Transgender District?

Overall, while I applaud the fact that an ad campaign like this even exists on such a public scale, I worry that the messaging — despite its obvious good intentions — misses its target. It continues to reinforce outdated stereotypes about the transgender community. Simply put, the negative issues of the subtext are just way too deeply-rooted in cis-het normie society, which, as progressive as San Francisco is, are still sadly alive and well in 2022.

As a performer, DJ, and producer of the long-running Bootie Mashup parties, Adriana Roberts has been helping shape nightlife culture in San Francisco since moving to the city in 1991. She is also a former art director of the Bay Area Reporter. This piece expands on a Facebook post Roberts initially wrote on the topic.