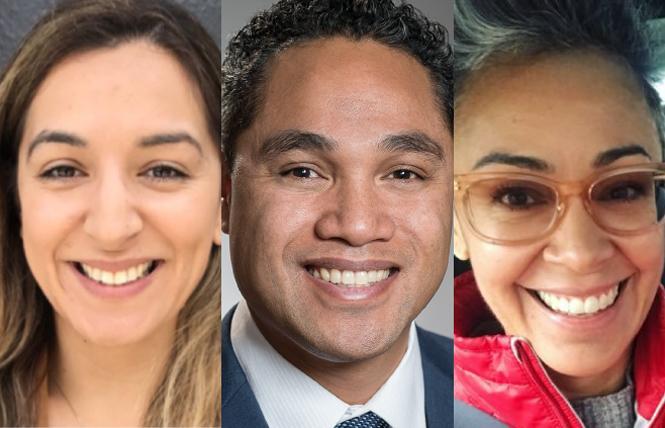 The San Francisco school board has largely made a mockery of itself for a year now. With the COVID-19 pandemic about to enter its third year, trustees spent valuable time on matters that should have been postponed. Its stubbornness in proceeding with an ill-timed vote to rename 44 public schools — only to rescind that vote later — is just one of the many head-scratching moves the commissioners have made. In that debacle, proper research wasn't even done on the names of historical figures being considered for removal from the schools. Board President Gabriela López, and Commissioners Faauuga Moliga and Alison Collins face a recall vote February 15. We recommend that all three be removed. Collins, in particular, has displayed zero integrity, starting with her refusal to apologize for racist tweets she wrote before being elected. The board last year did strip Collins of the vice presidency and committees; she retaliated by suing her own district and board colleagues for $87 million. That lawsuit was dismissed and then Collins withdrew it, but not before the district incurred some $110,000 in legal costs. This at a time when the district is facing a budget deficit of about $125 million. (A favorable court ruling may provide millions from the Proposition G fight over educator pay, but it's unclear when that will be sorted out. Another ballot measure, Prop J, was passed by voters and replaced Prop G.)

All three commissioners were uninterested in appointing a gay dad, Seth Brenzel, to the district's volunteer Parent Advisory Council, even though he was qualified and the council had no LGBTQ or male members at the time. While the board tabled the matter rather than vote on it, it was clear that there was little interest in a gay white man serving on the PAC even though it had several vacancies and lacked diversity as it relates to gender and the queer community.

Some leaders have urged people to vote to recall López and Collins, while taking no position on Moliga. And to his credit, Moliga has at least been fighting for his seat through online writings, op-eds, and social media. But at this point, with months of negative headlines, especially over the board's slow pace of reopening schools, we doubt many voters will make that distinction.

Should the commissioners be recalled, Mayor London Breed would be able to appoint their replacements, and they would have to run in November to remain on the board. It's time to have San Francisco Board of Education commissioners who can commit to diversity — in all its forms — and to prioritize the district's students and staff and balance its budget over issues like school renaming.