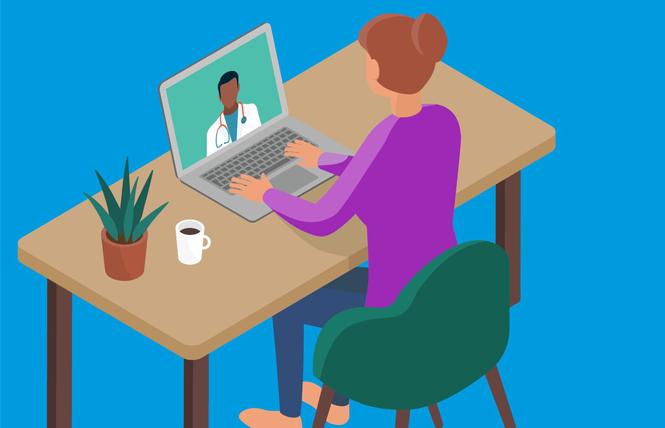 San Francisco is set to launch an innovative LGBTQ senior telehealth program this year, as mental health issues among the city's older LGBTQ adults have only increased due to the ongoing COVID-19 pandemic. It is believed to be the first of its kind in the country funded by a city.

The city allocated $600,000 for the LGBTQ senior telehealth program in the current fiscal year budget that began July 1. There is $250,000 for the telehealth/mental health component and $350,000 for the complementary technology support and connections program.

While a request for proposals from local providers was expected to be issued in 2021, it is now set to go out sometime this month. Mike Zaugg, director of the Office of Community Partnerships within the city's Department of Disability and Aging Services, noted in an emailed reply this week that his team is "hustling to get this RFP out ASAP."

LGBTQ senior advocates and officials with the Curry Senior Center had lobbied city officials last spring to set aside funds for launching the program. The nonprofit provider of senior services plans to submit a proposal for the funds in order to launch it, as health care officials at all levels have embraced telehealth platforms due to the ongoing pandemic making it difficult to provide in-person services.

"I am not aware of any specific city-funded programs specifically like this one," Toby Shorts, a gay man who is the nonprofit's senior center director, told the Bay Area Reporter. "The federal government and everyone else has relaxed restrictions on telehealth. Most of us are moving into that arena as a matter of necessity."

As the B.A.R. reported in August, a local survey provided evidence to what mental health care providers were seeing anecdotally, that the pandemic had exacerbated the isolation and loneliness many queer elders had already been struggling with for years prior to the emergence of COVID-19 in March 2020. Nearly 8% of the 500 LGBTQ respondents over the age of 50 reported seriously thinking about committing suicide in the past 12 months.

Nearly 65% reported feeling lonelier than before the pandemic began. Over 80% said they felt isolated from others, with almost 40% saying they often felt isolated.

During the first year of the pandemic, 29% who wanted to receive mental health services via appointments over the phone or video (telehealth) were able to get them. Another 14% said they wanted such telehealth services but could not get them.

Mental health counseling was the highest unmet need — at almost 17% of all respondents — that the survey found. In late 2020 the Curry Senior Center had hired a consultant to design what a telehealth program for LGBTQ seniors would look like.

"When the pandemic started, we recognized that our LGBTQ+ older adults were having a different experience than just the population as a whole. But we had to limit what we could do onsite," recalled Shorts. "The survey showed support for what we are doing; that is fantastic."

His agency received a grant from Horizons Foundation that paid for tablets given to LGBTQ older adults so they could safely access the Curry center's services from home. It allowed them to connect with their counselor or therapist remotely.

"We have served the LGBTQ+ older adult population for a very long time. Being in the Tenderloin has meant we are close at hand with that population," said Shorts, noting that Curry has long worked with LGBTQ nonprofits like Openhouse and Shanti Project.

Should Curry, which turns 50 this July and is named after former city health director Dr. Francis J. Curry, be granted the city funds, it hopes to launch the program early this year. It also plans to convene an advisory panel of LGBTQ older adults to offer guidance on the program.

The Curry center received $30,000 to help design its proposed program from the Metta Fund, the California Health Care Foundation, and Horizons. East Bay-based licensed marriage and family therapist Jay Louie, who is transgender fluid, was hired to help design the pilot program.

Report findings
Their 34-page report was based on interviews with various local LGBTQ service providers and older adults. Louie also determined that "the pandemic exacerbated acute and chronic mental health symptoms in LGBTQ+ older adults," and a program specifically focused on such a cohort of clients was needed.

As one 63-year-old Black trans woman told Louie, "If I want to go to mental health providers, I don't have the luxury of going to doctors who are familiar with transgender women or men. I'm stuck going to straight communities, straight doctors, people who are not viewing me in what I want."

In an interview with the B.A.R. Louie said they were unaware of any telehealth programs focused on LGBTQ seniors pre-pandemic.

"There may be ones that have sprung up, as everyone had to seriously consider telehealth in order to maintain their programs during shelter-in-place," noted Louie.

Compared to a program for straight seniors, one aimed at LGBTQ seniors needs to take into account their basic safety and trust, said Louie, as they are more likely to have experienced discrimination in health care settings during their lifetimes.

"Those things are very different for LGBTQ+ older adults," they said. "The experience of older adults that are LGBTQ and from racial minority groups is different. Honoring those differences is really important. Also, in terms of acknowledging how the HIV epidemic had impacted those communities is very different than in heteronormative spaces for older adults."

Louie estimated at least $388,850 would be needed for a 12-month-long program, especially in order to properly compensate the therapists hired to staff it. The program could also offer individual sessions, groups, or a combination of the two to clients.

"Instead of looking at this as a challenge, we can leverage tech for cost savings and meet their need for connection," Louie said.

Such a program can easily be launched in other cities, Louie told the B.A.R., though they acknowledged doing so might be easier in some states and not others.