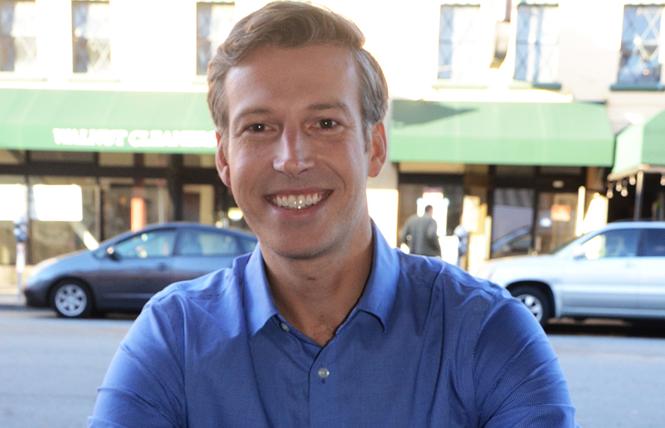 Due to the oddly-shaped congressional district that Palm Springs has been drawn into, the LGBTQ retirement and tourist mecca could see it be represented by a gay former federal prosecutor come 2023. The result of the decennial redistricting process means the fight for California's new 41st Congressional District is likely to draw national LGBTQ interest.

Will Rollins still faces an uphill climb as a relatively unknown Democratic candidate in winning the Southern California House seat. He and several other Democrats will be facing off against conservative Congressmember Ken Calvert (R-Corona), who currently represents the 42nd Congressional District.

As currently drawn, Calvert's district largely follows Interstate 15 from Murrieta north to Corona. It branches off to the east to include Canyon Lake, where Rollins lives with his partner, and other Riverside County towns such as Menifee, Winchester, and Nuevo.

The new CD 41 map still runs along I-15 but starts farther north in Wildomar and stretches farther east to include Palm Springs, Rancho Mirage, Palm Desert, Indian Wells, and La Quinta in the Coachella Valley. Cathedral City, however, is carved out of the district and is in the 25th Congressional District.

Rollins' campaign hasn't wasted any time in ballyhooing the changed map. In one email it sent out last week, it noted the district has now shifted seven points in Democrats' favor making it "officially a swing seat!" Yet the Cook Political Report rated it as "Likely Republican," giving Calvert the edge in keeping it in GOP hands.

When Rollins spoke to the Bay Area Reporter in mid-November while he was in town for a fundraiser hosted by friends, he said he was "very excited" about the prospect of potentially representing the Palm Springs area in the House. It is about an hour drive from his home he shares with his partner, Paolo Benvenuto, a user experience designer for Google.

"It would be an honor to do that," said Rollins, 37, who graduated from Dartmouth and Columbia Law School and, until last year, had worked as an assistant U.S. attorney. "The best part about it is knowing I share the same values as the people who live in Palm Springs."

Even before the district map changed, Rollins was making Calvert's dismal record on LGBTQ rights an issue. In 2020, Calvert earned a 10% on LGBTQ statewide advocacy organization Equality California's federal scorecard. (EQCA has yet to release its 2021 scorecard.)

Meanwhile, the conservative Heritage Action for America has rated Calvert at 96% so far during the current congressional session. He has a lifetime score of 60% from the GOP-aligned think tank.

Yet, when asked recently by the Desert Sun about his anti-LGBTQ voting record, which includes opposing the federal Equality Act and repeal of the military's homophobic "Don't Ask, Don't Tell" policy, Calvert contended he supports treating "all people" equally.

"I've never believed in any kind of prejudice or discrimination against any group of people, whether they're gay or Black or Hispanic, and the laws in our country should reflect that," he told the newspaper.

Rollins was quick to charge Calvert with lying about his record, telling his supporters in an email last week that he had "to call BS on" the 28-year congressmember's response to the Sun. In speaking to the B.A.R., Rollins said of his seeking to oust Calvert, "I look at it as a privilege to run against someone like that."

Calvert's stance regarding LGBTQ military members being able to serve openly harmed the country's defense, said Rollins. And by fighting against the rights of LGBTQ Americans, Calvert is hurting all Americans, Rollins argued.

"We don't talk enough about how discrimination hurts the country as a whole," Rollins told the B.A.R.

A driving force for Rollins to give up his federal legal career, in which he had been focused on counterterrorism cases, and mount a bid for Congress was Calvert's vote last January 6 against certifying the 2020 presidential election results. In doing so, he helped to propagate former President Donald Trump's "big lie" that he should have been declared the winner rather than President Joe Biden, Rollins contended.

"A guy like that is not qualified to hold office, in my opinion," said Rollins.

Long Beach Mayor Robert Garcia could become the first gay Latino to represent California in the House. He is seeking the new 42nd Congressional District that is majority Latino.

Also seeking the open seat that includes a number of southwestern Los Angeles County cities is Assemblymember Cristina Garcia (D-Bell Gardens). Both of the current congressmembers who ended up in the new district, Alan Lowenthal (D-Long Beach) and Lucille Roybal-Allard (D-Downey), decided not to seek reelection this year.

But Rocha announced January 4 that he was suspending his House candidacy and would instead run for state Senate against Senator Brian Jones (R-Santee) in the newly drawn 40th Senate District.

Along the West Coast, there are two other out House candidates in Oregon who are seen as mounting viable campaigns. Lesbian former Santa Clara city councilmember Jamie McLeod-Skinner is making her second attempt to win a congressional seat from the Beaver State, while former San Francisco resident Kevin Easton is the first openly gay man to run for Congress in Oregon.

The three-state West Coast region could go from having Takano as its lone current LGBTQ congressional member to seeing its out representation in the House grow at least five-fold come 2023 depending on how the quintet of out House candidates does this year.

Rollins told the B.A.R. he believes he has a strong chance of surviving California's June 7 primary, where the top two voter-getters advance to the November election. Also seeking the House seat are fellow Democrats engineer Shrina Kurani and teacher Brandon Mosely.

Rollins grew up in Temecula, which was drawn out of the new House district. His mother is a public defender and his father is a journalist.

In the late 2000s Rollins worked for a law firm in San Francisco one summer and attended his first Pride parade in the city in 2009, a year after he came out of the closet at age 24.

He served as an assistant press secretary for former Governor Arnold Schwarzenegger. Rollins also was a judicial law clerk at a U.S. District Court for Central California then at the 9th Circuit U.S. Court of Appeals until he joined the U.S. Department of Justice in September 2016.

After first working on white-collar criminal cases, Rollins joined the Terrorism and Export Crimes Section of the National Security Division. He handled cases that involved a Chinese spy, Iranians who violated U.S. sanctions, and some of the Trump supporters who attacked the U.S. Capitol last January 6.

He has not shied away from talking about his experience as a gay man on the campaign trail, highlighting it since first announcing his candidacy last year. Photos of him and Benvenuto are prominently featured on his campaign site at https://willrollinsforcongress.com/, while Benvenuto recently emailed out a fundraising pitch on his partner's behalf under the subject line "So proud of Will."

"It is an honor to follow in the footsteps of gay leaders who have made my life better and I hope to continue to build on that legacy," said Rollins. "When more doors open to LGBT Americans, the country overall does better. It is a message I will keep talking about on the campaign trail."

Rollins will be discussing the January 6 attack on the Capitol on its anniversary Thursday during a virtual event at 5:30 p.m. To register, click here.