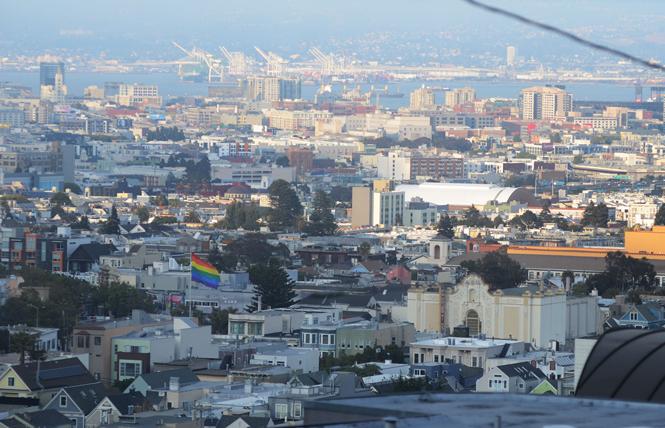 San Francisco department heads should request some of the budget surplus for staff and programs aiding the LGBTQ community. Photo: Rick Gerharter

There was some good news from the city last month when Mayor London Breed announced that for the first time since 1998, San Francisco is projecting a budget surplus for the next two years. As the Board of Supervisors and city departments prepare for the budget process for Fiscal years 2022-23 and 2023-24, we recommend that some of the surplus funds be budgeted for programs and staff serving the LGBTQ community, particularly as the city begins its recovery from the COVID-19 pandemic, although that will likely be an ongoing part of life for the foreseeable future.

The city's annual general fund is approximately $6 billion. According to a news release, there is a projected $108 million surplus that results from a mix of three sources: revenue improvements, record returns to the city's pension program, and responsible budget decisions over the last two years. Stronger revenues included local taxes like property and transfer taxes, federal funding through the Federal Emergency Management Agency reimbursements, and the American Rescue Plan, which was enacted by Congress and signed by President Joe Biden last year. The returns to the city's pension program will help reduce San Francisco's obligations over the next four-year period and beyond. Finally, constraining cost growth included focusing on one-time investments during the difficult budgets of the pandemic to prevent long-term obligations. The city still has a projected budget deficit in years three and four of the long-term financial projection, according to the mayor's press release.

In her budget instructions to city departments, Breed has requested that they continue decisions that have helped the city avoid a deficit for the first time in 20 years. Breed has asked departments to get "back to basics" and focus on better service delivery. Departments are not being asked to make any proposed cuts, as has been the case in prior years, but instead to reprioritize existing funding toward programs and services that will deliver results and meet the top priorities of the city. The release states that in addition to spending on homelessness, mental health, and anti-poverty programs like the Dreamkeeper Initiative, the mayor's priorities are: restoring the vibrancy of the city, including improving public safety and street conditions; focusing on economic recovery; and delivering on accountability and equity in city spending.

It's this equity priority that we'd like to focus on with our suggestions.

Hiring staff for planning dept.
The planning department should budget for a staff position that would be solely tasked with landmarking city properties, particularly those of historic significance to the LGBTQ community and communities of color. There is reportedly a huge backlog because the department doesn't have the staff to work on this. Landmarking various properties not only provides historical context for their importance, it also offers some protections at a time when gentrification remains a pressing issue in the city. Last year the city landmarked the Eagle Bar in the South of Market neighborhood and the Noe Valley home of late lesbian pioneers Del Martin and Phyllis Lyon, but only because Supervisors Matt Haney and Rafael Mandelman introduced ordinances that forced planners to work on the landmarks. Both of these properties are significant to LGBTQ history, as are the other landmarks that have been approved over the years. In 2022, we will likely see a push to landmark the flagpole at Castro and Market streets. Having a staff person devoted to the necessary reports and other information is critical if various properties are to be acknowledged.

Hiring staff for trans office
The Office of Transgender Initiatives has done critical work with a barebones staff, and we recommend at least one additional position. In the past, the mayor has asked that the office also work on LGB projects in addition to those focused on the trans community, so in our opinion additional staff are needed since the scope of the office has increased. In addition, the city should increase funding for trans housing. Last year the budget included $4 million over two years for trans and HIV housing subsidies. The need for these subsidies remains high, as does money for Our Trans Home SF, which is a mix of rental subsidies and case management for trans clients. Last year's budget kept funding flat for Our Trans Home — with the projected surplus, it seems an increase in the budget could help more people. Sherilyn Adams, the executive director of Larkin Street Youth Services, which has the contract for the Our Trans Home rental subsidies, told us during last year's budget process that more subsidies are needed. "Housing assistance for trans folks is life-saving," she said at the time. As we have reported for years, trans and gender-nonconforming and HIV-positive people face higher rates of housing insecurity and health disparities.

LGBTQ Cultural Heritage Strategy report
The Board of Supervisors has yet to hold a hearing on the city's groundbreaking LGBTQ Cultural Heritage Strategy report. We reported last January that Mandelman, the board's lone LGBTQ member, expected to call for a hearing in 2021. That did not happen. The 56-page report was first released in draft form in 2018 and was published with revisions in 2020. "Other than being taken up by the city's historic preservation commission in the fall of 2018, there has yet to be a public hearing about the final version of the strategy before any city oversight panels or a supervisors' committee," we reported a year ago.

There are 50 proposals in the report that would cost an estimated $10.2 to $15.7 million to implement. The report noted that 23 of the listed initiatives have received some sort of funding to get underway. With the projected budget surplus, this is the year to make sure the funding is in place for these initiatives.

Planning department director Rich Hillis and Office of Transgender Initiatives acting director Pau Crego should approach the coming budget session with an eye toward requesting additional funding that ties in with the mayor's own goal of equity in city spending. The proposals we've outlined above could also aid in the city's economic recovery and deliver on accountability, especially in the case of housing aid for trans and HIV-positive people. Given the good news regarding the budget, it's time for the city to deliver in these areas for the LGBTQ community.