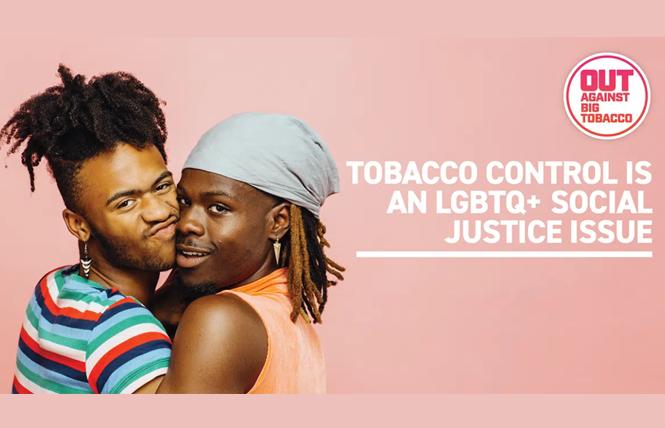 While smoking rates have declined nationally in the past 20 years, this reduction has not been shared equally among Black, Indigenous, and people of color (BIPOC) communities or the LGBTQ+ community — and especially among those with intersecting identities. Tobacco is one of many harmful coping mechanisms that are adopted disproportionately by the LGBTQ+ community due to discrimination. Research shows that intense amounts of discrimination is linked to increased risk of tobacco use. This is no coincidence.

The LGBTQ+ community is unique because people of all ages, races, and religions can identify as LGBTQ+. Issues that affect one community, such as the increased risk of tobacco use for Black communities, also impacts Black LGBTQ+ folks at even higher rates. In fact, research has shown that Black lesbian, gay and bisexual youth are 225% more likely to smoke than heterosexual Black youth.

While many cisgender heterosexual BIPOC folks can rely on their tight-knit communities as a support system, LGBTQ+ BIPOC people are often disowned by their biological family and wider community because of their LGBTQ+ identities. These added stressors caused by the lived experiences of LGBTQ+ people are associated with a higher risk of tobacco.

Big Tobacco has used flavors, like menthol, to cover up the harsh taste of tobacco, which makes it easier to get hooked and harder to quit. Candy, fruit, and dessert flavors are attractive to young people, getting them hooked on nicotine from a dangerously young age. Big Tobacco's marketing strategy has targeted LGBTQ+ people resulting in an overwhelming presence of tobacco products in LGBTQ+ spaces, clubs, bars, Pride events, etc.

OUT Against Big Tobacco Los Angeles, a coalition supported by Equality California Institute, is working in Santa Monica to educate the community and policymakers on the impacts of flavored tobacco - and coupons and discounts on tobacco purchases - on the LGBTQ+ community. Santa Monica, which has a history of passing tobacco control policies, has the unique opportunity to create a healthy and safe environment for its residents, including youth.

Research has shown that flavored tobacco increases people's risk of becoming addicted to nicotine; because youth are most likely to begin smoking with flavored tobacco, youth can especially be at risk for becoming addicted due to these products. The city of Santa Monica passed an outdoor smoking ordinance at the Pier, citing its danger and risk of secondhand smoke exposure to youth and tourists. As the pandemic has continued, so have stressors for the LGBTQ+ community and BIPOC youth. More now than ever, community action based on research is needed to prevent more people from becoming addicted to nicotine.

To add to the many stressors LGBTQ+ folks deal with, the past year has resulted in many LGBTQ+ people facing increased risk of social isolation and depression. Due to COVID-19, various support groups that the community often relied on outside of their biological family such as school, Gender and Sexuality Alliances (GSAs) or Pride clubs, were no longer available to gather in-person. This lack of in-person support has created room for online influences to now hold even more weight than they previously did. As we reopen, the long-term effects of isolation on youth remain to be seen.

Further research is needed to fully understand the impacts that the pandemic and subsequent social isolation has had on smoking rates for LGBTQ+ youth, especially those of color. It's likely that more LGBTQ+ young people will come out of this pandemic addicted to tobacco. The onus is on institutions to ensure equitable access to resources to quit. Big Tobacco must be prevented, once and for all, from targeting our youth.

Ryan Oda (he/him) is a program associate for Equality California Institute's OUT Against Big Tobacco Program, where he is working to reduce LGBTQ+ tobacco use throughout Los Angeles County. To find out more about how to get involved in tobacco control work, check out OUT Against Big Tobacco's Twitter: @outtobacco and Facebook: @OUTAgainstBigTobaccoCoalition. For help quitting, check out Kick It California.