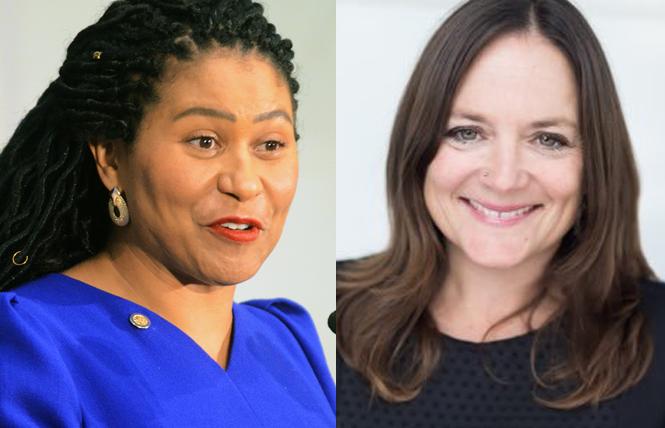 The San Francisco Board of Supervisors did the right thing by approving Mayor London Breed's state of emergency declaration in the Tenderloin. The marathon meeting started at 2 p.m. December 23 and ended some 10 hours later on Christmas Eve. The 8-2 board vote acknowledges that the situation in the Tenderloin has become untenable, especially for residents who call the neighborhood home, which includes many LGBTQ people, immigrants, and families with children. No one should be subjected to open-air drug dealing and people shooting up on the street. And those using drugs who are dying of overdoses at an alarming rate deserve the assistance that an emergency declaration will bring, namely, the opening of a linkage center. There was a lot of discussion at the special supervisors' meeting about police involvement, but as gay District 8 Supervisor Rafael Mandelman told us, the mayor's declaration is not about a heavier police presence, it's about providing services to people who desperately need it. "The police have asked for a long time for a place they can bring people to without taking them to jail," Mandelman, who voted to approve the declaration, told us December 27. "This was not weighing in on the mayor's police response. No neighborhood should have to tolerate what's happening in the Tenderloin." In fact, a smaller version of the problems in the Tenderloin is occurring in the Castro, Mandelman pointed out.

The plan calls for the hiring of 200 behavioral clinicians to fill current vacancies and allows the city to waive certain laws to quickly address the crisis of people dying of drug overdoses on the streets of the Tenderloin, according to a release from the mayor's office. Similar to the city's COVID-19 emergency declaration, the Tenderloin declaration will eliminate bureaucratic hurdles and allow the city to implement public health solutions relating to the health and safety of people living in the Tenderloin. "The Tenderloin needs change, and that requires us to do things different," Breed stated after the board's vote. The question remains what bureaucratic obstacles contributed to the current situation and what the criteria will be for getting people into treatment and decreasing the prevalence of drug use on city streets. The mayor's office told us that the declaration does not address what will happen if someone on the street refuses to leave. Police Chief William Scott stated at the board meeting that people "would not necessarily be arrested for declining drug treatment" and he doesn't support over-policing either. There will not be "an arrest tactic to clear the streets," he said. In fact, he pointed out that officers have saved nearly 300 lives by administering Narcan to people experiencing a drug overdose. What's unforeseen is how much change will occur, though it's clear that city officials are banking on most people being amenable to the linkage site. If past experience is any indication, there will be some people refusing help. That is something that should be addressed next month when the supervisors are expected to revisit the issue.

Key to the emergency declaration is the establishment of a linkage site. This is not to be confused with a supervised consumption site where people can use pre-obtained drugs under the observation of trained staff. (With the supervisors' approval, the city this month purchased property in the Tenderloin that could potentially be used for that purpose.) The linkage site would be a place where people using drugs on the street would be encouraged, or possibly required, to go, Mandelman explained. He acknowledged that some of his board colleagues are uncomfortable with the forcible removal of people from public spaces. However, he also told us that in his district "my constituents are really unhappy with conditions in the Castro." To be clear, Mandelman is not advocating for sending people to jail — "I don't want a return to mass incarceration or over-policing," he told us — but at the same time Tenderloin residents should not have to live with the current situation. The city's Department of Emergency Management will take the lead on getting the linkage site up and running — the approval of the emergency declaration means this can be done in three weeks instead of nine months. DEM Executive Director Mary Ellen Carroll stated that her department will now be able to cut through red tape and obtain the contracts, resources, and personnel to address the crisis condition in the Tenderloin. "It is important to be clear that this emergency declaration for the Tenderloin ... is by no means a way to criminalize drug use," she said at the board meeting. "The emergency declaration is essential to implementing key public health measures to assist with the Tenderloin response. The declaration allows us to meet this crisis with speed and efficiency."

Mandelman told us that he has "enormous faith" in Carroll and credited her with a good job on the Healthy Streets Operation Center. HSOC was established in 2018 and is a collaborative effort of multiple city departments. It also coordinates proactive responses to encampments and other hot spot areas, with the understanding that planned and collaborative outreach and engagement is more likely to successfully resolve issues, its website states. Carroll has also helped lead the city's COVID-19 response.

The Tenderloin response will be collaborative too — it has to be in order to make any lasting change. For instance, the Department of Public Health will be deeply involved in the process. Health Director Dr. Grant Colfax, a gay man, stated that he was grateful the Board of Supervisors approved the emergency declaration. He stated that DPH has evidence-based health tools to support people with mental health and substance use disorders. "The emergency declaration provides us with a critical opportunity to greatly expand our services and connect many more people to resources, care, treatment, and safety," he added.

We're relieved that the supervisors approved the emergency declaration with a solid majority. It's unfortunate that the situation has gotten to the point that it has, and we're now waiting for Breed and her department heads to truly speed things up and get help to those in the Tenderloin who need it, especially those living on the streets.