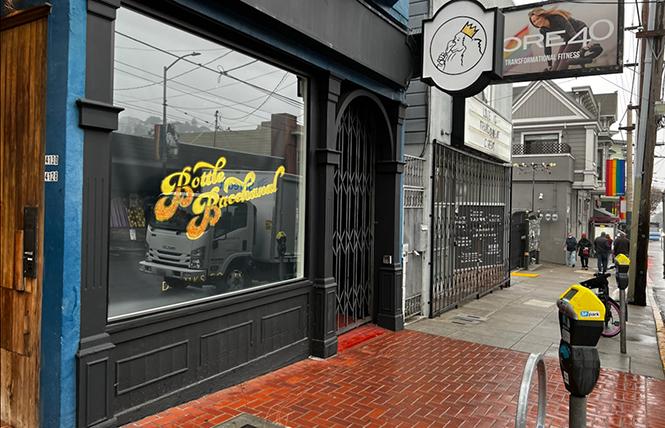 Under a proposed zoning change for bars, more than just wine shops would be allowed to open in the Castro. Photo: Matthew S. Bajko

The San Francisco Planning Commission has unanimously approved legislation that would allow additional bars in the Castro neighborhood, setting it up for a vote before the Board of Supervisors next month.

As the Bay Area Reporter previously reported, gay District 8 Supervisor Rafael Mandelman introduced the legislation October 19 after a prospective wine bar owner, Suzie Jennings, was told she could not open up in the Castro Street neighborhood commercial district, or NCD.

Jennings, a lesbian, had wanted the wine bar in the old Unionmade location at 493 Sanchez Street at the corner of 18th Street, but it appears that space will be utilized for another business.

Jacob Bintliff, a gay legislative aide to Mandelman, explained the situation to the planning commission during its virtual meeting December 16.

"Earlier this year, a local entrepreneur contacted our office about her vision of opening a wine bar with light snacks and piano music in the Castro," Bintliff said. "She was told it would not be possible. As it turns out, bars are not permitted in the Castro neighborhood commercial district. This may come as a surprise to any of you who have visited the Castro as there are a number of bars there, but in fact they are effectively grandfathered in."

New wine shops have been able to open, and several existing ones have added wine tasting on-site over the years. There are at least two on-site wine tasting locations in the Castro NCD, and another in the upper Market NCD.

Bottle Bacchanal is opening in January at 4126 18th Street. The woman-owned boutique shop — which plans to showcase artisanal liquors, craft beers and ciders made by women, Black, Brown, indigenous and LGBTQ+ producers — did not respond to a request for comment for this report.

According to Audrey Merlone, a senior legislative planner with the planning department, new bar sites have not been permitted in the Castro since 1987, when the Castro NCD was among the first created.

Bintliff said that the current rules are "a good thing for those [currently-existing] bars but it is not a good thing for this lesbian small business owner and others," and said that "queer folks, trans people, and people of color" are effectively sidelined from opening new establishments.

Bintliff also argued that allowing more bars in the Castro would alleviate the "high number of retail vacancies," as well as some of the effects of the COVID-19 pandemic lockdowns.

In reaching out to community stakeholders such as the Castro Merchants Association, as the B.A.R. previously reported, Mandelman "also heard a desire to not see a complete saturation of the neighborhood with bars," Bintliff said.

Indeed, Terry Asten Bennett, a straight ally who manages Cliff's Variety on Castro Street, said during a merchants meeting in September that she doesn't want the neighborhood to become too bar-centric, as it could erode over time daytime business in the commercial corridor if too many retail spaces are converted into nightlife venues.

The proposed legislation will change bars' status from not being permitted at all to being permitted conditionally. Thus, any new such business would need to seek a conditional use permit from the city's planning commission in order to open its doors, prompting a review process where the public could weigh in on the matter.

"This approach would be consistent with how bars are zoned in other neighborhoods of the city," Bintliff said.

Merlone said that the small business commission voted to approve the legislation December 13.

"The department is recommending the commission approve the new ordinance as drafted," Merlone said. "It will create new opportunities for vacant storefronts to become thriving businesses again."

No members of the public were in the phone queue for comment. The commissioners subsequently passed the legislation unanimously.

Bintliff told the B.A.R. that this legislation will go before the Board of Supervisors in January.

Mandelman told the B.A.R. December 21 that he's thankful his legislation is moving along.

"I'm grateful to the planning and small business commissioners for unanimously approving my ordinance to make the Castro more inclusive by giving new bars a chance to open," Mandelman said. "It isn't fair or good for the neighborhood to preclude new folks from starting a business, especially when those folks are queer women, trans people, and people of color."

Masood Samereie, a straight ally who is the head of the Castro Merchants Association, also issued a statement.

"We are pleased to hear the planning commission's decision. This opens the door for the responsible addition of new businesses to the Castro," Samereie stated. "Our hope is it helps to stimulate and encourage a new, diverse wave of entrepreneurs to open up shop in the neighborhood, occupying currently vacant storefronts."

Jennings, who owns the Spunk Salon on 19th Street at Collingwood Street, did not respond to multiple calls to the store. She was not present at the planning meeting.

The 493 Sanchez Street location is currently being renovated for use as a Pilates studio by Bright Star Pilates and Gyrotonic Studio, according to workers who said December 21 that they are renovating the floor for that purpose.

Subsequently, Bright Star Pilates and Gyrotonic Studio were contacted via email. Artemis Anderson, the owner, confirmed it is "hoping to be permanently located at 493 Sanchez Street" and it expects the floor to be completed January 3, "if all goes according to plan."

Stephen Torres, secretary of the Castro LGBTQ Cultural District board, expressed support for the proposed zoning changes in a statement to the B.A.R. late December 29. Torres stated the changes will help the Castro neighborhood become more diverse and inclusive.

"As a fundamental value and guiding principle, while focused on access to housing, jobs, and other opportunities, our board has unanimously committed to leave no one behind, particularly elders, youth, LGBTQ+ Black and Brown people, transgender and nonbinary people, and queer women," Torres stated in part. "In this spirit, we commend Supervisor Mandelman's office for its continuing efforts to address inequities in legislation and coding and are excited and hopeful at the prospect of more inclusive zoning changes."