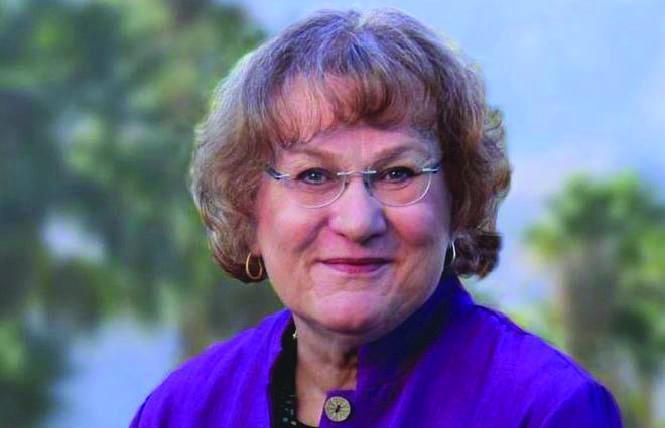 Palm Springs Mayor Lisa Middleton has suspended her campaign for state Senate after new district boundaries drawn by the redistricting commission created a seat that will not be up for election until 2024. Photo: Courtesy Lisa Middleton

Due to the state Senate seat she had planned to run for next year now not up for election until 2024, Palm Springs Mayor Lisa Middleton is suspending her campaign. She was aiming to become the first transgender person elected to the California Legislature next November.

Currently, Palm Springs is in the 28th Senate District but is set to be in the new 19th Senate District under the new maps, which will be finalized in mid-January. It means that state Senator Melissa Melendez (R-Lake Elsinore) can remain serving in her seat for two more years rather than being termed out in 2022.

In a statement December 22 reacting to the commission's decision, Middleton expressed her disappointment and said she would focus on her family and her duties leading her Coachella Valley city over the coming months. Earlier this month Middleton was elected by her council colleagues to serve a one-year term as mayor of Palm Springs, becoming the first transgender mayor in California's history.

"While I am disappointed in the independent redistricting commission's decision to defer the will of the people of the Coachella Valley in selecting their state senator until 2024, I remain excited to focus on my duties as Palm Springs' mayor, and finishing my full term on the City Council," stated Middleton.

She added, "I am looking forward to spending some time in the coming months to rest and reflect with my family. I want to thank all the individuals and organizations who supported my campaign, and I look forward to continuing to work with you to confront the critical issues facing our region and state."

Middleton, the first transgender person in California elected to a non-judicial position, had opted to sit out the special election for the open 28th Senate District seat last year. She instead ran for reelection to her City Council seat in the LGBTQ tourist and retirement mecca.

Melendez, then serving in the Assembly, won the seat, defeating several other candidates, including lesbian affordable housing advocate Joy Silver. A Democrat, Silver had come close to ousting Stone in 2018.

Melendez has reportedly been exploring a run for lieutenant governor in 2022. Due to the makeup of the state's electorate, she would face an uphill climb in winning the statewide office. Were she to pull off a victory, then she would depart the Legislature in January 2023, leading to a special election that year to fill her vacant Senate seat.

When, or if, Middleton revives her campaign for the Senate seat, she would likely continue to be seen as the frontrunner for it. She had launched her bid October 4 with endorsements from the Legislative LGBTQ Caucus and former United States Senator Barbara Boxer (D-California). Since then scores more elected officials and community leaders had endorsed her Senate candidacy.

"Over the past three months since I launched my campaign for state Senate, we've raised over six figures and amassed over two dozen endorsements from esteemed advocacy organizations, prominent statewide officials, and pioneering local leaders," noted Middleton in her announcement Wednesday.

Middleton lives with her wife, Cheryl O'Callaghan, and is a grandmother to a newly-born grandson. The couple moved to Palm Springs in 2011, and Middleton had served on the city's planning commission. Her election to a citywide council seat in 2017 was part of a wave of historic victories for transgender candidates across the country that November.

She moved to San Francisco in 1994 when she was working for California's State Compensation Insurance Fund. It was at that time that she came out as transgender.