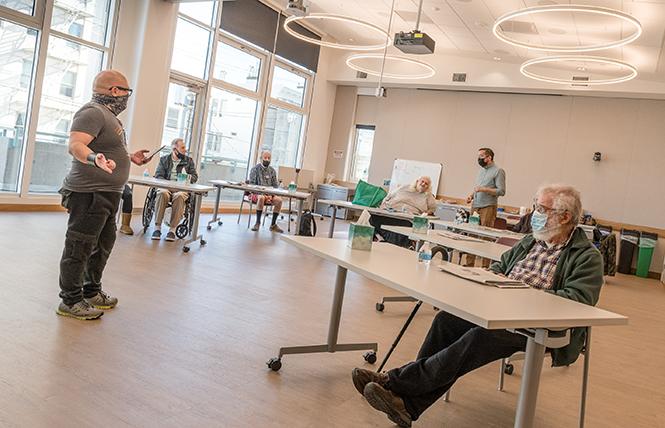 Since moving back to San Francisco in the mid-1990s after relocating to Seattle, David Crow hadn't felt much connection to the city's LGBTQ community. The 69-years-young gay man is self-admittedly shy and often feels isolated.

"Even though I live in San Francisco with lots and lots of people here, I still feel very alone sometimes," said Crow, who used to work in graphic design.

Several years ago he turned to Openhouse, the LGBTQ senior services provider, to be matched with someone through its Friendly Visitor program in order to have a social connection. He and his male match often got together at the Castro Country Club to talk over coffee.
"I appreciate Openhouse has helped me feel more comfortable as a gay man in San Francisco," said Crow. "I am not as uptight as I used to be."

It was through that connection that Crow first heard of the Openhouse + On Lok Community Day Services. It is the nation's first community-based adult day program co-designed for and with the LGBTQ+ community.

In design since 2018, the program had been expected to launch in 2019 when the new Openhouse Community Center at 75 Laguna was to have opened. But as the B.A.R. previously reported, construction issues pushed back that timeline and then the COVID-19 pandemic further delayed the two agencies being able to utilize the space for public programming.

It finally got off the ground September 28, when the community center soft opened. (See related story.) Currently operating three days a week, the day services program expects to have enrolled 25 participants ages 55 and older by year's end. Everyone has to get a temperature check and wear a mask.

For about a month Crow has taken part in the program, taking part in exercise classes, watching movies, and painting. Speaking to the Bay Area Reporter recently Crow said he has been recommending the other older gay men in his life to look into signing up for it.

"It's a great program. I am reaching out to a lot of old queens to come here," said Crow.

Because of the COVID pandemic, he had been mostly isolated at home until this past June, when he began to venture out again.

"This is teaching me structure and gives me somewhere to go everyday," said Crow, who lives in a residential hotel South of Market. "It has been lonely and miserable. I knew that I wanted to get out of that mood."

A key focus of the day services program is managing participants' ADLs, short for activities of daily living. It is broken down into five pillars of care, from the transportation and nutrition needs of the participants to their socialization, personal care, and therapeutic activities, explained Gessika Krieger, 38, the program manager hired by On Lok a year ago. A queer femme, she had worked for three years as manager of the adult day program at The Arc of San Francisco, which provides services for people with intellectual and developmental disabilities.

"We are client-centered in our approaches," said Krieger. "We meet our clients where they are and make sure we are listening to them." 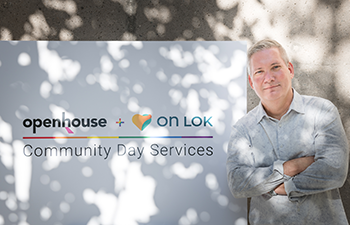 John Blazek, executive director of day services at On Lok, stood in an outside courtyard by the sign for the new Openhouse-On Lok program. Photo: Christopher Robledo

Unique program
What is unique about the program from other day services is that at every level it takes into account the cultural needs of the LGBTQ seniors, noted Ephraim Getahun, Openhouse's director of strategic partnerships and training.

"We really allow our community members to take control of how that care is going to be provided," said Getahun, 31, who is queer and first joined the agency two years ago. "It is unique because of the trauma our community has experienced in programs like this that rob people of their independence and autonomy."

Many LGBTQ seniors in the city are disconnected from their biological families who would be the ones expected to assist them as they age. They also are unlikely to have children to care for them, and many lost multiple friends and partners to AIDS.

"This is our family. Our bio families, for many of us, left us out to dry to figure it out on our own," said Getahun. "Already, we know this is going to be a successful program because the need is so severe. We are answering a call; the community demanded this of us."

Overseeing the day services program is John Blazek, 55, a gay man who also identifies as a member of the LGBTQ+ community. He is executive director of day services for On Lok and its chief development officer.

"This is the greatest thing I have ever worked on with On Lok," said Blazek, who joined the agency five years ago and for nearly three years has overseen its day services at the On Lok 30th Street Senior Center. "When we delayed, I was grateful we could do it better."

The agency worked with Openhouse on a needs assessment and an organizational readiness assessment to ensure it knew what LGBTQ seniors, their partners and caregivers most needed in the day services program and that its own staff was educated on working with older LGBTQ adults. As On Lok is not widely known as a provider of LGBTQ senior services, it wanted to ensure LGBTQ seniors would avail themselves of the day services program.

"We had to be more intentional and deliberate about it," said Blazek.

Surveys of the city's seniors programs have routinely found LGBTQ seniors are less likely to use them if they are not specifically marketed as being for the LGBTQ community. For instance, a 2018 Horizons San Francisco Bay Area LGBTQ Community Needs Assessment found that 54% of respondents had concerns about their physical or emotional safety when accessing health care, with 22% reporting their providers were only sometimes or never LGBQ sensitive. Such was the case for 34% of transgender and gender queer respondents.

"I don't blame our community for the lack of trust or suspicion or fear," said Blazek. "Many seniors fear they will have to go back into the closet or hide who they are, and we are going to break that."

Due to COVID-related capacity limitations the program worked its way up to 10 participants per day since launching with five dedicated staff members. Once the social distancing requirements lift the program should go up to having 125 participants. Some may take part a few days a week, while others may need to come five days a week once it adds Fridays and Saturdays to the schedule. At the moment the program is operating Tuesdays through Thursdays.

"COVID has been a pickle," said Krieger.

Participants are scheduled for either the morning or afternoon sessions, which each run roughly three hours. The cost is based on a sliding scale and covered by most participants' health insurance, with scholarship slots available for others.

Once it is safe to do so, the program will plan excursions to different cultural institutions and events for participants. It will also determine activities based on the seniors' interests, all with an eye toward alleviating any isolation they may be experiencing.

"We are going to be utilizing all this city has to offer," promised Getahun. "To age with dignity includes being able to thrive and not just about getting the bare minimum of care."

Openhouse Executive Director Kathleen Sullivan, Ph.D., a lesbian who joined the nonprofit this summer, told the B.A.R. that the success so far with the program is showing the partnership between the two agencies is working.

"We have proven the partnership works, it makes sense, and is very strong," said Sullivan, 55, who noted an activity therapist that had been volunteering was recently hired on as a staff member to work with the program participants.

A sign to Sullivan of the program's necessity was running into a man on the street in the Castro LGBTQ district who had brought his partner, who has Alzheimer's, for the day program and was able to take time for himself without worrying about his partner's well-being.
"Now, he drops him off and he has his own life," said Sullivan.

For Blazek, what touches him the most is seeing the connections the participants have made among themselves and with the program staff in such a short timespan.

"When the seniors are departing for the day having done a project and shared a meal together, and with kindness and gentleness the staff help them back to their home and family, it touches me. You can't put that in a plan," he said. "This is a gentle, kind and caring place. That to me is the most impressive and important thing I can say we have done over the last three months."

He added that the two agencies "want this to be the gold standard for LGBTQ+ senior care and want people to replicate this. Stay tune for this to be across the country."

To learn more about the day services program, click here.