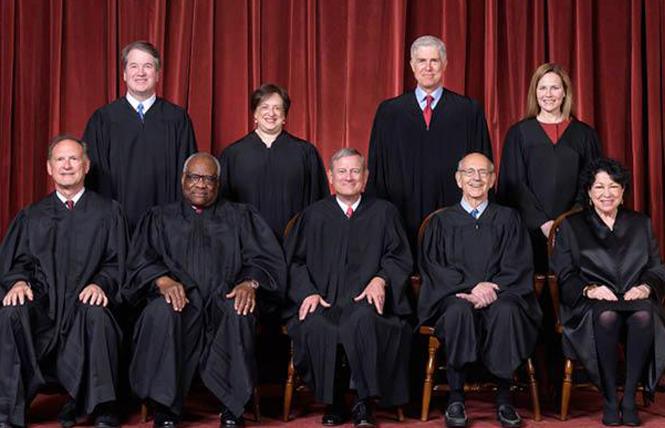 The U.S. Supreme Court seems poised to radically change access to abortion, and that could be trouble for same-sex marriage and other LGBTQ issues. Photo: Fred Schilling, Collection of the Supreme Court of the United States

The U.S. Supreme Court recently heard oral arguments in a case from Mississippi that could drastically alter the landscape for abortion access. Given the court's 6-3 conservative majority, it appears likely that Roe v. Wade, the landmark 1973 decision that protects a pregnant person's right to choose to have an abortion, and Casey v. Planned Parenthood, a 1992 case that reaffirmed Roe, will either be significantly undercut or perhaps overturned altogether. That's a frightening thought, but one that numerous legal observers believe to be the case. The Mississippi law bans most abortions after 15 weeks of pregnancy.

During the oral arguments, several justices explored a new way to view precedents, as the New York Times reported. "If the court overrules Roe, an increasingly real possibility, it will have to explain why it is departing from the principle of stare decisis, which is Latin for "to stand by things decided," wrote Times Supreme Court reporter Adam Liptak.

One concern for LGBTQ activists is how damaging a decision undermining such long-standing precedents might be to other Supreme Court precedents, such as Lawrence v. Texas (2003) and Obergefell v. Hodges (2015), as we reported in an online article after the oral arguments. That concern was heightened by comments from Justices Amy Coney Barrett and Brett Kavanaugh. Barrett said that upholding previous decisions is "not an inexorable command." She pointed to the 2003 Lawrence decision, which itself overturned the 1986 Bowers v. Hardwick decision and struck down state sodomy laws. That decision arguably opened the doors to marriage equality 12 years later in Obergefell. Kavanaugh also pointed to Lawrence as an example of the Supreme Court overturning its previous decision on an issue.

Sharon McGowan, legal director for Lambda Legal Education and Defense Fund, said the Lawrence and Obergefell decisions "expanded individual liberty, not the opposite."

The landmark LGBTQ rights decisions, she said, are ones "on which we rely today to protect our community's civil rights," adding that both "were built directly on the foundation of Casey and Roe."

Alison Gash, a professor at the University of Oregon, said Obergefell and Lawrence rest on the same legal precedent.

Any change to Roe or Casey would take away rights whereas Lawrence and Obergefell expanded rights. And NPR pointed out that the Texas attorney who conceived of that state's new abortion law (which the Supreme Court allowed to go into effect but heard oral arguments on in November) was quoted as saying that same-sex marriage and intimacy are "court-invented rights," meaning there certainly could be an effort to undermine them in the future, particularly in red states. This year's legislative assault on transgender people in numerous states also bodes ill for the LGBTQ community because it encourages state lawmakers to come up with even more extreme laws in an effort to test the courts.

We have relied on the court for decades because so many state lawmakers were hostile to us. Today, that is still the case in many statehouses, but now the courts are stacked with conservative judges. Trump had four years to fill lower court vacancies and got three Supreme Court picks. Notably, one of those, Neil Gorsuch, was because Senator Mitch McConnell (R-Kentucky), the majority leader at the time, withheld from President Barack Obama the ability to vote on a justice after the death of Justice Antonin Scalia. Barrett's confirmation was held in record time just weeks before the 2020 presidential election. Judging from their discussion during oral arguments, it appears that the conservative justices on the court no longer consider precedent important, and that's dangerous. LGBTQ legal observers are right to be worried about what the Mississippi case might mean for same-sex marriage and other precedents in the future.