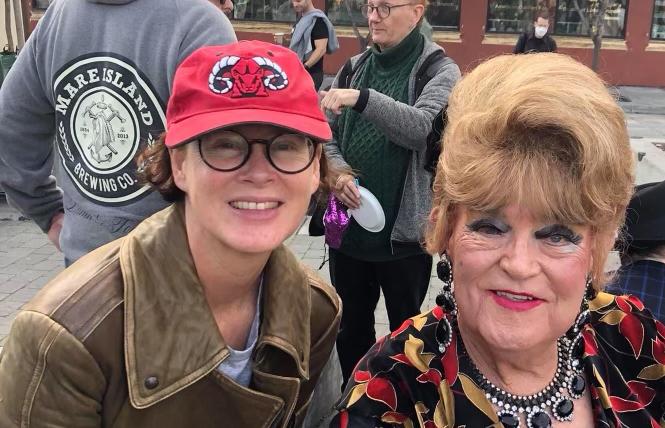 On February 15, San Francisco voters will participate in a special election to replace David Chiu in the California Assembly for District 17.

As the 25th empress of the Imperial Court System of San Francisco, and a former small business owner of Marlena's bar in Hayes Valley, I will be supporting Thea Selby because, not only is she the only woman in the race, she is a strong, proven progressive leader and citywide vote-getter who is accountable, pragmatic, and committed to being a progressive ally.

Selby has long been intimately involved with the struggle for anti-discrimination and has a demonstrated track record to back it up. She marched for social justice for Rodney King in San Francisco, stood up for women with a city boycott against Republican states that passed unconstitutional anti-choice legislation, and partnered with NARAL Pro-Choice America to strike down an intrusive parental signature bill. A longtime member of both the Harvey Milk and Alice B. Toklas LGBTQ Democratic clubs, Selby has been involved in electing and supporting many progressive LGBTQ officials including Mark Leno, a former state senator and supervisor. She supported out school board candidates Jamie Rafaela Wolfe and Mia Satya, though neither trans woman was successful in their campaigns. On the City College of San Francisco board, Selby, an elected trustee, has worked side by side with gay trustee Tom Temprano, and gay former trustees Alex Randolph and Rafael Mandelman, who is now the District 8 supervisor. (Temprano and Mandelman have endorsed another candidate).

Selby upholds the progressive values we hold dear and has focused her entire career on making sure all of San Francisco's diverse communities are heard, respected, and included. Her campaign for Assembly — which, if successful, will make her the first woman from San Francisco elected in two decades — is no different.

Why do we need Selby in the Assembly? The answer is twofold.

First, it is not an exaggeration that our Legislature is failing women. Women represent 50% of California but make up a pitiful 33% of the Legislature. It is shameful that the 17th Assembly District has not been represented by a woman in 20 years, since lesbian Carole Migden left the seat in 2002 and later served in the state Senate. This is hard to comprehend at a time when reproductive rights are under the most severe threat of being stripped away from us since the U.S. Supreme Court upheld Roe v. Wade in 1973. Electing Selby would mean a steadfast voice in Sacramento for issues that matter to women in California, from protecting pay equity and ensuring the right to critical reproductive health care to delivering quality, affordable child care and strong and effective services for families. Her victory would be a long-deserved win for gender equality and representation with ramifications both here and in the state Capitol.

Second, on other issues, Selby has been accountable for results, and I trust that she'll carry this reputation into the state Legislature. As a twice-elected City College board trustee — and the board's former president and vice president — Selby introduced and passed Free City — a partnership between the college district and the city of San Francisco — and turned around a college system drowning in debt, erased a multimillion-dollar deficit, and balanced the budget — all while securing the maximum level of accreditation for the school and putting the college system on solid fiscal footing. We know she will get results because she has.

Like me, Selby cares deeply about neighborhood safety in San Francisco. While each neighborhood has its own unique flavor, we share some similar concerns, and one of them is safety.

She believes that all of us in San Francisco — and across the state — deserve to feel safe. Especially communities with a history of violence being targeted against them, such as members of the LGBTQ, Black, Latino, and Asian communities, and women. Selby will put public safety first. After a double-murder occurred on her block in the Lower Haight, she created the Lower Haight Merchants & Neighbors Association to support local businesses and create a more safe, inclusive neighborhood. She spearheaded WalkStops to improve pedestrian corridors. I know Selby will go to Sacramento to get the resources we need to create safer, cleaner, and needle-free streets and neighborhoods.

Unlike some of her opponents who have consistently voted against all kinds of housing, Selby has effectively increased the affordable housing supply. Working together with the rest of the City College Board with the City and County of San Francisco, she negotiated 50% affordable levels for two different properties with over 1,000 units — 33 Gough and Balboa Reservoir. Legislative leaders in Sacramento need an ally like Selby who will pass important legislation to make San Francisco more livable for all of us.

She'll also address transportation to help our transit-dependent and reach our climate goals. As chair of San Francisco Transit Riders, Selby advocated for the past Free Muni for Youth program and the upcoming pilot program to make Muni free for all youth. She helped pass a half a billion dollar transportation bond to fund vital repairs to San Francisco Municipal Transportation Agency infrastructure without raising a penny on new property taxes. As a CCSF trustee, Selby asked for, received the backing of other trustees, and got the developers of Balboa Reservoir to commit to giving $400,000 for City College students that could be used to help run a campaign for a free or discounted Rams transit pass.

I trust Selby to be accountable and deliver for our families, our LGBTQ community, for women, and our futures. Why? Because she's done it before. I hope you will join me in voting Thea Selby for Assembly District 17 on February 15.

Marlena, also known as Garry McLain, is a former small business owner of Marlena's bar in Hayes Valley and the 25th empress of the Imperial Court System of San Francisco.