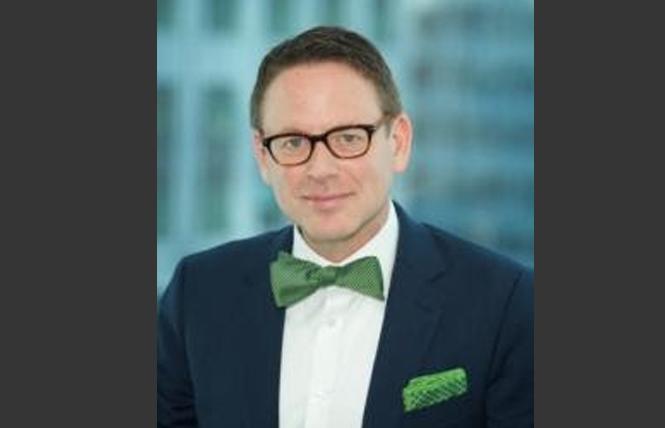 When attorney Peter E. Borkon takes his oath of office as a judge sometime in early 2022, he will bring the number of LGBTQ people serving on the Alameda County Superior Court to 10. His joining the East Bay bench will further cement it as having the largest contingent of out jurists of any superior court in Northern California.

Borkon, 50, is the second gay man Governor Gavin Newsom has appointed to fill a vacancy on the county court. Last December, Newsom tapped former law clerk Keith Fong, who was enrobed in March.

Newsom this year also named his former chief deputy legal affairs secretary, Kelli M. Evans, to the Alameda bench. A queer Black woman, Evans took her judicial oath in early October.
In a rare post-holiday release about his latest judicial appointments, as news about judge picks often comes on a Friday prior to a holiday weekend, Newsom announced Monday, November 29, that he had chosen Borkon to fill the vacancy created by the retirement of Judge Patrick J. Zika. It came in addition to the news that Newsom had nominated lesbian Sacramento County Superior Court Judge Laurie M. Earl to be the first LGBTQ person to serve on the 3rd District Court of Appeal. (See story, page 1.)

In a November 30 phone interview with the Bay Area Reporter, Borkon said, "It is quite the honor and deeply humbling to serve the people of Alameda County. I am grateful for the opportunity."

A graduate of Southern Illinois University Law School, Borkon first arrived in the Bay Area in 1998 after being hired as a civil research attorney at the 9th U.S. Circuit Court of Appeals. A year later he became a senior motions attorney for the federal appellate court.

"It is a stunning building," Borkon said. "Working in that building is like working inside a piece of art."

In 2001, he became a principal at law firm Cotchett, Pitre, Simon & McCarthy. He joined Schubert & Reed LLP as an associate in 2005 and, two years later, became a partner and associate at Hagens Berman Sobol Shapiro LLP in Berkeley. In 2019, Borkon became a partner at the Oakland office of Bleichmar Fonti & Auld LLP.

The San Francisco resident has yet to decide if he will relocate to Alameda County, as his not residing in the court's jurisdictional geographic area could become problematic if someone from the county decides to challenge Borkon for his judicial seat. Noting he has practiced law and worked in the East Bay county since 2007, Borkon told the B.A.R. he doesn't believe his living elsewhere should be a problem.

"I have been doing the cross-bay commute 15, 16 years, I think," said Borkon, who told the B.A.R. he expected to be fully apprised of the rules for judges and the details of his swearing-in ceremony in the coming weeks. "These are bridges we will cross when we actually get sworn in and actually start a courtroom assignment."

After a San Francisco Superior Court judge ruled in 1999 that a long-standing residency requirement for judges was unconstitutional, judges no longer must live in the county where they serve. A 2020 fact sheet about the state judiciary by the Judicial Council of California says nothing about where superior court judges, who serve six-year terms, need to reside.

They do need to be an attorney admitted to practice law in California or have served as a judge of a court of record in the state for at least 10 years immediately preceding their appointment or election, as their county's voters elect them on a nonpartisan ballot at a general election. It is exceedingly rare for a sitting judge to face a contested election in the Golden State.

Borkon had first applied for a judicial appointment with former governor Jerry Brown and reapplied with Newsom's administration in December 2019. He is the second former board member of the AIDS Legal Referral Panel to be named to the Alameda court, as Brown had appointed Jenna M. Whitman, a lesbian, to it in 2018.

Told of Borkon's appointment by the B.A.R., ALRP Executive Director Bill Hirsh said it was "great news." Borkon served on the legal nonprofit's board, including as its co-chair, in the mid-2000s.

"He is such a lovely guy. He is really bright. He is very dedicated and hardworking, and he is very compassionate," said Hirsh. "I think having somebody who understands some of the issues our folks wrestle with, and I think Peter has a good sense of what those issues are and how our clients struggle, I think will make for a great judge."

Having to leave his law firm and curtail his philanthropic work by becoming a judge is "bittersweet," said Borkon, who currently sits on the board of the San Francisco AIDS Foundation. He does expect to be able to help select the agency's new permanent CEO before having to resign from his seat.

"I love my practice, my law partners, and my teams. Having to consider which charities to depart from and those things is very bittersweet for me," said Borkon. "I have built very deep and lasting friendships in those circles. I think very highly of the work that is being done, so it is a loss for me in some ways to step down from those roles."

In the 2000s he co-chaired the Bay Area Lawyers for Individual Freedom's Judicial Nominations and Endorsements Committee. After applying to be a judge himself, Borkon found himself being interviewed by the LGBTQ bar association about his having the temperament to serve as a jurist.

"I strive to be curious, even-handed, neutral. I have seen a lot of good judges in my career; I've been at this quite a long time," said Borkon. "Listening, trying to understand and apply the law in a neutral manner to the facts of any given case is the cornerstone of what makes our judicial system great. I will certainly endeavor to try to be one of those judges."

As a child in Carbondale, Illinois, Borkon had his first introduction to the legal system when his parents divorced. No longer close with his father, Borkon and his younger sister have remained close with their mother and stepfather, who legally adopted them last year.

"The difficulty I saw in their interactions in the judicial system taught me, at an early age, that justice and how the courts manage their cases directly impacts the lives of people in the community," he said. "That sense of justice is something I have had a very long time in my life. I attribute a lot of that to those moments in my early childhood."

His entire legal career, said Borkon, has been about righting wrongs.

"While I have done that in a civil litigation context, I will be excited to hear the cases of the people who come before me in whatever courtroom I am assigned to and apply the law in an unbiased and diligent manner to the facts of those cases," he said.

Borkon has been with his husband, Kristofer Konietzko, who works at Salesforce, for nearly 12 years. He will earn $223,829 as a judge.

The first gay man to join the Alameda bench was Judge Tom Reardon, who has served on it for 23 years. The other four out female judges are Kimberly E. Colwell, Tara M. Flanagan, Karin S. Schwartz, Elena Condes, and Victoria S. Kolakowski.

Condes, who is Latina and became the first LGBTQ woman of color on the Alameda court in January, was elected last year to an open seat. Kolakowski is the state's lone out transgender jurist and is married to B.A.R. news editor Cynthia Laird.