by by Jay Blotcher and Cynthia Laird 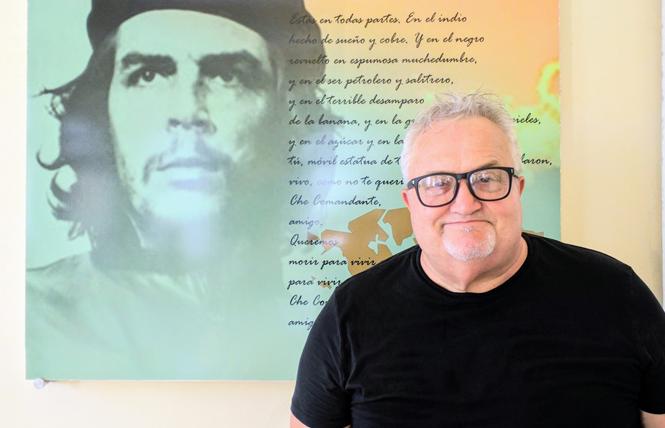 Veteran progressive activist and TV, film, and stage producer Scott Robbe died November 21, according to a statement by Paul Algiers, a longtime friend and the executor of Mr. Robbe's estate.

Mr. Robbe was in hospice care at the home of his sister, Angela, in Hartford, Wisconsin. He was 66. The cause of death was complications from myelodysplastic anemia, a blood cancer he had battled for more than a year. He had undergone stem cell treatment at Dana-Farber Cancer Institute in Boston in April of this year.

Jay Blotcher, who compiled this obituary, noted that Mr. Robbe was a gay man and a prominent member in the founding of two direct-action groups in New York City: ACT UP and Queer Nation. Mr. Robbe was a member of an ACT UP undercover team, led by activist Peter Staley, that secretly gained access to the New York Stock Exchange in September 1989. Their goal was to protest and publicize the record high price of AZT, then the sole approved treatment for HIV/AIDS. Drug maker Burroughs Wellcome eventually bowed to this nationally publicized activist pressure and lowered its drug price — then the highest in medical history — by 20%.

"Scott was a fearless activist, always on the front lines, whether he was protesting pharmaceutical company greed or homophobia at the Oscars," said ACT UP/New York veteran Ann Northrop. "And he was a total sweetheart."

"Scott was one of those activists who didn't flinch when our lawyers would warn us of all the possible charges and maximum sentences we'd face for infiltrating a powerful institution," said Staley, who chronicled his ACT UP days in the new memoir, "Never Silent." "When it came to fighting for his dying gay brothers, he'd always reply, 'I'm in.'"

In 1991, Mr. Robbe relocated to the West Coast and co-founded Out in Film, a Los Angeles-based group to battle homophobia in Hollywood filmmaking. At the time, several high-grossing films offered stereotypic and unflattering depictions of gay characters, including Jonathan Demme's "Silence of the Lambs," Oliver Stone's "JFK," and Paul Verhoeven's "Basic Instinct."

Out in Film demanded equity for LGBTQ people on both sides of the camera, Blotcher noted. Mr. Robbe and Lesbian Avengers member Judy Sisneros created a pioneering protest at the Oscar awards in March 1991, during which demonstrators outside the Dorothy Chandler Pavilion called for increased queer visibility and fairness in career opportunities.

The Oscars protest was one highlight of a life devoted to progressive activism. It began in his teen years, when Mr. Robbe took part in 1960s marches for the environment, for civil rights, and against the Vietnam War. Over the four decades that followed, Mr. Robbe's career encompassed both community organizing and producing dozens of works in theatre, film and television.

Scott Douglas Robbe was born on February 16, 1955, in Decorah, Iowa, to Helen, a homemaker, and James Robbe, a construction supervisor. The family relocated to Hartford, Wisconsin, the following year. Mr. Robbe was a graduate of Hartford Union High School in Hartford and entered the University of Wisconsin, Madison, in 1974, where he majored in theater arts. Located in the state capital, the college was known for its progressive student population, and Mr. Robbe took part in numerous protests.

After he graduated in 1978, Mr. Robbe moved to New York City, where he met his first boyfriend, a Bennington College student. They lived together in the East Village from 1978 to 1984. At the time, Mr. Robbe was helping to renovate the Orpheum Theatre on Second Avenue in the East Village. At the same time he produced at the neighboring Entermedia Theatre his first theatrical production, "False Promises," by the San Francisco Mime Troupe. At the famed La MaMa ETC, Robbe workshopped Harvey Fierstein's "Fugue in a Nursery," which forms the middle segment of "Torch Song Trilogy." That production won wide acclaim both there and after it moved to the Orpheum Theater. Mr. Robbe also produced several plays off-Broadway, followed by the Fierstein play "Safe Sex" on Broadway.

Mr. Robbe joined ACT UP/New York after seeing the group protest at the White House in October 1987 during the Second National March on Washington for Lesbian and Gay Rights. He joined the group's media committee and took part in numerous protests. He also joined the newly-formed Queer Nation in March 1990, helping to mount demonstrations across New York City aimed at queer visibility. Mr. Robbe was diagnosed as HIV positive in the early 1990s.

In late 1990, Mr. Robbe relocated to Los Angeles to produce TV commercials for Japanese television. His first film job was an associate producer role for 1982's "In the King of Prussia," depicting the Berrigan Brothers' pioneering anti-war efforts and starring Martin Sheen.

Mr. Robbe's extensive television credits include the first-ever LGBTQ comedy special for Comedy Central in 1993, called "Out There," and hosted by Lea DeLaria. Mr. Robbe was on the creative team for the groundbreaking 2003 series "Queer Eye for the Straight Guy." He also produced shows for Lifetime, Comedy Central, VH1, Children's Television Workshop and American Playhouse.

In 2005, Mr. Robbe was named executive director and film commissioner for Film Wisconsin Inc. During his tenure, Mr. Robbe brought 28 TV and film projects to the state, including the 2009 film "Public Enemies" by Michael Mann, starring Johnny Depp and Channing Tatum. Most recently, Mr. Robbe worked with activists in Cuba to bring pressure on the American government to distribute the COVID vaccine in the country. Mr. Robbe was also involved in grassroots activism in Puerto Vallarta, Mexico, where he had a second home.

Mr. Robbe is survived by his mother, Helen; and his siblings and their spouses, Royce (Donna), John (Ken Hall), Jay (Francine), and Angela. Also surviving him are his uncle Peter Coffeen (Steve Getz); as well as several nieces, nephews, and cousins.

There will be no funeral. A celebration of Mr. Robbe's life will be broadcast online early in 2022. Donations in Mr. Robbe's memory may be made to Broadway Cares/Equity Fights AIDS and ACT UP/New York.