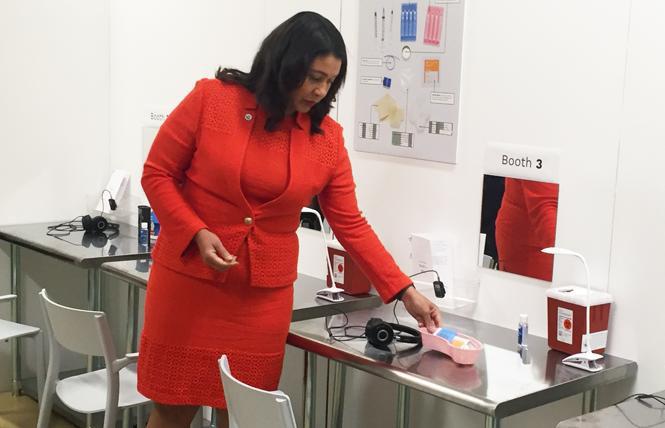 Last week, San Francisco Mayor London Breed said that she and the city are taking steps to potentially open a safe consumption site by next spring. The mayor introduced legislation to the Board of Supervisors November 16 that, if approved, authorizes the purchase of a site in the Tenderloin that could be used for that purpose. "The legislation is not prescriptive about what kind of services would be provided on the site," Breed spokesperson Jordan Wilson stated, but its purchase is "an initial step toward [the] possibility" of opening a supervised consumption site there. Wilson added that the city was in discussions with potential nonprofit partners and exploring the creation of a program to allow those partners to operate the facility.

Supervised consumption sites — also called overdose prevention sites or supervised injection facilities — are places where drug users can consume pre-obtained drugs under the supervision of trained staff. Advocates argue that these facilities are necessary for San Francisco, where the number of accidental drug overdoses dramatically rose from 259 in 2018 to 712 in 2020 — and is on track for a similar death toll this year. This city's grim statistics mirror what is a national crisis. The New York Times recently reported that Americans died of drug overdoses in record numbers as the COVID-19 pandemic spread across the country, according to federal researchers. "In the 12-month period that ended in April, more than 100,000 Americans died of overdoses, up almost 30 percent from the 78,000 deaths in the prior year, according to provisional figures from the National Center for Health Statistics," the paper reported. "The figure marks the first time the number of overdose deaths in the United States has exceeded 100,000 a year, more than the toll of car crashes and gun fatalities combined. Overdose deaths have more than doubled since 2015."

Locally, District 6 Supervisor Matt Haney's nonbinding resolution urging Breed to declare a state of emergency regarding overdoses was passed unanimously by the board in October. He told us he thought the resolution had an impact on Breed's decision to pursue the legislation. He noted that people continue to die on the streets, particularly in the Tenderloin, which he represents. He was inspired to write the resolution at the urging of Gary McCoy, a gay man who once battled addiction himself. McCoy, a co-chair of the Alice B. Toklas LGBTQ Democratic Club, is also director of policy and public affairs for HealthRIGHT 360; in August he staged a hunger strike outside City Hall to bring attention to the overdose issue.

HealthRIGHT 360 praised the mayor's move. "We know these sites work, and we look forward to our continued work with Mayor Breed and the San Francisco Department of Public Health to ensure these sites are effective and well-resourced," stated Vitka Eisen, president and CEO of the agency. HealthRIGHT 360 has been advocating for safe consumption sites for years, and supports legislation by gay state Senator Scott Wiener (D-San Francisco) to establish pilot projects in San Francisco, Oakland, and Los Angeles. Unfortunately, that bill has been held until next year; Wiener's previous efforts were also delayed, with one vetoed by then-Governor Jerry Brown. Wiener is supportive of Breed's recent action.

But first, there are legal questions that must be resolved. As we reported, supervised consumption sites could run afoul of federal law (the Anti-Drug Abuse Act of 1986). State law could also be a problem, which is why Wiener has proposed his legislation. David Chiu, the new San Francisco city attorney, voted in favor of the pilot programs when he was in the state Assembly, and we suspect his office would mount a robust legal defense of the city when it moves ahead with the program. His office couldn't directly comment, as it provides confidential advice to the mayor, city departments, and the Board of Supervisors, but his spokesperson did tell us the office is working with the city on the purchase of the site, which would be used for behavioral health services that "could potentially include a safe consumption site, among a number of other uses."

Here in San Francisco, we are all too aware of the overdose emergency. Earlier this month we reported on the medical examiner office's death reports for two gay San Francisco men — both died of accidental drug intoxication — one in 2021 in his home and one in 2020 on the street. Hundreds of other city residents have met similar fates. While a safe consumption site would not be a sobering center, it could provide an entry into harm reduction services for people. But more importantly, it would take some drug users off the street and provide supervision, potentially lessening the possibility of an overdose death. With 511 overdose deaths in San Francisco so far this year, according to an analysis by the San Francisco Chronicle, a safe consumption site is long overdue. We appreciate Breed's recent proactive efforts on state legislation and for pursuing this opportunity for the city to purchase property in anticipation of opening the first site.