Some World AIDS Day events returning to in-person this year 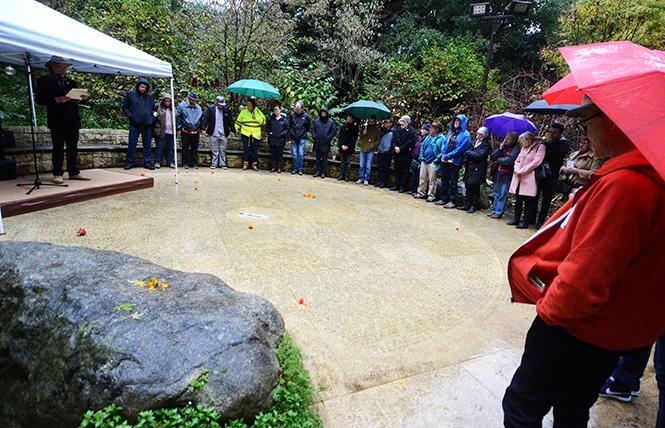 Newly engraved names in the Circle of Friends were read during activities on World AIDS Day in 2019 at the National AIDS Memorial Grove in Golden Gate Park. Photo: Rick Gerharter

Founded by the World Health Organization and the joint United Nations Programme on AIDS, World AIDS Day seeks to call attention to the global epidemic that has killed 36 million people since it was first discovered 40 years ago in 1981. The WHO's theme this year is "End inequalities. End AIDS."

The 30th anniversary of the National AIDS Memorial Grove will be celebrated at its Light in the Grove benefit Tuesday, November 30, at 6 p.m. at the tranquil dell in Golden Gate Park. Tickets are available online at EventBrite, starting at $250.

The event will be open air this year and "magically illuminated with artistic features and performances," according to the caretakers of the grove. Kevin Herglotz, the chief operating officer of the AIDS grove, told the B.A.R. that "we were planning to do everything in the tent at the grove," like in prior years, "but then we pivoted" after the rise of the Delta variant of COVID-19 in the summer. There were no in-person events during World AIDS Day 2020 due to COVID.

"As a virus-based organization, it's critical we ensure the safety of our stakeholders," John Cunningham, a gay man who is the CEO of the AIDS grove, told the B.A.R. "What we're also doing is we will have Light in the Grove illuminated for the community writ-large."

What Cunningham is referring to is a free, public display of the lighting being set up for Light in the Grove that will begin the next day at 4:30 p.m.

"The public is invited to stroll through the beautifully lit memorial grove, experience a candlelight reflection in the Circle of Friends, and watch the traditional reading of the newly engraved names added to the memorial and stitched into new panels of the AIDS Memorial Quilt," the release states.

The reading of the names the night of December 1 will be livestreamed, Herglotz said, with Cunningham adding that "this year, as opposed to last year where everything was 100% virtual, will be a bit of a hybrid."

Therefore, the in-person events will be supplemented by a World AIDS Day Virtual National Observance. This event will begin at 8:30 a.m. Pacific Time and will include "a series of conversations with national leaders on important topics about HIV/AIDS and health and social justice."

Firstenberg back in September installed over 660,000 miniature white flags on the National Mall to commemorate those lost to COVID. It was reminiscent of the displays of the AIDS quilt that have taken place on the Mall and was recently replicated in Foster City.

Conversations during the virtual program will include a look at the state of HIV and AIDS four decades into the epidemic and how the show "Pose" impacted viewers' thinking about the disease through its storytelling. Other panels will examine how HIV/AIDS has impacted the Black community, youth, older adults, and hemophilia survivors, while another will discuss how AIDS memorials like the grove have helped the country heal.

"This year's World AIDS Day observance will inspire people young and old, as we remember those we've lost, provoke thoughtful conversations about health and social justice, and bring hope to our nation with light and reflection," Cunningham stated. "As we look back at the past four decades, while there has been tremendous progress, it is time as a nation to come together and finally find a cure." 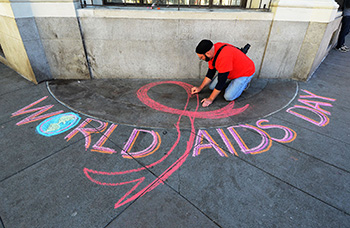 Michael Kerner, a volunteer at the Harvey Milk Civil Rights Academy, took advantage of the curve of the sidewalk at Castro and 18th streets to commemorate World AIDS Day for the Inscribe project in 2016. Photo: Rick Gerharter

Other SF events
The San Francisco AIDS Foundation will be holding a march and candlelight vigil in front of City Hall at 4 p.m. December 1.

"We will have a series of speakers to lift up the voices of people living with HIV and to visibilize the challenges our communities still face 40 years after the onset of the HIV/AIDS epidemic including a lack of HIV and aging services, housing insecurity, the overdose crisis, racism, transphobia, sexism and more," AIDS foundation senior community mobilization manager Ande Stone stated. "You're welcome to bring photos of loved ones you'd like to remember. We'll provide candles and signs."

Though this is an outdoor event, all participants are asked to wear a mask. Event organizers will provide masks to anyone without one.

Inscribe, a sidewalk art event, will be held on the 400 and 500 blocks of Castro Street from 9 a.m. to 9 p.m. December 1 for the seventh consecutive year.

"Inscribe honors the millions of people who died of AIDS globally, and it pays a special tribute to the men and women who died of AIDS that called the Castro home," according to a statement from the Castro Merchants Association. "At 9 a.m., Inscribe will strategically place containers of chalk on the sidewalks on both sides of Castro Street. Throughout the day, they will watch for anything inappropriate, like graffiti that has nothing to do with Inscribe, and they will remove it. At 9 p.m. Inscribe ends, and they will remove the containers of chalk. As in times past, the sidewalks are left with a patchwork of names and colorful sidewalk chalk art."

Bay Area events
On the Peninsula, CoastPride Inc. will be displaying a panel of the AIDS memorial quilt "with a local connection" at the organization's center at 711 Main Street in Half Moon Bay.

"CoastPride supporter and local business owner Christopher Childers will be there in person November 29 and 30 to share a first-hand perspective of the early AIDS epidemic and present a video interview with his sister, Soozi Childers, who designed the personal quilt panel," a CoastPride news release states.

"Also, to honor his commitment to AIDS advocacy, we have created a display of the T-shirt and memorabilia collection of the late Dr. Alvan E. Fisher, who in 1983 treated the first Rhode Islander diagnosed with AIDS, going on to become a pioneer in the treatment of people with the disease. Dr. Fisher's wife, Pamela Fisher, will be there in person on December 1 to share her experience during those days."

Vintage T-shirts, posters, and hats will be available to purchase with a $35 or more donation per item. There's a limited quantity and items cannot be released until December 3, after the exhibit ends December 3.

The panel and T-shirt and memorabilia collections will be displayed beginning Monday, November 29, through Thursday, December 2.

The next day, December 1, at 1 p.m. will be a flag-raising ceremony at 70 W. Hedding Street at McEntee Plaza. This event will also be livestreamed and will feature speakers from the Santa Clara County Department of Public Health's STD/HIV prevention and control program.

Rounding out the commemorations in the heart of Silicon Valley will be a candlelight vigil at San Jose City Hall December 1 at 6 p.m., hosted by Nicole Altamirano of Silicon Valley Pride. This event will be livestreamed on the Facebook and YouTube pages of the Pride organization.

In the East Bay, the Rainbow Community Center of Contra Costa County will be holding a vigil December 1 at 6 p.m. at gay dance bar Club 1220, located at 1220 Pine Street in Walnut Creek. On the event's Facebook page, people are asked to bring a candle if possible. People who want to volunteer are asked to contact the center.

In the North Bay, there will be "food, a speaker, a memorial tree, and the AIDS quilt" at an event December 1 at 5 p.m. at 150 Nellen Avenue in Corte Madera. This event is being hosted by the Spahr Center and the Marin County Care Council.