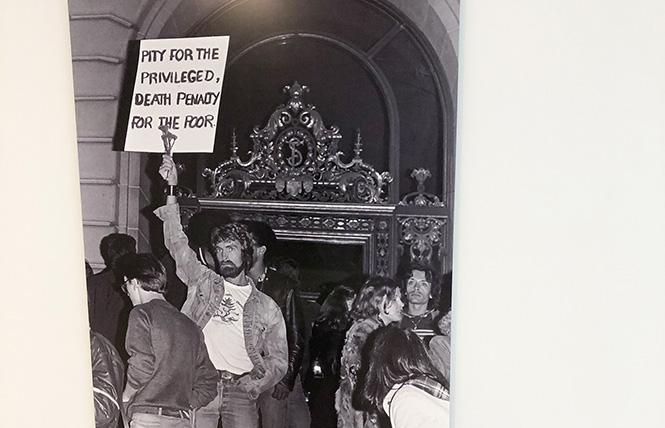 David Patrick Stucky, holding sign, was captured in Daniel Nicoletta's photo at the May 21, 1979 protest outside San Francisco City Hall shortly after the verdicts were announced in the trial of Dan White for killing supervisor Harvey Milk and mayor George Moscone. Photo: Matthew S. Bajko

Although surrounded by other protesters, the denim jacket clad man seems solitary as he hoists into the night sky with his right hand a protest sign written in all caps, as if silently screaming its message. It reads, "PITY FOR THE PRIVILEGED, DEATH PENALTY FOR THE POOR."

It refers to the jury verdict earlier that day of May 21, 1979 for Dan White, the disgruntled former San Francisco supervisor who assassinated gay supervisor Harvey Milk and then-mayor George Moscone inside City Hall the year prior on November 27. White was convicted of the lesser charge of manslaughter instead of first-degree murder for assassinating the two progressive politicians.

The outcome of the trial, famous for White's "Twinkie defense" that overeating sugary foods had diminished his capacity and therefore the killings were not premeditated, particularly enraged the city's LGBTQ residents. Many had gathered in front of, and on, the steps of City Hall that evening in protest of the leniency shown to White by the jurors.

Among them was David Patrick Stucky, a gay man who felt compelled to join in the public demonstration at the city's Civic Center. He ended up atop the steps to City Hall carrying the protest sign immortalized in a black-and-white photo taken by photographer Daniel Nicoletta, a gay man who was friends with Milk and documented the era through the lens of his camera.
"It was such a travesty that slap on the wrist they gave Dan White," Stucky, 77, told the Bay Area Reporter in a recent phone interview. "There wasn't a single gay human being or sentient human being who wasn't outraged by that, as far as I am concerned."

Nicoletta captured an entire city's rage in the eyes of Stucky, as they are wide open and appear to glare at the camera. Stucky's bearded mouth looks tensely drawn shut with his lips pursed tightly together. His entire visage drips with fury, while his left hand is nonchalantly placed inside the front pocket of his denim jeans.

"I didn't make that sign. I met someone who thought I was taller than them and gave me the sign," recalled Stucky. "I stood there holding that sign."

Shortly after the photo was taken, the first moments of what became known as the White Night riots occurred. People in the crowd in front of City Hall began throwing rocks at the building, hitting those gathered on the building's entrance staircase.

Raised in the Mennonite faith to be a pacifist, Stucky said he tried to convince the people to put down their stone ammo to no avail. One rock struck him in the forehead.

"I had blood streaming down my face," he recalled. "The cops started chasing us, so I made off and got to the Castro. I knocked on the door of the Midnight Sun."

Stucky took refuge at the gay video bar as police officers had gone into the LGBTQ neighborhood and started attacking people on the street and inside the bars, most famously at the former Elephant Walk now known as Harvey's at the corner of 18th and Castro streets.

"They let me in and locked the door behind me. All the bars were asylums for getting away from the cops," recalled Stucky, who lived in the Castro and the night after the riots started bartending at the Midnight Sun.

Unaware of photo
For decades, he was unaware of the powerful photo that Nicoletta had captured of him that evening. Despite Stucky being a self-described "foot soldier" on Milk's various campaigns for public office in the 1970s, he didn't personally know Nicoletta.

So when Nicoletta submitted the image to be part of a temporary photographic installation in the concourse of Harvey Milk Terminal 1 at San Francisco International Airport, he did so without the name of the man in the photo. SFO Museum curators initially displayed the photo with an accompanying identification panel that simply said an unidentified man "expresses his outrage at the sentencing of Dan White to a voluntary manslaughter sentence of seven years and eight months."

Unveiled to the public in July 2019, Gwenn Craig went to see the tribute to the terminal's namesake. A Black lesbian, Craig had worked closely with Milk and the late Bill Kraus in 1978 to defeat Proposition 6, which would have banned gays and lesbians and their straight allies from working as public school teachers in the Golden State. A photo of the trio on Election Night was among the 100 photos, correspondence, and campaign materials related to Milk's life chosen for the massive retrospective.

She also had been good friends with Stucky in the 1970s, often meeting up with him on Sundays in the backyard patio of a Castro business to work on crosswords in that day's newspaper. As soon as she saw Nicoletta's photo, Craig recognized the man at the center of it.

"Gwenn took a photo of it and sent it to me on Facebook," recalled Stucky, "so then I thought I like that picture and wanted to get a copy of it."

He reached out to Tim O'Brien, assistant director and curator of exhibitions for the SFO Museum, who worked on the Milk exhibit. O'Brien connected Stucky with Nicoletta, who sent him a silver plate copy of it.

The photo of Stucky from 42 years ago was one of the roughly 70 images used in the concourse exhibition repurposed for a new exhibit about Milk's life hanging on the walls of the Milk terminal's Federal Inspection Services Corridor. It ferries passengers disembarking from international flights assigned to one of seven gates at what is known as the A side of SFO's International Terminal to passport control.

The new exhibit also includes the photo of Craig with Milk and Kraus. After Craig told the B.A.R. in October she doubted she would ever see it, O'Brien reached out and invited her and her partner, Esperanza Macias, to come to the airport to peruse the installation.

"It was such a great moment to see the new international terminal named after Harvey Milk and the wonderful exhibit of Milk's life and work. Big props to the curating team who were incredible and gave Gwenn and me such a wonderful tour," Macias wrote afterward in a Facebook post. "I was moved nearly to tears and very, very proud to see Gwenn's fabulous photo. I have always felt her role has never received the recognition it should have in books and films."

During an exclusive look at the new exhibit O'Brien provided the B.A.R. last month, he recounted the story of how Stucky's name came to be added to the identification panel for the striking photo of him found toward the end of the customs corridor. Subsequently, the B.A.R. was able to reach Stucky in Provincetown, Massachusetts where he is currently living due to being unable to renew his visa in the United Kingdom.

Born and raised in Kansas, he fled the Sunflower State in the 1960s and enrolled at California State University, Fresno. A tuition hike for out-of-state students sent him back to his home state for college, but Stucky soon dropped out to enter the Peace Corps.

He was stationed in Thailand and spent several years in the Southeast Asian country. A registered conscientious objector in the Vietnam War draft, Stucky was assigned to a military hospital in San Francisco instead of being sent to fight. By 1969 he had completed his service and moved to London, where he modeled and waited tables at a West End restaurant frequented by stars of the nearby theater stages.

"For a brief moment in the sun it was famous, famous, famous," said Stucky, who met actors Maggie Smith and Laurence Kerr Olivier, among others, at the exclusive eatery. "I was just a starry-eyed farm boy from Kansas."

A love interest resulted in his jumping back across the pond, and after the relationship ended, Stucky was again living in San Francisco by 1973. Proudly out during the height of the gay liberation movement, Stucky volunteered his time to help elect Milk to public office. With his fourth candidacy, Milk became the first out elected official in California with his 1977 supervisor race victory.

"He was very gregarious," recalled Stucky. "He was such an extraordinarily generous human being personally."

Eventually, Stucky moved back to London and, at age 60, started an acting career. He has appeared in several movies, "a lot of fringe theaters," he joked, and Duane Mazey's one-man play about Mark Twain, which Dale Schierholt turned into a short film that can be seen here.

Thinking back to the night of the riots, Stucky told the B.A.R. it was a "line-in-the-sand moment" for those who were there signaling they weren't going to be treated as second-class citizens any longer.

"We did think we were changing the world and thought we would succeed because we had justice and love on our side. It was very hard to think we wouldn't succeed," he said. "Why that night was so profoundly unsettling and moving is because we didn't believe we would lose."

This year's annual Milk-Moscone vigil will begin at 7 p.m. Saturday, November 27, at Harvey Milk Plaza above the Castro Muni station at the corner of Castro and Market streets. Organizers invite the public "to remember two icons of San Francisco and to make their vision of a city of hope come alive."