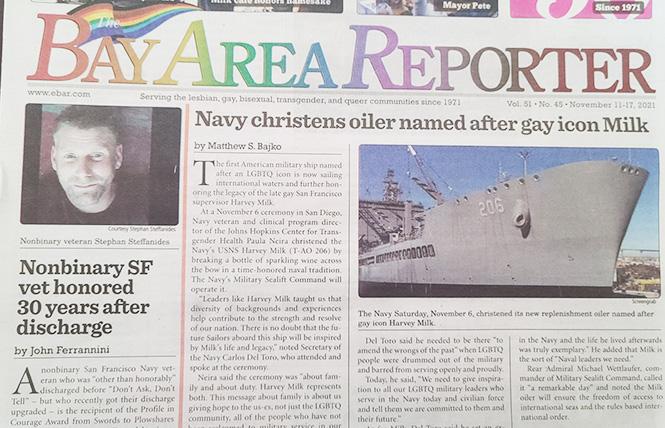 The Bay Area Reporter is changing its style to be more gender expansive. Photo: Cynthia Laird

The old saying "better late than never" certainly applies here. Effective immediately, the news section of the Bay Area Reporter is updating its style guidelines in order to be more gender expansive. We generally follow the Associated Press Stylebook, with some exceptions when situations warrant them. After discussing the issue, we have decided to change. Beginning with some articles in this week's issue, but more completely next week, we will drop gendered references like spokesman, spokeswoman, councilman, councilwoman, assemblymen, assemblywoman, congressman, congresswoman, etc. They will be identified as spokesperson, councilmember, assemblymember, congressmember, etc. We will note a person's gender if it's germane to the story, such as "the first out woman to hold office," and situations like that.

In recent weeks, some readers have contacted us to ask about our style and why we stuck with what is clearly outdated language. With this being Transgender Awareness Week, it made sense to update our style guidelines. As we have done for many years, the news section will continue to ask interview subjects how they identify under the LGBTQ umbrella or as straight allies, and report however they choose to identify and use the pronouns they prefer.

Thanks to those readers who contacted us — we're listening.