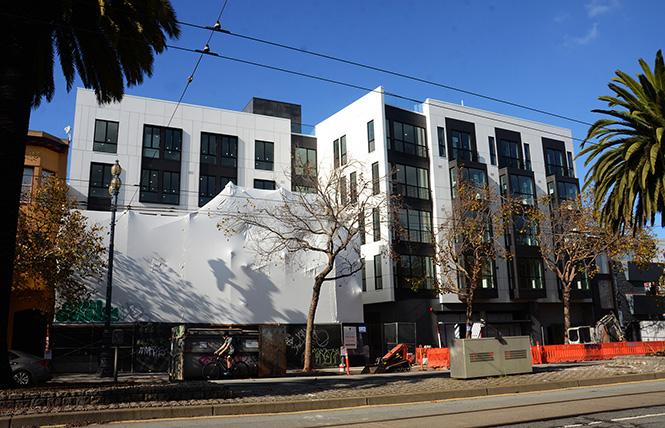 Construction continues on a 44-unit condo project at 2238 Market Street, the site of a former mortuary. Photo: Rick Gerharter

Would Harvey Milk, who organized the LGBTQ residents flocking to San Francisco's Castro district in the 1970s into a potent political force that helped elect him as the city's first gay elected leader, be able to afford to live in the City by the Bay today? It is a question his present-day successor on the Board of Supervisors, gay District 8 Supervisor Rafael Mandelman, poses at the start of a report he commissioned that examines how to construct more housing in the various neighborhoods he represents.

"It seems more likely than not that, after snapping some photos of the Golden Gate Bridge, enjoying the views from the top of Twin Peaks and maybe taking a ride on the Ferris wheel in Golden Gate Park, they would have concluded that the rent here is just too high and set off to find a more affordable place to make their home and their mark," writes Mandelman in his introductory letter, referring to Milk and his partner Scott Smith.

Noting "it's an unsettling hypothetical," Mandelman points out it is the current reality for many of those LGBTQ individuals, who like Milk, migrated to San Francisco five decades ago and planted roots in the city but now find themselves priced out of the local housing and rental market in their senior years. According to the report the median rent in District 8 was between $4,680 and $5,310 as of December 2019, while the average cost to buy a home was between $1.44 and $1.81 million.

Many of Milk's contemporaries, writes Mandelman, now face being "priced out of our City by the Bay or are hanging on by their fingernails in a rent-controlled unit, their only protection from being exiled from San Francisco in their golden years." The reality for "too many young people who still flock to San Francisco looking for the queer Oz that Harvey made," adds Mandelman, is they "find themselves sleeping in a doorway."

Simply titled "District 8 Housing Opportunities Report," the 40-page document examines the various housing issues confronting the Castro, Eureka Valley, Duboce Triangle, Noe Valley, Corbett Heights, Diamond Heights, Glen Park and parts of the Mission Dolores and Twin Peaks neighborhoods. It acknowledges that the Costanoan and Ohlone tribes were the first to settle in those areas of the city, which would go on to being settled and developed by waves of successive immigrants.

Conducted by consulting firm Street Level Advisors, with assistance from the Mayor's Office of Housing and Community Development, the report highlights how the 75,055 residents of District 8 as of 2018 are "impacted by the current housing crisis, both directly and indirectly, with significant risk of displacement and housing insecurity." It also noted that District 8 has a higher homeownership rate than the city overall (42.5% to 37.6%), with a correspondingly lower rate of renters (57.5% to 62.4%).

The report determined that approximately 53% of District 8's residential units are rent controlled, greater than the 37% of all such units citywide. Another 2,247 housing units in District 8 are subsidized, income-targeted units affordable to low- and moderate- income households, it noted, representing close to 6% of all housing units in the district. (That is less than the 9% share of such units citywide.)

Unsurprisingly for a report covering neighborhoods long favored by gay men and other LGBTQ community members, District 8 has a greater percentage of male residents than the city overall (56% to 51%), with the highest percentages found in the Castro/Upper Market neighborhoods, according to the report.

It added that there is a similarly higher percentage of male residents over the age of 65 (49.5% to 45%), also in and around the Castro district, than the city overall. Meanwhile, District 8 residents are more likely than citywide residents to live with someone they are unrelated to (17.2% versus 14.6% of all people), including an unmarried partner (5.8% versus 3.3%), according to the report.

Because the U.S. census doesn't ask about sexual orientation or gender identity, there is no accurate data on the exact number of LGBTQ people living in the Castro or other District 8 neighborhoods, though city officials estimate that LGBTQ people account for roughly 12% of the 875,114 people currently living in San Francisco.

While the report noted that fewer District 8 residents over the age of 18 were living in poverty in the past year compared to the city overall, it did find "a significantly high percentage of seniors (18% to 24%) living between Castro and Dolores streets, south of Market to 22nd, were living below poverty levels, well over the citywide average (13.1%)."

According to the report, 1,465 new housing units have been built in the last 10 years in District 8, representing 5.2% of the total new units citywide, and only 306 were affordable. Of the 527 new units approved to be built in District 8, only 146 are to be affordably priced, noted the report, which at 28% is below the city's 30% threshold for all new housing units being built to be affordable.

"There has been a ton of displacement and there remain a ton of long-term tenants who have a lot of fear about being evicted and having nowhere in San Francisco where they can afford to live," Mandelman told the Bay Area Reporter in discussing why there was a need for the housing report and his reaction to its conclusions and suggestions. "Some of the interesting things that came out of the report are the small sites program, and in fact affordable housing development in general, hasn't been as successful in District 8 as it should have been."

The small sites program sets aside money for the city or nonprofit groups to acquire smaller buildings with five to 25 units in order to preserve them as affordable housing. Unlike other LGBTQ neighborhoods in the city, such as the Tenderloin and South of Market, there isn't a nonprofit housing developer solely focused on District 8.

Mandelman has been in talks with Habitat for Humanity to do more small-scale infill projects in District 8. It oversaw a project that brought eight new units of housing to Amber Drive in Diamond Heights, and Mandelman told the B.A.R. he believes there are additional sites where such a project would be feasible.

"I think we should do that as it makes sense for District 8," he said. 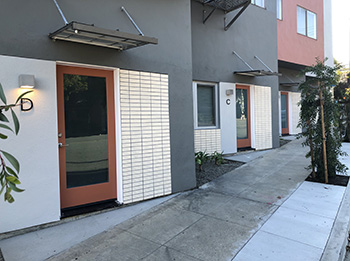 The Castro
One area of the district that has seen considerable housing development in recent decades has been the Castro, particularly along the upper Market Street corridor. A number of mixed-use developments with housing above ground-floor retail spaces have been built, with some including on-site below-market-rate units either for sale or to rent.

The newest will be the 44-unit condo project at 2238 Market Street by the Prado Group Inc. It broke ground in July 2019 and is repurposing a former mortuary and its parking lot into housing and sidewalk-fronting storefronts, with five of the condo units to be sold as affordable.

Initially to be completed in early 2021, the homes are now slated to begin selling toward the end of the year. Several other housing projects are moving forward in the upper Market Street corridor.

Two years after property owner Ty Bash first revealed plans to demolish the brick building that for years had housed Sparky's Diner on Church Street to build a 22-unit housing development, he is now seeking permits for a 24-unit building at 240-250 Church Street that would house current tenant Thorough Bread and Pastry in a brand new retail space. Two of the homes would be sold as affordable, while Bash is proposing to also pay an in-lieu fee to the city toward building additional affordable units off-site. A hearing is tentatively set before the planning commission on December 2.

Affordable housing developer Mercy Housing and Openhouse, a nonprofit provider of LGBTQ senior services in San Francisco, are developing a 120-plus unit building of affordable housing aimed at LGBTQ seniors at 1939 Market Street, with construction likely to begin in 2023. The city acquired the triangular 7,840 square foot lot at Market and Duboce Avenue not far from the LGBTQ-affirming senior housing on Laguna Street overseen by Mercy and Openhouse.

According to the housing report most of the housing gains in District 8 since 2010 (between 20-30%) have been centered around Castro Street south of Market and west toward Twin Peaks. Meanwhile, Duboce Triangle (-4.7%) and the Liberty Street area of the Mission (-13.4%) lost significant population since 2010, it found.

One solution property owners have turned to for adding new units in their existing buildings is converting garage spaces into housing. The building at 2775 Market Street, for example, added four new units recently via such a conversion.

The city's planning commission in October rejected complaints from neighbors of 642 Alvarado Street who argued the owner of the 34-unit Noe Valley building should not be allowed to turn 19 of its existing 35 parking spaces into nine new housing units. With such conversions increasingly popular with building owners, the supervisors recently voted to restrict landlords from removing existing laundry, parking, or storage areas in order to build accessory dwelling units.

In-lieu fees criticized
A proposal not recommended in the report but long advocated for by some affordable housing advocates is to require developers to include their required below-market-rate units on site instead of being able to pay an in-lieu fee that the city can use to build the housing elsewhere. The issue has come up with a controversial market-rate housing project proposed for the hillside at the intersection of Diamond Heights Boulevard and Diamond Street.

Developer On Diamond LLC is seeking approval to build 24 new luxury homes and intends to pay close to $3 million to the Mayor's Office of Housing and Community Development so it doesn't have to set aside some as affordable housing. Nearby residents are opposing the plans, arguing the entire project should be affordable.

A hearing before the planning commission has been delayed for months, with the latest scheduled date being Thursday, December 2. Developer Marc Babsin recently told the B.A.R. that he and the project opponents "are in conversations" about reaching a compromise.

"We are in desperate need of housing in San Francisco, particularly family housing," he said. "This project is all three-bedroom homes, which is family housing. Noe Valley, Glen Park, and Diamond Heights have produced no projects of 20 or more homes in the last four decades."

The in-fill project is representative of the various difficulties that can arise with housing developments not only in District 8 but anywhere in the city. Competing interests often collide and lead to protracted fights over design issues and the inclusion or omission of on-site affordable units.

The District 8 housing report identified 64 sites with likely housing development potential across the city's central neighborhoods, allowing for about 3,196 new units of housing based on current zoning. Of those, it estimated that 623 would be below-market-rate units.

A key issue made clear in the housing report is the lack of large undeveloped lots in District 8 that could be redeveloped with a sizable housing project of 50-plus units. Some of the few potential sites are parking lots owned by religious groups and suburban-styled shopping plazas with large parking lots in the Castro and Diamond Heights.

With the Safeway in the Castro in the news of late for closing its doors at night reportedly in response to increased shoplifting, there is renewed talk of seeing its upper Market Street site be redeveloped to bring in housing. Previous discussions of such a possibility faltered due to the property being owned by different parties.

Even though a 2019 voter-approved bond measure that Mandelman backed directed $600 million for affordable housing to supervisorial districts like his that have seen high numbers of evictions but few new below-market-units be built, he conceded there aren't that many opportunities to build such projects in District 8.

"I think we need to find more of those sites that are good for tax-credit funded projects," he said. "Undeveloped lots are the sweet spots for significant affordable housing projects."