by Gwenn Craig and Esperanza Macias 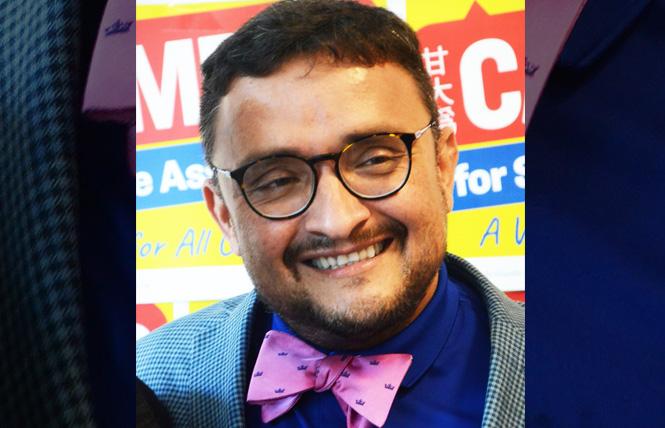 If elected, David Campos would be the first formerly undocumented, Latinx, and LGBTQ person to ever represent San Francisco in the California State Assembly. As a community, we know that representation matters. Equity, intersectionality, and lived experiences matter, not just abstractly, but as active reflections of our values. As queer and trans progressives who seek to hold political and corporate power accountable, political values, policy positions, and a track record that backs those positions up, matter too.

Lived experiences shape the policies, priorities, and perspectives of our elected leaders. We work to elect queer leaders because they have "walked in our shoes." Over Campos' history of introducing and implementing progressive legislation in the LGBTQ community when he represented District 9 on the San Francisco Board of Supervisors, we know he will continue to promote our concerns. However, few recognize that Campos' footprints are also a product of his experience as an immigrant.

Growing up in Guatemala, Campos witnessed this country's increased militarism, torture, and violence. Like countless immigrants whose lives were threatened, Campos' parents made the painful decision to protect their family and seek safety and opportunity in the United States.

For many who only know about Immigration and Customs Enforcement, or ICE, from a distance, Campos brings firsthand experience. First when he was 11, his family tried to cross the border, hiding in the empty tombs of a cemetery. They were caught, sent to an immigration center, and spent a week in jail before being deported back to Guatemala.

When he was 15, Campos, his mother, and sisters tried again. Carrying his 5-year-old sister while his mom took his 8-year-old sister, they walked all night, wondering if they would finish their journey alive. Eventually arriving in Los Angeles, Campos and his family slept on the floor of a friend's house for over a month before his dad, who had arrived in the U.S. earlier to try and find work, found a tiny apartment. Seeing his parents struggle to make ends meet as a janitor and factory worker, Campos learned, at a visceral level, the plight of workers in California.

But the original problem remained: Campos was still undocumented. Stanford University accepted him as an international student, where he survived on loans and grants. For two years, he lived in constant fear of deportation. Finally in his junior year, Campos obtained documentation to stay in the United States and apply for citizenship.

Campos' lived experience mirrors that of countless immigrants who face the same fears: first from their countries of origin, and then from deportation. He can "walk in the shoes" of the many nameless immigrants who fight for freedom and opportunity today. What better time to bring this intersectional experience to the California Assembly?

In "The Hope Speech," the late Harvey Milk spoke about the many young gay people in "Altoona, Pennsylvanias and the Richmond, Minnesotas" that needed hope "for a better world, for a better tomorrow, for a better place to come to if the pressures at home are too great." Campos' story extends Milk's visionary reach to the Guatemalas, Mexicos, and Nicaraguas of the world, all of which need hope. So it was fitting that then-supervisor Campos introduced legislation to name the new San Francisco International Airport terminal Harvey Milk Terminal 1 to extend Milk's message of hope as a welcome to visitors.

Campos' track record and life experiences link San Francisco as a sanctuary city for both the LGBTQ and immigrant communities. It's time for San Francisco to recognize how our diversity and intersectionality are values that can be embodied by the lived experiences of our elected candidates.

Please join us in supporting David Campos for California State Assembly. For more information on his campaign, visit the website.

Gwenn Craig is a former president of the Harvey Milk LGBTQ Democratic Club, a former San Francisco police commissioner, and worked with Harvey Milk as co-manager of the 1978 campaign against the Briggs initiative. Esperanza Macias is a former vice president of the Milk club, was the Northern California field coordinator of the No on Knight Campaign in 2000, and is the current director of policy and communications of Instituto Familiar de la Raza. Craig and Macias have been joined in a life partnership for the past 19 years.