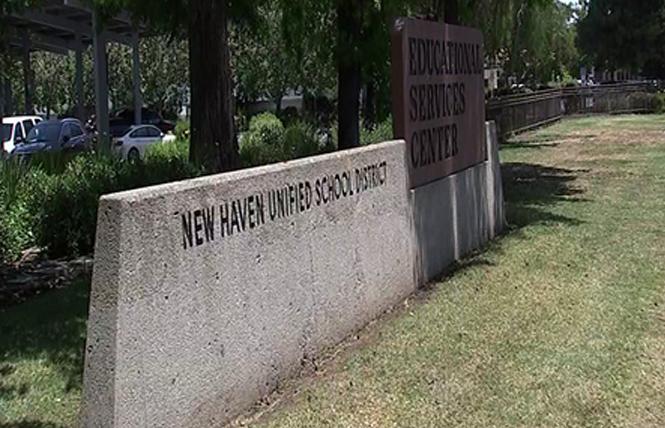 The New Haven Unified School District board is moving ahead with a transgender student policy. Photo: Courtesy KGO-TV

An East Bay school district is the latest to consider adopting a comprehensive policy to protect the rights of its transgender and nonbinary students. It comes as several hundred parents have objected to the reading of a book about LGBTQ history to a fourth grade class as part of the district's LGBTQ History Month observance in October.

At its November 9 meeting the New Haven Unified School District board took up the trans student policy, which its policy review committee had advanced in late October. The district has more than 11,000 students in Union City and part of south Hayward in Alameda County enrolled in its elementary, middle, and high schools. 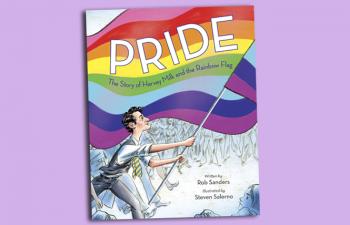 Parents objected after a teacher read the book "Pride: The Story of Harvey Milk and the Rainbow Flag,"

The policy lays out in roughly eight pages the various rights that the district's trans, intersex, and nonbinary students should be afforded, from the usage of their preferred names and pronouns, to access to the bathroom at school and the ability to play sports according to their gender identity. Much of it is already mandated by various California state laws that have been adopted over the years to ensure non-cisgender students throughout the Golden State have access to an education free from discrimination.

Nonetheless, incidents continue to come up with district employees not adhering to the proper procedures and guidelines when it comes to the rights of trans, intersex, and nonbinary students, school board member Melissa Shuen-Mallory told the Bay Area Reporter in a phone interview ahead of the meeting November 9. A nonbinary queer femme who lives with their wife in Union City, Shuen-Mallory is the lone LGBTQ person on the board and worked with school district staff to draft the policy.

Shuen-Mallory was motivated to do so because their friend's child is transitioning in a nearby school district and has encountered various issues since coming out about their gender identity. And when talking to students of the New Haven Unified district in September at an event, Shuen-Mallory learned about their also having issues with their teachers addressing them by the correct names and pronouns.

"The idea came to me because there were all these policies happening nationwide in many different states against transgender students competing in sports that coincide with their gender identity," said Shuen-Mallory, referring to Republican-sponsored bills that require students to play on athletic teams based on the sex they were assigned at birth. "I knew there was a law here allowing transgender students to play on the sports team that best aligns with their gender identity, but I wanted us to have something that really lays out what our policy as a school district is to be in compliance with state law."

Doing so also makes it easy for students, parents, school staff, and district administrators to find and know what the policies and provisions are, pointed out Shuen-Mallory.

"Our policy as a district is to give them a safe and affirming education," they said.

As a guiding principle, the document clearly states, "there are no medical or mental health diagnoses or treatment thresholds that students must meet in order to have their gender identity recognized and respected." Every student has the right, it notes, "to change their name, pronoun, attire, and access to district programs, activities and facilities."

It also covers privacy concerns, so that a student's gender identity is not inadvertently disclosed to their parent or guardian without their permission in instances where they may not be out to them. It stresses that school personnel should consider students' "safety, health, and well-being" when deciding whether to disclose their gender identity or expression to parents.

The policy also reiterates state law on updating students' names and pronouns on their academic records once they have been legally changed. It lays out how to update school records when a student in kindergarten through 12th grade is using a different name than their legal one in class and specifies that they should be addressed by the name and pronoun corresponding to their gender identity even if they haven't changed them via the courts.

The school board is expected to vote on adopting the policy in early 2022, as district staff needs to bring it back to the policy committee for additional review when it next meets in January. As Shuen-Mallory's colleagues unanimously voted to fly the rainbow flag at all school sites in June for Pride Month and to observe October as LGBTQ History Month, they told the B.A.R. they expect the trans student policy to also be approved on a 5-0 vote next year.

Trustee Lance Nishihira spoke in favor of adopting the policy but raised several questions for staff to look at in order to fine-tune the language in it. Some issues raised by the district's legal counsel must also be reviewed before the board can vote.

"I am really in favor of having a transgender student policy," he said. "I want to make sure this important policy is done really well and comprehensively."

Already, the school district has taken steps to ensure that students' preferred names and pronouns are being noted on the class rosters teachers use, said Shuen-Mallory, after they alerted the superintendent about the issue earlier this fall. The district is also ensuring there is a field for such information when it updates its record-keeping system, Shuen-Mallory added.

San Francisco's public school system in 2003 was the first in the country to adopt a policy protecting its transgender students. Numerous other school districts have since followed, including ones in Los Angeles, Oakland, and Berkeley.

Due to the recent laws state Legislatures have adopted restricting the rights of trans students, school districts across the country in recent months have taken up the adoption of a transgender student policy. Debates have flared up among school boards in Virginia, New Hampshire, and Michigan this year over the issue.

The review of such a policy at New Haven Unified comes amid a debate about a teacher at its Tom Kitayama Elementary School reading Rob Sanders' 2018 picture book "Pride: The Story of Harvey Milk and the Rainbow Flag" to 8- and 9-year-old fourth graders. While the book is meant for readers age 5 to 8, some parents felt it was not age appropriate, and roughly 200 signed a petition denouncing its being read in the classroom last month, Shuen-Mallory told the B.A.R.

Another issue is that the book is not part of the district's recommended curriculum or approved as a supplemental material for teachers to use. Because those decisions are made by district staff and not the purview of the school board, Shuen-Mallory told the B.A.R. they were limited in discussing the appropriateness of the book.

"As a member of the LGBTQ+ community, to me it didn't seem controversial, but some people thought it was controversial and it became controversial because of the parents' reactions," they said. "Now we have to make sure everything is vetted and teachers have guidance on what is appropriate and what is not. It is just sad that this was controversial."

During this week's board meeting Shuen-Mallory held up a copy of the book and suggested those parents objecting to it should read it for themselves. Calling it not age appropriate they argued was a straw argument for their opposing the teaching of LGBTQ topics in school.

"To me that is a trigger word, that tells me you don't have any other reasons other than your own ignorance," said Shuen-Mallory.

The district had already been moving to create an LGBTQ+ advisory group to put together approved supplemental materials for LGBTQ History Month, as it is doing for all such months it celebrates like Black History Month and Filipino History Month, said Shuen-Mallory.

"This incident fast-tracked that process," they said.

Political Notebook: CA renews its End of Life law for another 6 years
Sign up!