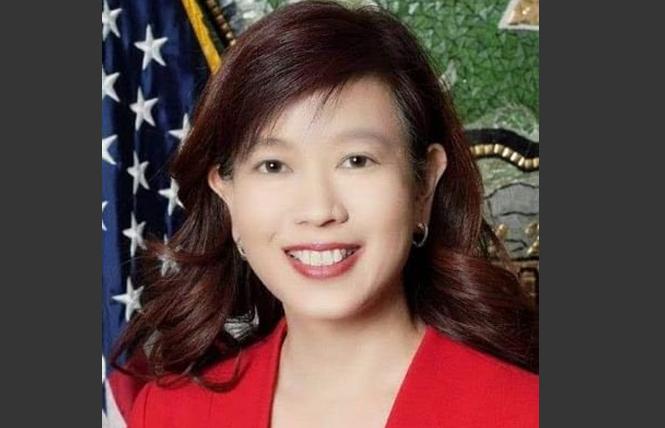 Fremont Mayor Lily Mei is the first person to be deemed anti-LGBTQIA+ under a recent bylaws change adopted by the Democratic Party in Alameda County. It means she will no longer be eligible to be endorsed by it, nor will anyone who personally endorses her going forward.

That could mean local officials who are endorsing Mei's 2022 bid to succeed Senator Bob Wieckowski (D-Fremont), who will be termed out of his 10th Senate District seat, will be deemed ineligible to be endorsed by the Alameda County Democratic Central Committee in their next campaigns, like Fremont City Councilmen Rick Jones and Raj Salwan. It could also cause problems for Congressman Ro Khanna (D-San Jose), who is among Mei's endorsers and was one of three central committee members to vote against the charges brought against her, prompting his proxy Martha Kreeger, a queer mother of two gay children, to resign.

At a special October 14 meeting to consider the matter, 31 central committee members, or 91.9%, voted in support of finding that Mei was in violation of the local party's new policy not to endorse candidates who take actions against LGBTQ rights. The decision came a month after the Alameda County Democratic Party became the first in the state to expressly restrict its support from candidates seeking elective office deemed to be anti-LGBTQIA+.

As the Bay Area Reporter previously reported, it was apparent that the endorsement ban would present an issue for Mei, who went from being an independent to registering as a Democrat when she ran for reelection as mayor in 2020. Back in 2010, when she served on the Fremont school board, Mei voted against a resolution to declare May 22 as Harvey Milk Day in honor of the slain gay San Francisco supervisor, who in 1977 became the first LGBTQ person elected to public office in California.

Mei was specifically mentioned during the central committee's June meeting when the new endorsement policy was first brought forward as well as by several of its out members in interviews earlier this summer with the B.A.R. regarding the proposal. According to the formal charges filed against her last month, Mei was accused of being anti-LGBTQIA+ for also voting against the inclusion of several books written by queer authors from an AP English curriculum when she was on the Fremont school board.

She also came under criticism for not issuing a public apology for her votes or acknowledging the harm they had caused for LGBTQ students and others in the community. She was also derided for using a photo on her Senate campaign site of herself with Alameda County Supervisor David Haubert, who initially voted against flying the Pride flag when he was Dublin mayor.

Elected committee member Lance Kwan, a gay man who co-chairs the bylaws committee, argued that it was time for the local party to take a stand against Mei. An elected member of the Ohlone College board, Kwan was a Fremont Unified student when Mei served on the school board.

"Did she endorse inclusive candidates for school board? Well, not in the last election," said Kwan. "She takes contributions from conservative parts of our community not supportive of their LGBTQ brothers and sisters."

Central committee member Melissa Shuen-Mallory, a queer nonbinary femme who serves on the board of the New Haven Unified School District, argued that Mei's actions on the school board continue to reverberate today, with LGBTQ students like her goddaughter continuing to face discrimination and feel unsupported by school administrators.

"This is a very important issue that affects our children day-to-day and affects our LGBTQ+ adults," said Shuen-Mallory, who was among the committee members to push for adoption of the endorsement bylaws change. "This is looking for patterns and seeing if this is someone we want in our Democratic Party."

Speaking in her own defense, Mei told the committee members that she never voted to ban any LGBTQ books from being made available to Fremont students. As for recognizing Harvey Milk Day, Mei argued she was supportive of adding Harvey Milk Day to the school calendar in addition to honoring other local civil rights leaders, which she noted took several votes by the school board to make happen.

"I think it is important for us to be able to honor that and we have been able to do that and celebrate that in the community," said Mei of Milk day.

She also pointed out that as mayor she has routinely proclaimed June as Pride Month, raised the rainbow flag at Fremont City Hall, hired LGBTQ people to important city positions like city manager and police chief, and appointed out members to various city oversight bodies. The photo of her with Haubert was taken with other local mayors who had joined the group Mayors Against LGBTQ Discrimination during a convention for municipal leaders from across the country held in Boston one June where they walked in that city's Pride parade.

"I know the local party has endorsed candidates with the same voting record. I hope you provide me with the same grace for my votes. I have changed, given they were a decade ago," said Mei, adding that she has backed several LGBTQ candidates in recent years. "I hope the committee considers my rich history of support for LGBTQIA+ rights today."

One of those out candidates endorsed by Mei was gay El Cerrito City Councilman Gabe Quinto, who submitted a letter in support of her that was read during the central committee meeting in which he said Mei was "not anti-LGBTQ and I would never support her if she were." In a phone interview with the B.A.R., Quinto blasted the local party's decision against Mei.

"She was one of the first to come around and support us, and people change over time and they come around. I am not going to use one incident to do this litmus test on her," said Quinto, one of the few HIV-positive elected leaders in the Bay Area who plans to seek a third and final four-year council term next November. "She is one of the best mayors in Alameda County representing one of the most successful cities, the city of Fremont. She has supported our community and mentored many LGBTs over the years."

The immediate past president of the League of California Cities' LGBTQ Caucus, Quinto called the vote against Mei "a witch hunt." He said other LGBTQ leaders privately share his concerns but are afraid to speak up publicly.

Assemblyman Bill Quirk (D-Hayward), a member of the central committee, did speak in favor of Mei. He noted that he signed the marriage certificate for his daughter, who is bisexual, when she wed her wife and that his brother "was gay before it was popular."

"I just want to say I don't see the evidence that Lily Mei is currently a homophobe, not based on what she is doing," said Quirk, who is seeking reelection next year to his 20th Assembly District seat.

He noted that the central committee has the option to endorse someone else in the state Senate race, which could be impacted by the redistricting process underway and result in Fremont being carved into a different Senate district.

"If you don't think we should endorse Lily Mei, fine," said Quirk.

As for Quirk, he is likely to be challenged by gay nurse and union leader Jennifer Esteen, who would be the first out Black member of the Legislative LGBTQ Caucus if elected. Although Quirk is not listed on Mei's campaign website as one of her endorsers, his support of her likely means he has little chance of being endorsed in 2022 by the central committee.

"This is something the Republican Party does," said Quirk of the vote against Mei. As for the Democratic Party, he said, "We believe people can change and, when they do, we should accept them for what they are."

Annie Koruga, a queer member of the Alameda central committee who took the lead role in drafting the bylaws proposal, told the B.A.R. that the vote against Mei sends a powerful message to other elected officials that homophobia will no longer be tolerated or brushed aside by the local party.

"Both queer people and straight allies seem to be taking queer issues and anti-LGBTQIA+ discrimination quite seriously," said Koruga.

Web Extra: For more queer political news, be sure to check http://www.ebar.com Monday mornings for Political Notes, the notebook's online companion. This week's column reported on a slew of endorsements various LGBTQ candidates in California have recently racked up.